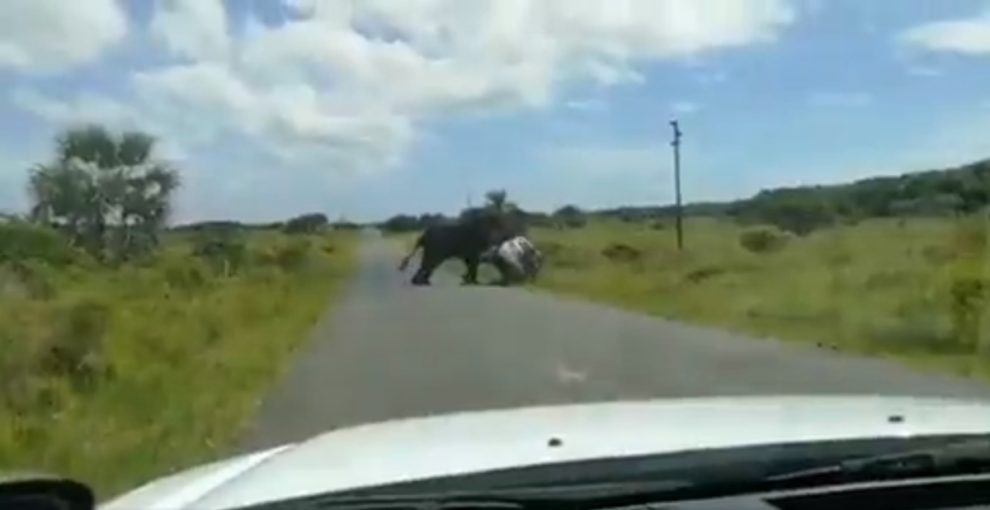 Viral video shows a family in South Africa’s iSimangaliso Wetland Park had a close encounter with wildlife after an angry elephant flips over their car while they were inside.

At the weekend, an elephant’s strength was on display when it flipped over a car with a family inside it at the iSimangaliso Wetland Park in KwaZulu-Natal, South Africa.

The iSimangaliso Wetland Park said its officials were notified of an elephant incident on the park’s Eastern Shores on the road to Cape Vidal around midday on Sunday.

“A vehicle travelling to Cape Vidal with two adults and two children inside, came into contact with an elephant.”

“The elephant reportedly pushed the vehicle with its tusks, and rolled the car on its side and its roof, with the passengers still inside,” the park said in a statement.

Officials from the park responded to the incident and rescued the family, with no serious injuries suffered by the passengers.

“Although such incidents are not a common occurrence in iSimangaliso, we wish to caution our visitors to always remain vigilant and keep to a distance of at least 50 metres from wildlife, particularly the big five. Human-wildlife conflicts can and do happen since these animals are wild, and roaming freely in the park. We are grateful that no life was lost during this incident,” the statement read.

Following a Park management investigation into the incident, no further action will be taken against the elephant in question.

The iSimangaliso Wetland Park is a World Heritage Site and South Africa’s third-largest protected area, stretching 280 kilometres from the Mozambican border in the north to Mapelane in the south of the Lake St. Lucia estuary.

U.S. Promises $1.2 Billion To Feed Horn Of Africa, Urges Others To Help

Africa sees 63% rise in diseases spread from animals to humans in decade: WHO