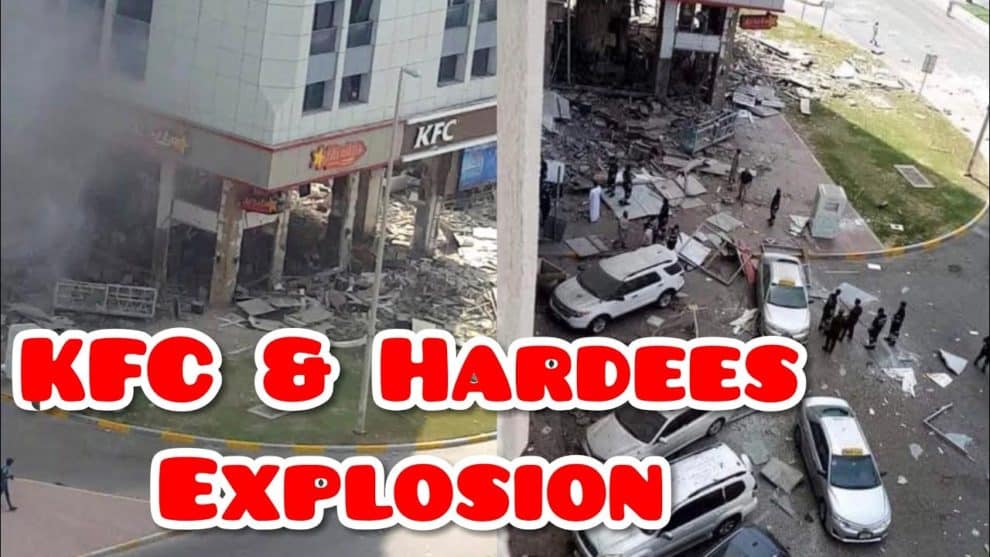 A video surfacing from Abu Dhabi shows restaurants engulfed in fumes and fire followed by a big explosion. The Abu Dhabi Police told the press that the blast occurred on food outlets located on the Rashid bin Saeed Street. The Rapid Intervention Teams of the Emergency and Public Safety Directorate of Abu Dhabi Police responded promptly to the emergency situation. Later reports confirmed KFC and Hardees were the food chains that the explosion originated from.

Immediately after receiving the report, the Command and Control Centre in Abu Dhabi rushed the Rapid Intervention Teams to the spot. The team was able to safely evacuate the residents from the buildings. Some people in the close vicinity of the explosion sustained minor to medium injuries, these people were immediately transferred to a nearby hospital. The area was cordoned off to ensure public safety.

The scale of the explosion

Photos posted on social media show extensive damage to the KFC and Hardees restaurant outlets. The Abu Dhabi government media officer told the press that the explosion had claimed the lives of two people who were in the close vicinity at the time. The Abu Dhabi Government Media Office tweeted the following statement, “Unfortunately, two victims lost their lives – one near the site of the incident, and a second passer-by who was hit by debris.”

The street where the explosion took place is an important one, it is also known as the main road to the airport. Since the road leads directly to the airport, top aides to the United States President Donald Trump and Israeli Prime Minister Benjamin Netanyahu were expected to land here on Monday evening.

Negligence on the part of KFC and Hardees restaurants

Reports reveal that the blast of fire was a result of gas leakage or poor fitting of the gas container at either KFC or Hardees restaurants. The police is currently evaluating the building for any hints of detecting the source of the explosion so adequate steps can be taken. The videos and images surfacing on social media reveal that the explosion occurred at a large scale. Locals report that they heard an ear-splitting explosion which followed the sound of debris falling on the road. The sound of an explosion was heard from more than 1 km away.

Abu Dhabi laws insist strict adherence to health and safety regulations in restaurants and public markets to ensure public safety and prevent incidents like these from happening. Once the source of the explosion has been clearly identified by experts, it is likely that either KFC or Hardees restaurant outlets will be fined for negligence to ensure a safe place for the public. All possible steps should be taken to prevent such circumstances that put hundreds of lives on stake. The authorities have extended their condolences to all those affected by the incident.

Video shows the aftermath of the explosion in Abu Dhabi