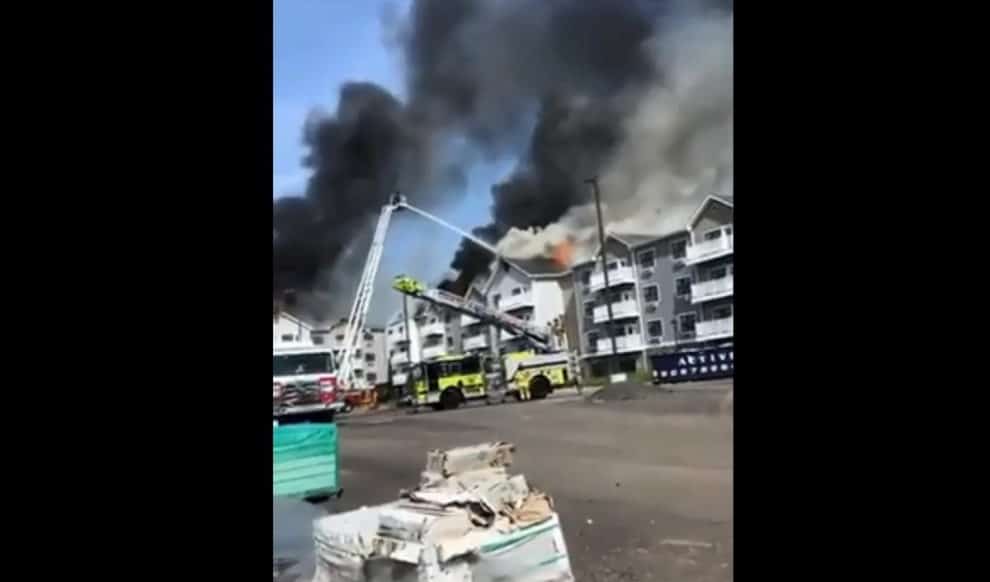 A video showing a massive fire at Somerville Apartments in New Jersey has surfaced on social media.

According to reports, this fire broke at a construction project initiated to construct luxury buildings in Somerville. The locals have reported that the fire broke out around 9:30 am this morning at the Somerville Parch complex. The complex was currently under construction and thankfully was not occupied by inhabitants yet. The complex is located at the James Street.

As soon as the locals spotted the fire, firefighters were called who arrived at the scene quickly. Currently, a heavy crew is pouring water to subdue the massive flames arising from the apartments.

Video of the fire at Apartments in Somerville, New Jersey

Dozens of firefighters responded to the call and firefighters from different counties were stationed to curb the flames. Since the apartments were still under construction, no injuries have been reported. A completed apartment in the same complex of Somerville towards the west side was vacated as a precaution.

The cause of fire has not yet been disclosed. The owners of apartment complex are happy that no one sustained any injuries. The intensity of the fire was so high that the fire fighters had to operate from outside. Firefighters were seen climbing on ladders to spray water on the apartment building in hopes of killing the fire.

Traffic in the region has been maneuvered towards the East Main Street by Romert Wood Johnson University Hospital Somerset since the fumes and flames are likely to disturb the traffic as well firefighters working hard to control the fire. No traffic also makes it easier for the firefighters to stretch lines to hydrants.

The fire has attracted considerable attention from press as two television news helicopters were seen hovering over the Somerville apartments to cover the fire. The apartment phase that caught fire opened on James Street just a few months ago.