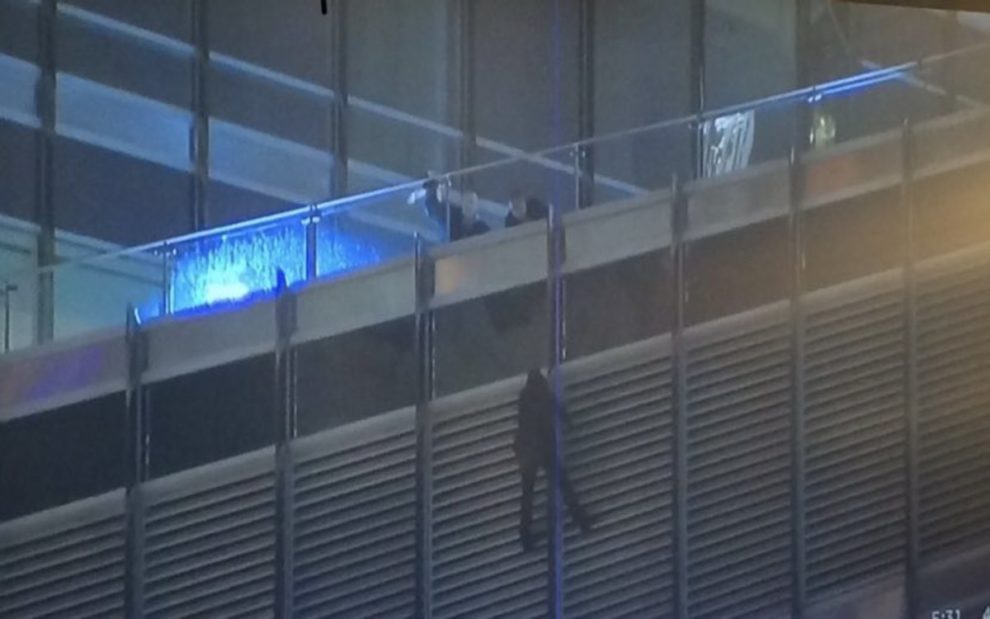 After an ordeal of 13 hours, the man hanging on Trump Tower has finally been apprehended. We exclusively reported on the events last night on Twitter, which can be accessed here.  The news when viral when a video surfaced on social media, showing a man climbing from rope to the Trump Tower building. Emergency services were alerted as soon as this absurd behavior was noted. In the hours that followed, the man refused to move until he was allowed to speak directly with President Donald Trump.

A man dangling on Trump Tower apprehended after 13 hours.

The man repeatedly threatened to cut the rope he was dangling from when the authorities approached near. The scene attracted Police along with CPD’s SWAT Team. Later reports indicated that the man seemed to be in his 20s. His stunt gathered a crowd of onlookers near Trump Tower.

Here another video clip (Shorter
one) of the message from Asian man claims to be from #BLM group, hanging at Trump Tower. pic.twitter.com/UcrQ0ILUQy

“I don’t want to die. If someone will try to pull this rope, I will jump and die,” the unknown man shouted, panning the camera down for a view of the Chicago River from Trump Tower.

In order to handle the situation, Police were forced to block off traffic on Upper Wacker near Trump Tower. Upper Wacker overlooks the Chicago River at 401 N. Wabash Ave. A huge crowd of onlookers had gathered near the tower to witness the man’s stunt. Many people also wondered if this incident was part of a stunt for the upcoming Batman movie. Onlookers felt that the man might have been impressed by the shooting for the upcoming Batman movie which is being shot in the city recently.

The man refused to climb down and the situation extended to Monday morning. This compelled CTA to announce reroutes for the paths taken by southbound 6, 134, 135, 136 and 146 bus routes. These routes were changed due to police activity at Wacker and Wabash near Trump Tower.

The man said he is a member of “Black Lives Matter”

At approximately 1:36 a.m on Monday, Ahern, the police spokesman, tweeted the following “every effort is being made to bring a positive conclusion to this situation” after hours of negotiations. At around 6:31 a.m., he tweeted again that authorities were still continuing their efforts to safely get the man down. Just before 7 a.m., Ahern tweeted that the situation was “resolved peacefully by negotiators” and the suspect had been taken in custody without any reported injuries.

While dangling from the Trump Tower, the unknown man broadcasted his stunt on Facebook live where he also mentioned that he is a member of the “Black Lives Matter” movement. In the live broadcast, he said, “I am member of Black Lives Matter and I want to talk with Mr. Trump before the election. I don’t want to die. If someone will try to pull this rope… I will jump and die. I have a knife. If someone will try to pull [the rope] I will cut it and probably die — but I don’t want to die.”

First video from the scene

Check the whole thread under this video for full coverage on it: