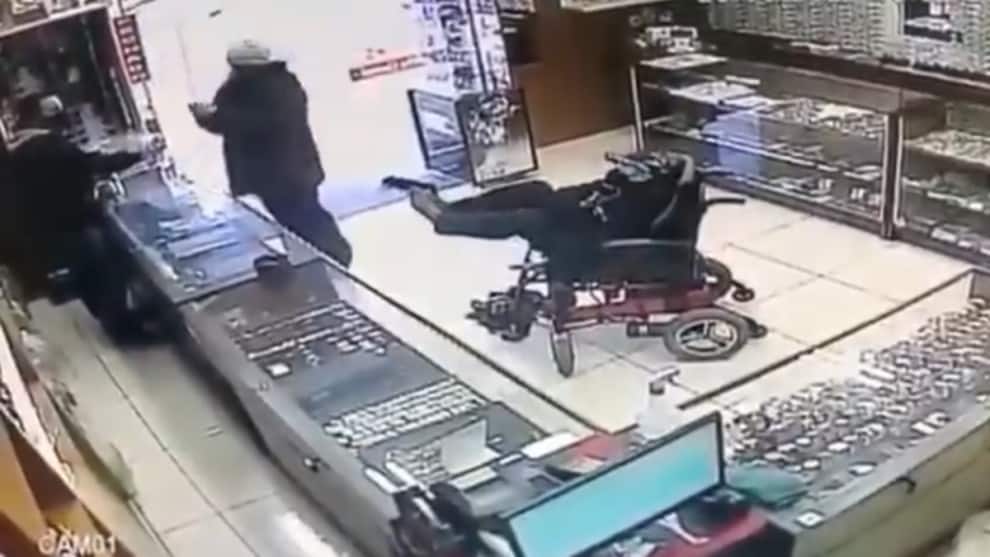 A couple of days back, an odd video captured the moment when a 19-year-old man in a wheelchair attempted robbery at a jewelry store in Canela, Brazil. The amusing part of the video happened when the disabled robber held a cashier at gunpoint, using his feet to clutch the weapon.

According to a video, a young man in a wheelchair was captured attempting a robbery in Brazil. According to reports, the teen with cerebral palsy was in the jewelry store for more than ten minutes, before placing a note on the counter of the store, with his feet.

The note, directed to the cashier simply instructed him to stay calm and pass over the cash. Here’s what the note says after translating to English:

”Hand over everything. Don’t raise attention.’

However, the store cashier must have interpreted the note as a joke from a criminal man in a wheelchair.

Furthermore, one of the store surveillance cameras was able to capture the criminal man in his wheelchair, before clutching a gun with his feet and pointing it towards the counter. According to the video footage, a customer walked away unbothered by the incident, while the store employee was able to confront the robber.

Fortunately, the armed robbery in Canela, Brazil wasn’t successful, as reports claim that military police nearby were able to save the day. Here’s a brief of what the translated report says below:

“The military police, who were nearby, quickly arrived at the scene and approached the individual. The PMs found the weapon used in the crime on the floor and found it to be a simulated revolver. The young man still had a knife wrapped around his wheelchair.”

Who Is The Criminal Man In The Wheelchair?

According to research, the name of the man in the wheelchair was identified and traced to his account on Facebook.

The young man who attempted the robbery in Brazil goes by the name, Olavo Machado De Oliveira. The young man has cerebral palsy, and cannot move his upper limbs. That’s the reason why he’s using a wheelchair. According to his photos on Facebook, it’s clear that the disabled teen has aspirations to become a gangster.

The military police we’re able to confirm that Oliveira, the man in the wheelchair, has no criminal record. However, he has been taken to the Canela Police Station, in Brazil for attempted robbery.