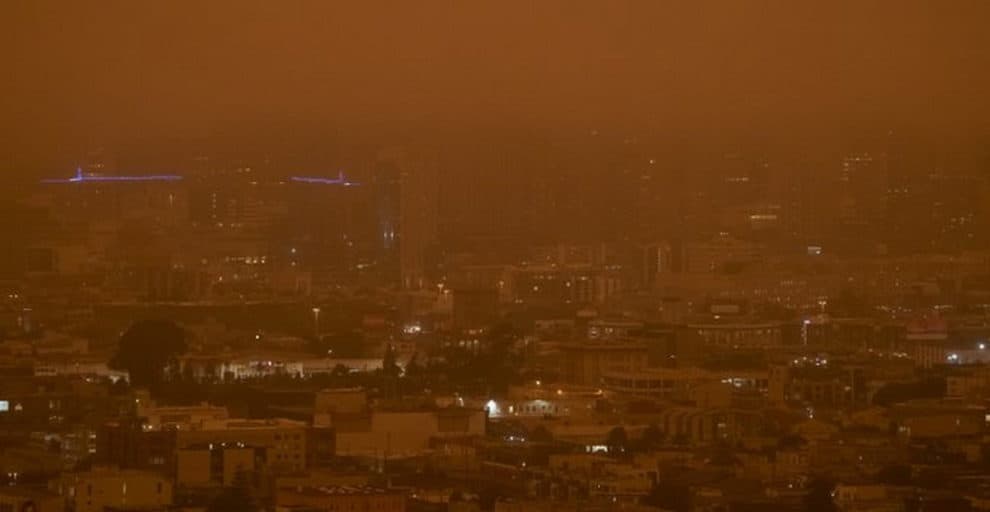 Another ghastly consequence of climate change has made itself visible through the smokey orange color of Bay Area sky. On Wednesday morning, residents noted that the sky above Bay Area looked apocalyptic, the deep orange hues made it seem like the sky was on fire. This was confusing because the air quality in San Francisco, the Peninsula, South Bay, North Bay and much of the East Bay is moderately healthy. It was later found out that the Bay Area sky reflected orange hues due to wildfire smoke in the nearby areas.

On Tuesday, the sky appeared to be heavy with thick smoke. The wind blew the smoke from the August Complex Fire near Mendocino National Forest. The high winds were successful in holding the smoke at a high altitude, this was able to prevent the smoke from settling near to the land. However, the winds moved on Wednesday morning, bringing with them ash and smoke from the increasingly growing Bear fire near Chico, down over the Bay Area.

Nike Nicco, a News Meteorologist from ABC7 explained that the marine layer is trying its best to protect residents of Bay Area from the smoke and ash. He says, “The marine layer is a stable area of air that does not rise, and so we’re continually pumping in cleaner air from over the ocean.” This explains why the sky appears to be smokey and dark, yet the residents cannot smell any hints of smoke or ash.  He further stated, “The Bear Fire exploded overnight and it’s pumping lots more ash into the air, so we have ash raining into our clean air this morning.”

Pictures surfacing on social media from Bay Area show deep blood-orange colored hues, the sky looks dramatic. It almost feels like the pictures are still frames from an apocalyptic movie. Nicco explains that the residents will likely be able to smell the smoke soon, as the Bear Fire does not seem to be subduing any time soon. Residents of the Bay Area are advised to keep a check on Air Quality Index regularly throughout the day. Residents should also shut their windows and take all necessary precautions when stepping out.

UCSF professor Dr. John Balmes says, “People should be sheltering in place as much as possible. Stay home with windows closed, ventilation turned to recirculate, and if possible, have a clean air room with a HEPA air purifying appliance.”

The smoke accumulated in the sky can especially be dangerous for people who already suffer from respiratory issues. The air quality turns bad as soon as people are able to smell the smoke from ash-laden clouds. People should take increased precautions as soon as they are able to smell the smoke in the air. Experts suggest that this poor quality of air is likely to continue till Friday.

It's currently around 10am in San Francisco and this is the view (@rajmathai) pic.twitter.com/fTza2yOHEl

Orange skies in #SanFrancisco this morning. Tune into @CBSNBayArea for live pictures from all over the #BayArea #KPIX pic.twitter.com/yoigvYQFnc

Curious Kids: Why do we see the ‘sky’ during the day, but the galaxy at night?