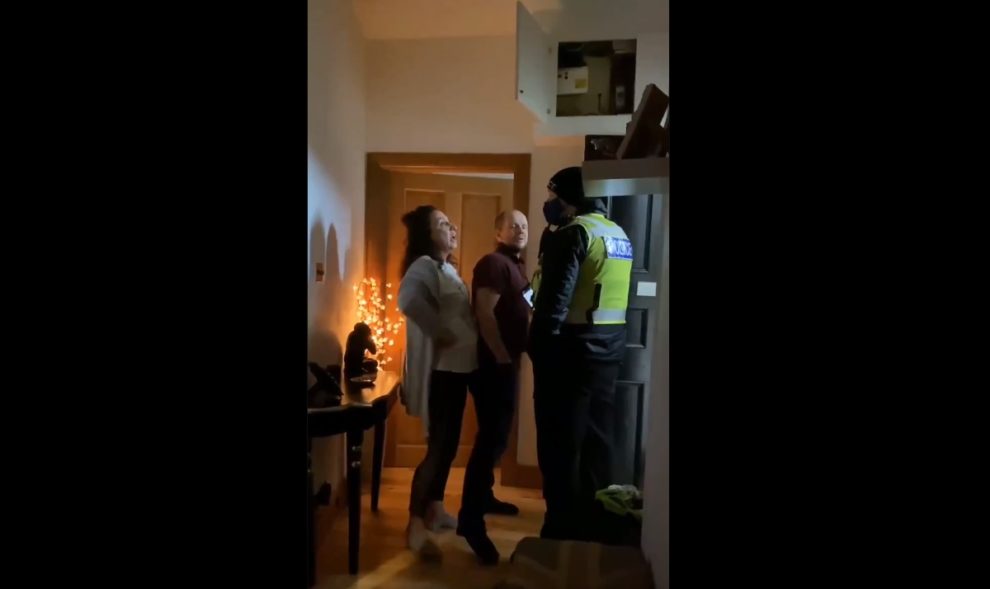 A viral video posted on social media shows Scottish police officers in Aberdeen, Scotland breaks into a home to check if the family living in the house is complying with the COVID-19 rules.

The woman in the house said, ‘My house. That is bullying. This is my house. Get out of my house. I did not ask you in here.’

According to Scottish police officers, they received a complaint from someone in the public about the breach of COVID-19 rules in the house. One of the officers reportedly told the members in the house, he is there because police suspect there are other people in their home.

‘We received a complaint from a member of the public regarding a breach of coronavirus regulations at a property in Aberdeen, around 11.20pm on Wednesday, 6 January, 2021.’ A police spokesperson said.

According to the viral video, the family told the police to leave the house. However, officers objected and enter the house to arrest the family members.

Under new COVID-19 rules, the police are legally allowed to search or enter homes in the UK. The powers granted under the Coronavirus Act enable officers to fulfil their duty to uphold the law and keep the public safe, according to Police Scotland.

Gatherings are prohibited in the UK to relieve pressure on NHS as the number of COVID-19 cases continue to increase.

The source of the video is Gabbie Burnett, daughter of Julie Burnett. She posted the video yesterday with a long message in the description of the footage explaining what really happened. According to Julie Burnett, there was no one in the house except her family.

I’ve had the worst week of my life, I tried to kill myself, I’m really really not in a good place right now, I went to my bed with my little brother(who is 9) to try sleep as it’s so hard for me to sleep right now because all I think about is the world ending and dying I’ve been given anxiety tablets and sleeping tablets, I just got into bed had my head down for 10 mins then I heard a loud bang at the door, the police had apparently had a complaint that there is people in my mums house, the video shows the proof there was no one in my house that shouldn’t be and also my family and I have done absolutely nothing wrong but stand up for our selves and used out human rights, this video shows what happens it’s absolutely awful and I am so disappointed in police Scotland it’s absolutely awful what they have done to me.

According to Scottish Police, two women, aged 18 and 48, and a 43-year-old man in Aberdeen were charged in connection with assaulting police officers and abusive conduct.

Videos of the incident

Users on social media criticized the actions of the officers of the Scotland Police. Here are some of the comments we saw on Twitter:

A columnist wrote, “This is going way too far. It’s distressing, frightening and wrong on every level. I would like to know the context. Anyone know this family?”

A London Assembly Member, David Kurten said, “Just following orders: Police in Scotland raid and brutalise an innocent family because someone said they had friends around. This is tyranny.”

“This is truly disturbing. @NicolaSturgeon is taking her barbarism out on the people of #Scotland. The direct result of voting for primitive parties who’ll enact primitive policies. Scottish Police break into family’s home arresting parents in front of their kids for nothing.” a social media user wrote on Twitter.

Full video of the incident

US, UK warns of attack on Kabul Serena Hotel, ask citizens to leave hotel and nearby area immediately

New tensions erupt between UK and France over fishing permits