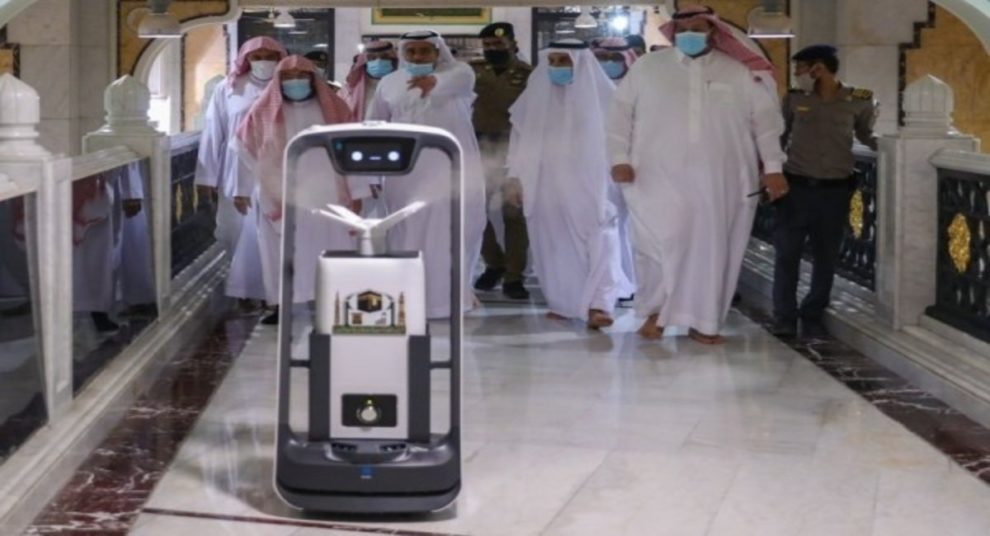 Reports surfacing from Saudia Arabia reveal that Sheikh Abdul Rahman Al-Sudais, the Head of the Presidency for the Affairs of the Two Holy Mosques has launched a smart robot. This smart robot will be utilized for sterilizing the Haram in Makkah, this invention came about in the wake of the Covid-19 crisis that made sterilization and environmental protection a priority.  Sheikh Al-Sudais has been praised for this innovation that will ensure that the spread of the virus is considerably curbed.

The pilgrims reached the Haram in Makkah on 4th October, this was after 6 months of no pilgrims being allowed at Haram in the wake of Covid-19. As part of a 3-phase plan to safely resume the pilgrimage, the Kingdom of Saudia Arabia has allowed back only pilgrims from the country to perform Umrah to avoid a large crowd. Saudi Arabia has further regulated the pilgrimage by limiting the number of pilgrims to 6000 per day.

Moreover, stringent measures are being employed to contain the spread of the virus. The invention of the Smart Robot for sterilization is an effective part of these measures.

Saudi Gazette stated that the robot will work with a high-resolution Simultaneous Localization and Mapping (SLAM) automation system to sterilize the Haram in Makkah. Sheikh Al-Sudais told the press that the launch of the high-precision robot will make significant improvements to the sterilization process at the Haram. This innovative technology will affectively kill viruses and other germs in the midst of Haram.

Moreover, the smart robot works from five to eight hours a day without any form of human intervention. The smart robot is also equipped with a camera that has a  high-quality radar installed for mapping. This can assist the smart robot in effectively eliminating bacteria in a closed area of 600 square meters at any given time.

Video of robot sterilizing the Haram at Makkah