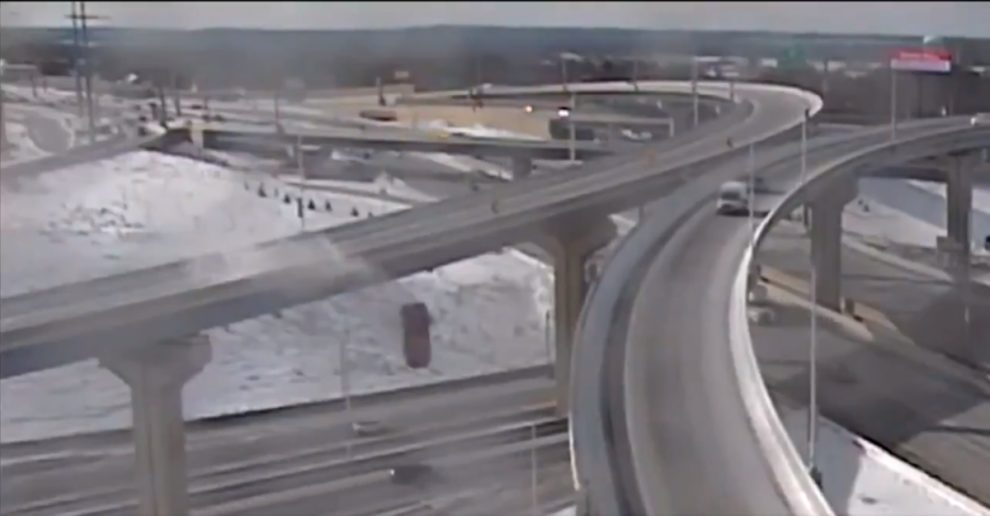 A driver survived a 70-foot plunge off of a roadway on Saturday as a pickup truck falls off a highway in Wisconsin.

The incident happened around 9:49 a.m. Saturday, according to the Milwaukee County Sheriff’s Office, which responded to a one-vehicle, personal injury crash on westbound I-94 just east of Interstate 41 in the Zoo Interchange in Milwaukee. They found the red truck upright in the right lane of westbound I-94, the sheriff’s office said.

Two bystanders were on the spot providing aid to the driver. The driver was conscious, did not show signs of impairment, and had no serious injuries. The Milwaukee Fire Department transported the driver to a local hospital.

The truck hit a snowbank which was stacked up on the right shoulder of the road. An initial investigation reported that the driver lost control of the vehicle while traveling up a snowbank and skidded over the ramp barrier wall.

The Wisconsin Department of Transportation captured the dramatic video the moment a truck falls off a highway and plunged 70 feet onto a Wisconsin interstate. Milwaukee County said it is working as quickly as possible to clear snow from the side of highways in order to avoid such crashes. A drive through the Zoo Interchange shows the county removed some of that snowbank on the side of the ramp while other freeway areas remain lined with snow.

Many incidents have occurred across the Midwest where snow, sub-zero temperatures, and freezing rain have caused dangerous, icy roadway conditions.

‘The biggest risk with that is the melting and the freezing creates sort of a ramp, a natural ramp,’ Milwaukee County’s Director of Highways and Maintenance Eddie Santiago said. ‘The snow is as hard as concrete so a lot of our equipment is out there, literally chipping away at the snow and ice to get that removed,’

More than 41 million people remain under winter weather alerts that extend from Oklahoma to Cape Cod, according to CNN Meteorologist Michael Guy.

As the truck convoy arrives, the Pentagon extends National Guard support in DC