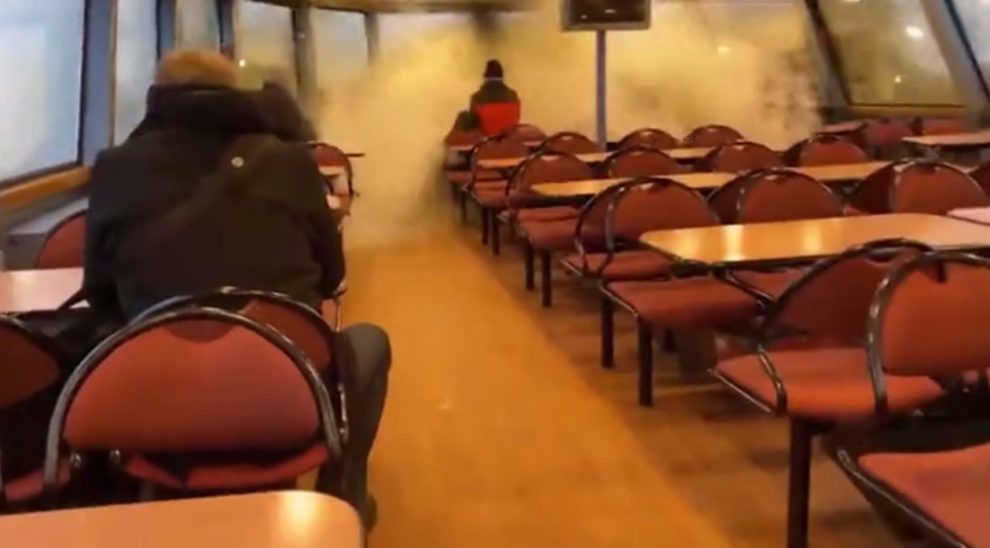 A huge water wave smashed through the front windows of a ferry in Hamburg, Germany knocking passengers off their seats.

Video: Water crashes through the windows of Ferry in Germany

WATCH: Terrifying moment – Water crashed through the front windows of a ferry in Hamburg, Germany pic.twitter.com/RqDYf8ugNK

The terrifying moment the ferry was hit by a wave during a storm is captured on video. It caused a panic as people grabbed their belongings and fled as water flooded the seating area. The water entered the passenger compartment through the shattered windows caused by the wave’s pressure.

Despite the fact that the force of the wave knocked some passengers backwards, no one was seriously injured, according to media reports. There were only a few people on board, and many of them were seated near the back, giving them enough time to flee.

Officials are now looking into why the windows collapsed. The incident occurred during Storm Ylenia, which brought winds of up to 95 mph to northern Germany.

Residents have been advised to remain indoors and away from buildings, scaffoldings, and power lines.

Storm Ylenia has knocked out power to thousands of homes, forced schools to close, and caused travel chaos, with trains and flights cancelled in many parts of the country.