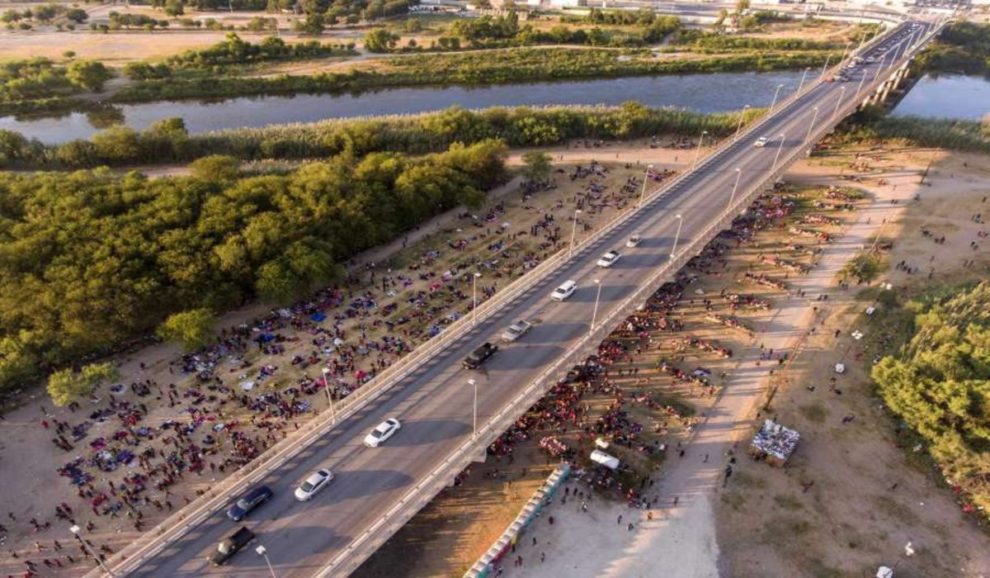 Over 10,000 illegal immigrants, the majority of whom are from Haiti, are waiting for asylum under the Del Rio International Bridge after crossing into the United States via the Rio Grande this week, with more expected in the coming days, according to local officials, Reuters reported Friday.

Governor Greg Abbott announced that Texas will close six points of entry along the US-Mexico border due to a massive influx of migrants.

“I have directed the Department of Public Safety and the Texas National Guard to surge personnel and vehicles to close six points of entry along the southern border to prevent these caravans from overrunning our state,” Abbott said in a statement, according to Xinhua.

“The border crisis is so dire that the US Customs and Border Protection is requesting our help as their agents are overwhelmed by the chaos,” the Governor said, slamming President Joe Biden’s administration for “the sheer negligence” to secure the border.

Marsha Espinosa, spokesperson for the Department of Homeland Security, told CNN on Thursday that it “is not seeking assistance from the State of Texas to shut down ports of entry”.

“It would be a violation of federal law for the Texas National Guard to unilaterally do so,” the spokesperson said.

On Thursday, local media reported that in Del Rio, a city of 35,000 people in southwestern Texas, thousands of migrants, mostly from Haiti, were huddled in filth in a temporary staging area beneath the Del Rio International Bridge, waiting to turn themselves in to the US Border Patrol and seek asylum.

JUST IN: Large number of migrants gathered at international bridge in Del Rio, Texas, waiting to be processed to enter the United States.pic.twitter.com/SNdJsE824V

“Six, seven days ago, Del Rio saw 400 migrants sitting, underneath the bridge, the (point of entry) in downtown Del Rio, there’s about 6,000 sitting there right now and more are coming,” Victor Escalon, regional director of the Texas Department of Public Safety, said earlier on Thursday.

Due to the overwhelming number of migrants in Del Rio, all entry points will be closed, he said.

Del Rio Mayor Bruno Lozano said on Thursday that there were about 9,000 “really anxious and stressed” migrants waiting to be processed under the bridge, and he asked the federal government to help the city.

According to The New York Times, authorities and city officials expect thousands more to cross the ankle-deep river between Mexico and Del Rio in the coming days (NYT).

According to the US Border Patrol, more agents will be sent to the region “to immediately address the current level of migrant encounters and to facilitate a safe, humane, and orderly process.” as stated in the report.

According to the New York Times, the scene of dense crowds sleeping on dirt or milling about amid deteriorating sanitation drew condemnation from local officials.

According to the city mayor, there was little access to clean water and food in the temporary camp under the bridge, and there were only a few portable toilets.

A federal judge also barred the Biden administration from turning away migrant families with children under a public health order related to the Covid-19 pandemic on Thursday, effectively ending the administration’s efforts.

Another federal judge in Texas ordered the Biden administration last month to reinstate a border policy implemented during the administration of former President Donald Trump that required migrants to remain in Mexico until their cases were heard in US immigration courts.

Arrests at the US-Mexico border have reportedly remained at their highest level in more than two decades, with more than 208,000 recorded in August alone.