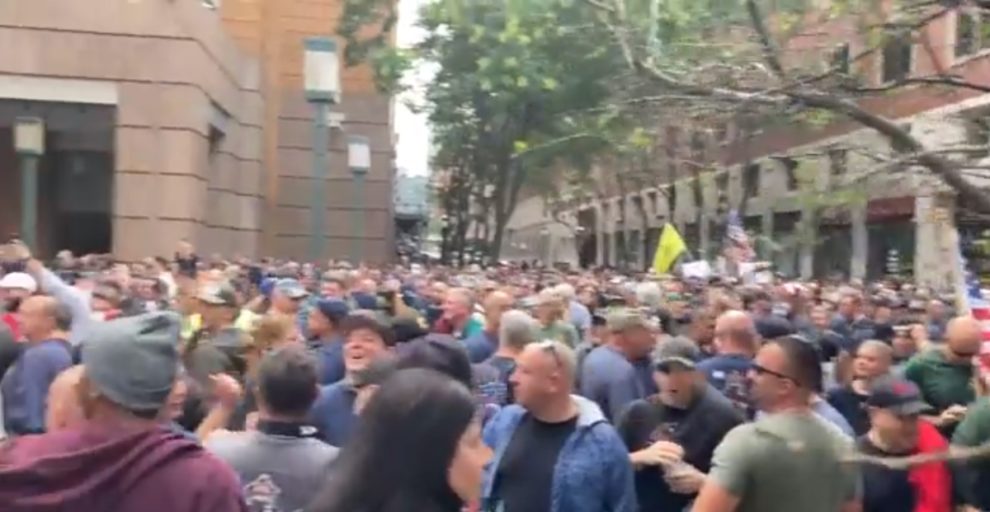 Videos show municipal workers in NYC marched across the Brooklyn Bridge in protest of the COVID vaccine mandate on Monday.

Thousands of city workers could be put on unpaid leaves if they don’t get the shot by Friday. That is Mayor Bill de Blasio’s threat, with vaccination rates at several large city agencies, including the NYPD and the FDNYP, lagging behind the general population.

“It’s time now. If you don’t want to get vaccinated, you’ll be put on unpaid leave. Well, the vast majority of human beings go to work to get paid. And also, I think for a lot of our first responders, there’s a calling. They believe in the work, they care about the work. Those two factors I think are going to cause the vast majority to get vaccinated,” Mayor de Blasio said.

Big turnout at @FDNY HQ by firefighters opposed to @NYCMayor @BilldeBlasio ‘s vaccine mandate for municipal workers, which goes into effect in a week. He’s standing by his order, but these protesters say they’ll force him to send them home when the order takes effect. @PIX11News pic.twitter.com/eIYmmgTzWQ

At the protest against the held by #NYPD #FDNY #NYSD and many other city workers. Definitely a few thousand people at this protest in Brooklyn NY
They chant " HOLD THE LINE "#mondaythoughts #NEWS pic.twitter.com/u9PC6sED6x

Hundreds, many FDNY and NYPD, are about to March across Brooklyn Bridge to protest @NYCMayor vaccine mandate for city workers. Latest on @CBSNewYork pic.twitter.com/wk7GvySTmQ

Hundreds of people including FDNY, EMS, SDNY and NYPD have gathered in Brooklyn to protest the vaccine mandates in NYC pic.twitter.com/PMaY2fKf45