According to the latest development, the long-awaited Android 11 OS is officially out. Guess what, some OEMs have started pushing out the betas and stable updates of the operating system to their eligible smartphones. Not long ago, the Android Developers posted the main features of the Android 11 update on its official Twitter account. Some of them include new conversation bubbles, enhanced 5G support, new controls space, and people-centric conversation notifications. Speaking of the chat bubble feature of Android 11, it’s a new offering that enables users to get back into a conversation, without having to leave the app they are currently using. However, it seems everything isn’t working smoothly with the feature. That’s because some Pixel users, who already switched to the newly released Android 11 OS, are now reporting that it’s not working on the Google Messages app.

Following the recent rollout of Android 11 OS to Google Pixel devices, some users have now taken to various social media platforms, including Twitter and Google Support, to complain about the new chat bubble feature. According to the pixel users, the feature isn’t working on the Google Messages app. Furthermore, looking at the reports so far, it seems the issue is affecting some Pixel devices, including the Pixel 4a, Pixel 3a, Pixel 4XL, and Pixel 2XL. Let’s have a quick look at some of the reports below:

According to @BillyLang12, the Pixel 4a user reported that the new Android 11 chat bubbles feature isn’t working on the default google messages app of his devices. Here’s what the user tweeted about the issue below:

“@madebygoogle, is there a known issue with the chat bubbles not working for the default google messages app on my pixel 4a? Thanks.”

Similarly, another Twitter user, with the username @xPhrostx, also reported that he has tried his possible best to get the chat bubbles feature of Android 11 to work, but all efforts proved abortive.

A Google Pixel 3a user also reported the same issue on Reddit. Here’s a brief of what the Redditor said regarding it below:

“Having the same problem. Everything is turned on and they don’t show up. Updates always have issues. They’ll sort it out eventually.” 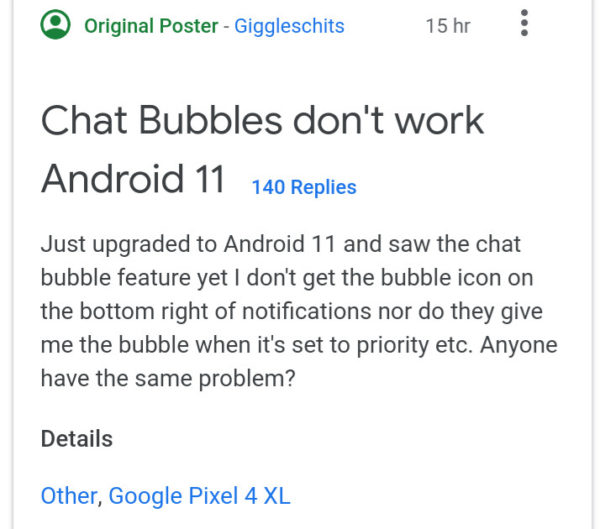 For now, Google hasn’t made any official statement to address the issue of Android 11 Chat Bubbles that is not working on the Google Messages apps. Furthermore, it’s worth noting that the feature is working for some users. As such, it’s still unsure what the real cause of the issue is.

However, since the issue is affecting a lot of pixel users, we’re hopeful that the giant tech company will come up with a fix sooner than later, to address it. We’ll definitely keep an eye on Google for the update. And as soon as we find anything worth sharing, we’ll let you know about it here.