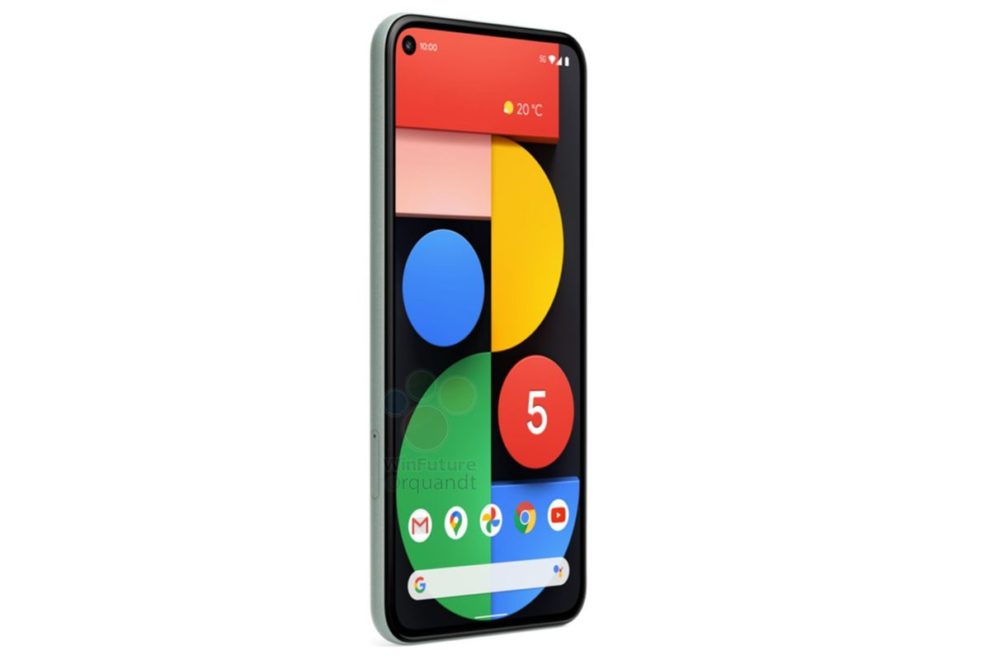 On the launch night held on Wednesday, Google has officially unveiled its latest Android flagship phone Pixel 5 with a price tag of $699. Compared to last year’s Pixel 4, Google is paying less attention to dramatic new technology like the much-hyped Motion Sense gestures on last year’s model. Google is keen on developing unique features that already help set the Pixel apart, like its excellent camera software.

Google has officially tweeted, “A water-resistant phone that creates quite a splash. The new #Pixel5 has 8 GB of RAM and wireless and reverse wireless charging to use with your Pixel Stand or to charge your Pixel Buds on-the-go.”

The core of Pixel 5 has been kept similar to that of Pixel 4. Pixel 5 features the Snapdragon 765G, 128GB of storage, and the same dual rear cameras. RAM and battery capacity are both slightly larger at 8GB and 4,080 mAh, respectively. Rounding out the specs are IP68 waterproofing, and 18W USB-C fast charging.

Pixel 5 has no intricate features that are not immediately apparent. The display is a 6-inch OLED panel with the same Full HD+ resolution, though it’s upgraded to a 90Hz refresh rate. The body is also made out of aluminum instead of plastic. Moreover, Pixel 5 also has the Qi wireless charging, and there is support for reverse wireless charging as well. These are interesting developments.

The much-anticipated pre-orders for the Google Pixel 5 are open as of now. Regular sales will begin on October 15. Pixel 4a 5G is currently showing up with the option to join a waitlist, so we’ll keep an eye out for when those pre-orders become available.

As rumored previously, the latest Pixel is a slightly different device than those manufactured in previous years. Instead of going for the absolute best specs possible, Google is offering a slightly more modest set of specs and a lower price point: as aforementioned the Pixel 5 will start at $699, a $100 cut from Pixel 4’s launch price.

As usual, the star of the show with Pixel 5 is the cameras. The Pixel 5 has two rear cameras: a 12.2-megapixel main camera with a 77-degree field of view and both optical and electronic image stabilization, and a new 16-megapixel ultrawide that shoots at a wider 107 degrees. The front camera, meanwhile, is an 8-megapixel camera, but Google has added the option to take portrait mode shots using its Night Sight mode.

Of course, there are some new software features, too. Google has added a new AI-powered “Portrait Light” mode, which lets you adjust the lighting on portrait mode shots, a “Cinematic Pan” setting for panning shots, and three new stabilization modes for shooting smoother video. And the “Extreme Battery Saver” mode promises to help stretch your battery life to up to 48 hours.

Sept 29 UPDATE: Right before its September 30 launch event, Google has accidentally leaked the Pixel 5 design and price details through its official Twitter handle. Google’s official Japanese Twitter account posted a video showing off the front panel of the smartphone. The post has since been deleted, but not before media outlets grabbed a screenshot.

The tweet also included a link to the Pixel 5 page, but it’s not live yet. The device is going to cost 74,800 yen in Japan. That’s $708. According to the video, its design would be similar to the recently launched Pixel 4A. It would sport a punch-hole in the top-left corner of the screen to accommodate the selfie camera.

It also confirmed that the device would offer 5G connectivity. The tweet said, “Enjoy fast movie downloads and professional-grade photography. 5G experience with the best specs.”

The much-awaited Google Pixel 5 is just around the corner. Google launched the affordable Pixel 4a only a few weeks ago. A steady flow of leaks over the last several weeks has revealed tons of details about the Pixel 5 series.  In this article, we’ll be looking at everything about the upcoming Google Pixel 5, including its release date, price, and specs.

Google is set to hold its ‘Launch Night In’ event on September 30th. The search engine giant is going to announce a bunch of products at the virtual event. We will likely see the Pixel 5 smartphone, the Chromecast, Nest Audio, Pixel 4a 5G, and more at the event. The company has started sending out invites for the upcoming show.

When Google announced the Pixel 4a last month, it indicated that it would release 5G versions of the Pixel 5 in several markets including the US, UK, Canada, France, Ireland, Germany, Australia, Japan, and Taiwan.

If fresh reports are to be believed, the upcoming Google Pixel 5 would have an attractive price tag. Google doesn’t seem interested in selling ridiculously expensive phones. According to Twitter tipster Jon Prosser, the Pixel 5 with 128GB internal storage would cost $700.

It’s in line with an earlier leak from Twitter tipster @NilsAhrDE, who said it would have a starting price of EUR 629 in Germany. The Pixel 5 is going to launch in Mint Green and Just Black shades. By comparison, last year’s Google Pixel 4 started at $799 in the United States.

The lower price tag isn’t impossible considering the Pixel 5 would run a mid-range Snapdragon 765G chipset instead of the premium Snapdragon 865 Plus.

The upcoming Pixel 5 device will be coming with the mid-range processor, Snapdragon 765G. This variant is optimized for faster graphics and gaming, and it offers support for software and hardware tweaks.

It will reportedly offer 128GB of base internal storage and 8GB of RAM. The device would sport a 6-inch OLED display with 2340 x 1080 resolution and 90Hz refresh rate. According to various leaks, the Pixel 5 will pack a 4,000mAh battery, which should easily last a full day of normal usage.

You can take a quick look at the AI benchmark listing for the upcoming Pixel 5 device below, and see what will come on the smartphone:

Looking at the image of the listing, you should notice that the AI benchmark listing also revealed other specs of the upcoming Google Pixel 5 smartphone. The device will come running on Android 11 out of the box, according to the listing.

Talking about its camera specs, the device will likely come with two rear cameras like that of Google Pixel 4. These will include a 12MP main camera sensor and a 16MP wide-angle lens. There would be a 13 MP front camera.

So far, we have seen a few leaks as to how Google Pixel 5 will look like. One of them, published by Front Page Tech showed three potential designs of the upcoming Pixel. According to one of them, the camera design of the upcoming device is a little bit different from the previous ones.

However, the other two are with more conventional square camera blocks. As seen in the image below, one of the three camera lenses has a wide-angle, different from other Pixel versions. Front Page Tech also indicated that the front design of the upcoming device will come with a forehead bezel like that of Pixel 4.

Reputed Twitter tipster Steve H.McFly aka @OnLeaks has shared a new render of the Google Pixel 5, showing off what the device might look like. The square camera module on the back is similar to the Pixel 4. As previous rumors indicated, the upcoming phone features a capacitive fingerprint reader on the back. Google will reportedly ditch the Soli radar chip from the Pixel 5. The capacitive fingerprint sensors are more reliable than in-display fingerprint sensors. 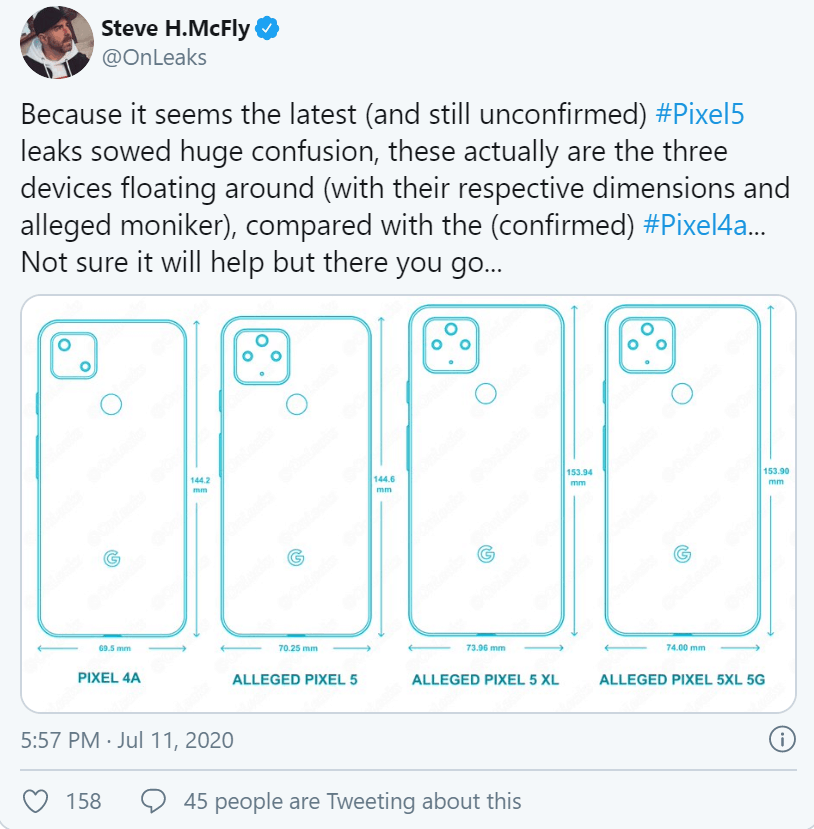 The Pixel 5 features as many as four sensors in the square camera module. But there is no sign of the ultra-wide angle lens. The four sensors appear to be the main lens, a secondary lens, an LED flash, and a microphone. The secondary lens is more likely to be a telephoto one rather than an ultra-wide-angle sensor.

According to the leak, the Pixel 5 will launch in both 5G and 4G versions because several countries still don’t have a 5G infrastructure yet. Of course, the 4G version would be cheaper of the two. The renders have a headphone jack on the top edge of the device.

Looking at the Pixel 4 device, there is so much improvement that we wish to see on the upcoming device. Let’s have a look at everything we want to see below:

No doubt, one of the concerns with the previously release Pixel 4 device is its short battery life. If the device came with a 2,800mAh battery, we can only conclude that it’s far below the standard battery life of Android phones. Although there’s a massive improvement when the Pixel 4 XL came out. It’s still a little bit below the 2020 standard. As such, Google will introduce more excitement on the faces of users if it can improve on the battery life of the upcoming Pixel.

Google introduced the Soli chip with Pixel 4 that supported Motion Sense. The feature allows us to perform various functions with gestures, without having to touch the screen. Motion Sense hasn’t received a lot of praise from consumers. But we badly need an improved version of this feature amid the COVID-19 pandemic. Interacting with the phone via gestures will minimize the chances of us contracting the coronavirus.

This is almost a certainty. The Pixel 5 series would run Android 11 software, which is currently in public beta. It will have a new Device Control menu for managing smart home devices when you press the power button on your phone. Other major features including new permission controls, a media player widget, and messaging improvements.

Google has started rolling out the latest version 7.5 of the Google Camera app to Pixel smartphones. Folks at XDA Developers dug into the code to find evidence of the upcoming flagship. They found that Google has added a bunch of camera modes in version 7.5, though they are still behind the code-names. The new camera modes include Naruto, Lasagna, Catfish, and Catshark. It’s still unclear what these modes would do. The Pixel 5 will have dual cameras.

The article was updated on 29 September 2020 with new information.