Without a doubt, most people love to have all their favorite Disney classics available on Disney+ app to stream. However, one thing that’s unavoidable is that sometimes we are bound to encounter different challenges with streaming services. Recently, a lot of users started complaining that the Disney+ app is temporarily unavailable for their Samsung TV.

Disney+ App Is Temporarily Unavailable: Here Are Some Users Complaints

In case you’re using a Samsung TV, you may have experienced that the Disney+ app was temporarily unavailable for you.

However, if you didn’t experience any of such issues on your Samsung TV, here are some of the complaints that other users are facing.

On May 31, a Twitter user @GravXReviews posted that Disney+ app is temporarily unavailable for his Samsung TV set. According to Grav, his kids were able to watch penguin movie, a day before the incident. Have a look at what he said below:

“Are you guys kidding me??
Did Samsung decide to push an update to people who are forced to buy new TVs lol? @disneyplus @SamsungSupport” 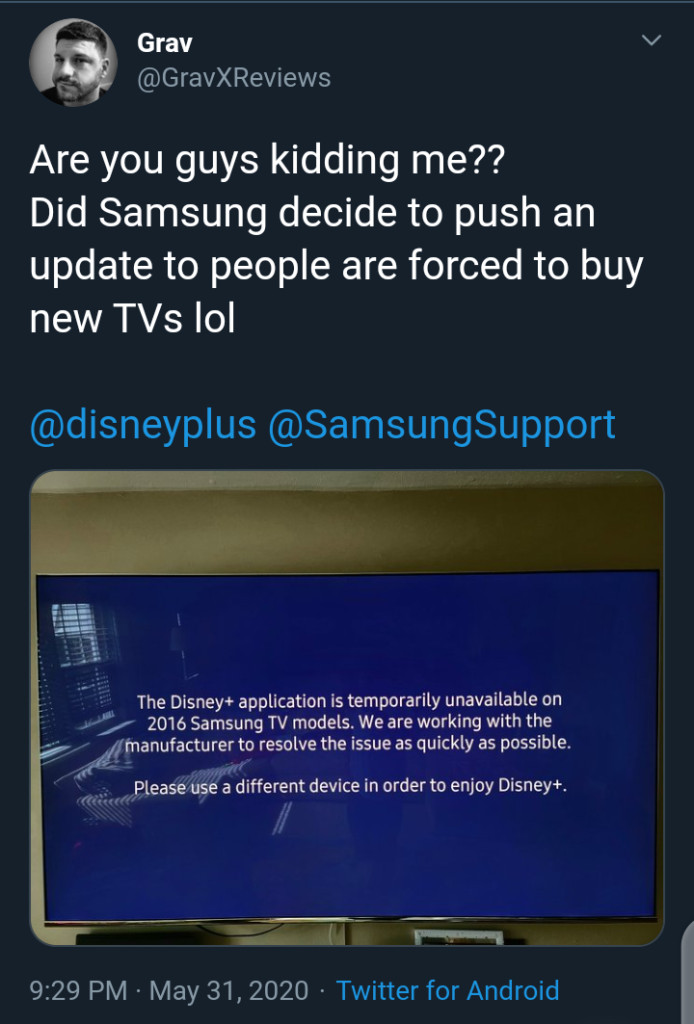 Another user @emilyjslade also complained about experiencing a similar issue with her Samsung Tv. According to her, it’s been up to three days since she started experiencing the error.

“Almost 3 days of this error message and no further information. @disneyplus @SamsungUKCan you please provide an update on this? This is ridiculous.”

Also, a lot of Samsung TV users have made several complaints on different platforms, including Reddit and Samsung Community. Here’s what a Reddit user posted:

“I have a 2016 Samsung TV. When I went to watch Disney+ it said that it’s not compatible with my TV. This makes no sense because I literally watched Disney plus yesterday no problem! What is going on!”

With the look of things, the error, showing that Disney+ app is temporarily unavailable, is only affecting 2016 Samsung TV.

According to replies to most of the complaints, it looks like Disney+ and Samsung are already working a fix for the issue. However, one thing that’s uncertain is how quickly they’ll be able to come up with a fix that matters.

“Hi, Emily! Sorry for the trouble! We’re aware of an issue impacting our app on the 2016 Samsung TV. Our teams are working with the manufacturer on a fix, but in the meantime, you can stream on any of the additional supported devices here: https://displ.us/Device.”

The latest reports say that users are already gaining back access to the Disney+ app on their Samsung TV. Here’s what a user said on Samsung Community.

“After trying for several days, today Disney Plus is working. Unplug your TV, wait for 30+ seconds, plug-in, and Disney Plus worked! Previous attempts didn’t.”

Another user on Reddit, who experienced the same issue, has also confirmed that the error has been fixed for him.

In case you’re still experiencing the error on your Samsung TV, you might have to wait until the fix comes to you.