With a monthly average of over 80 million players worldwide, you’ll certainly agree with me that Mobile Legends is one of the most popular multiplayer online battle arena (MOBA) games out there. This game is popular because of a lot of factors. Agreed, Mobile Legends has the same charm as most of the top platforms you can think of. However, it stands out from others in the sense that it often adds portability and convenience for its players. In addition, the game also receives a lot of updates, most of which come as balance changes, new heroes, and skins. But the game is not without its issues. The latest reports across various social media platforms reveal that Mobile Legends players are experiencing a situation where the game’s ‘downloading resources’ are stuck at 0%, failing to progress.

The rest of this article will shed more light on the new Mobile Legends issue. You’ll get to understand its cause and whether there’s a fix to resolve it.

According to the latest reports, Mobile Legends players are now complaining of an issue, in which the ‘downloading resources’ are stuck at 0%. With this problem, players cannot progress and play the game. Some affected issues even added that they had to wait for hours to see the downloading resources reach completion. Unfortunately, this move couldn’t resolve the problem for them.

Some other players mentioned they downloaded the game’s resources successfully. However, as soon as they restarted the game, it began to re-download the resources all over again. You can check here (1,2,3) to see what affected users are saying about the Mobile Legends issue, where downloading resources is stuck at 0%.

Is there a fix to resolve the issue?

For now, the exact cause of this issue is still unclear. Also, there’s no official fix yet to address the issue. However, there’s a workaround that you can try to resolve the annoying downloading resources issue.

To resolve the issue, Destinymaker suggested you should try following these simple steps: 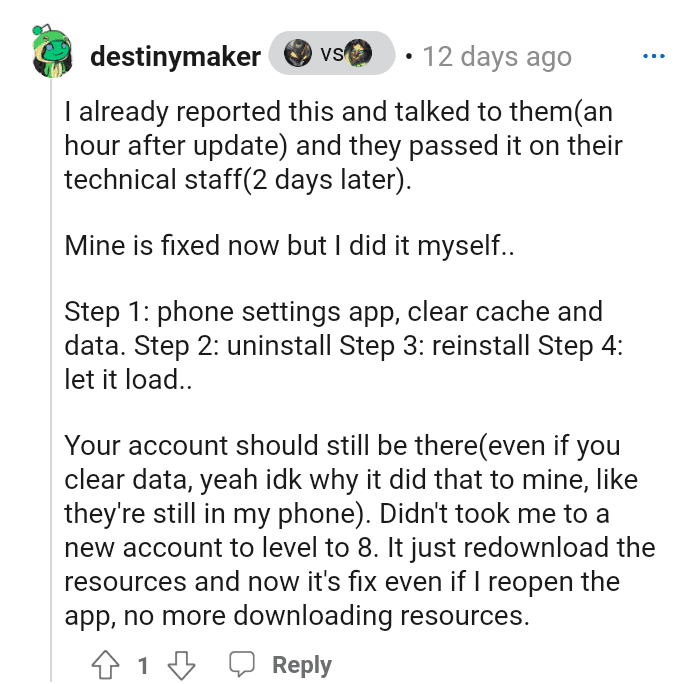 As usual, we’ll continue to monitor the developers of Mobile Legends for you. As soon as we find anything regarding the official fix of the issue, you’ll be the first to know here.