Fortnite, first developed and released by the Epic Games in July 2017, is an online battle royale video game. Today, the game has over 350 million registered players across the world, according to Fiction Horizon. There are many reasons millions of people choose this video game over other battle royale games out there. One of them is because of its flexibility. In case you don’t know, Fortnite receives weekly updates that include new game modes, events, and customizable items. Soon, Epic Games will release the latest season of the Fortnite game. However, many users are now calling on the developers to disable tanks from the Fortnite Season 3 Chapter 3 video game.

Epic Games launched the Fortnite Chapter 3 Season 2 in March 2022. This game came with tons of improvements and features over the previous releases. However, the game also came with a couple of bugs. The exact release date of the upcoming Fortnite Season 3 Chapter 3 is still unknown. However, experts predicted that the game could be available on June 4, 2022. Now, Fortnite players are asking Epic Games to disable tanks when releasing the upcoming Season 3 Chapter 3 game.

According to the concerned players, the inclusion of tanks makes it pretty challenging for them to play the game. You can check below and here (1,2,3,4,5) to get more info about the Fortnite players’ demand to disable tanks from the Season 3 game. 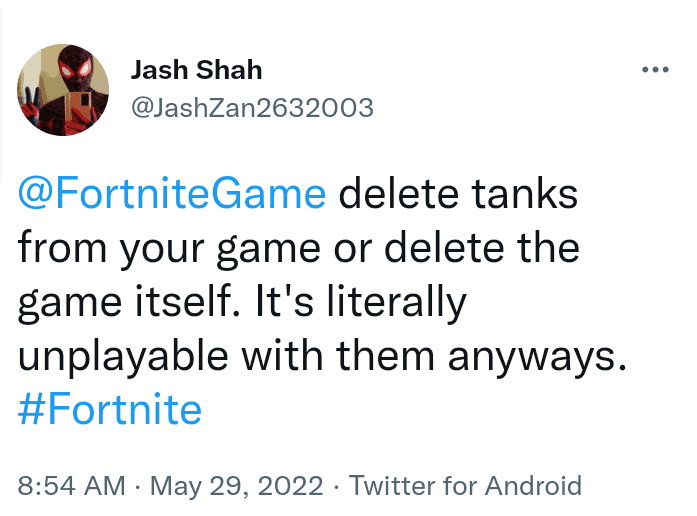 No statement yet from the Fortnite developers

For now, the Fortnite team hasn’t yet come out to comment on the concerned players’ request to disable tanks from the Season 3 game. Also, there’s no official statement yet regarding the release date and features of the upcoming season.

We’ll continue to monitor the developers regarding the matter on the ground. As soon as we find any updates, we’ll let you know about them.