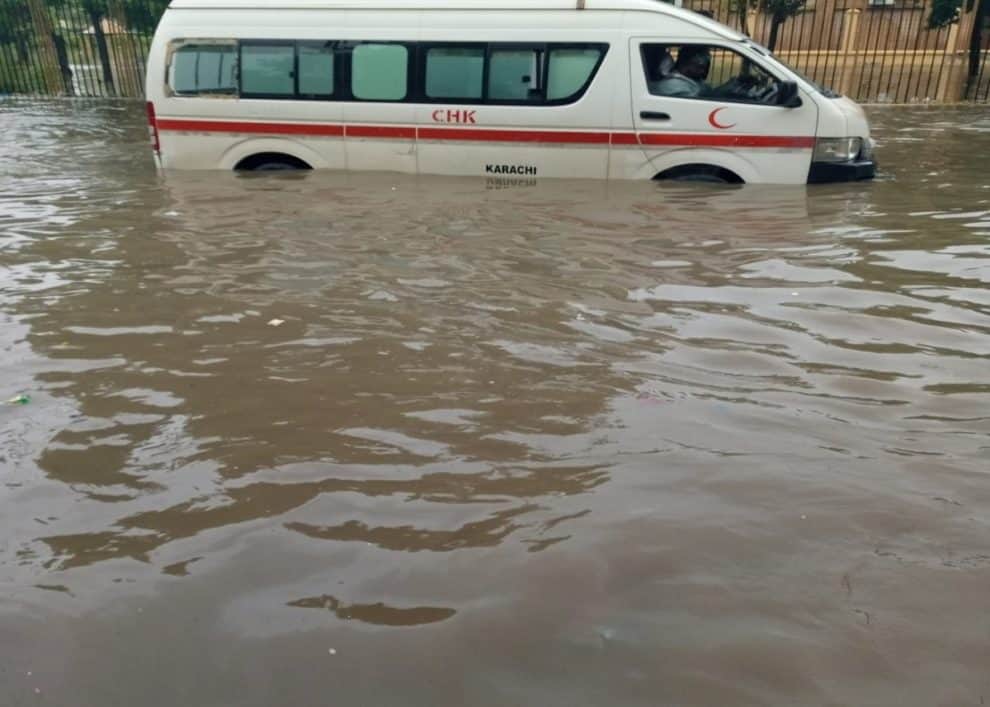 Videos surfacing on social media from Karachi display shocking scenes during and after the record rain. The entire city seems to be drowning, dirty sewage water has accumulated on streets, houses and underpasses. The situation continues to get worse as authorities are unable to reach extremely affected areas due to water blockage. The moon soon rains being experienced in Karachi right now are said to have broken the 70-year record for rainfall. Needless to say, this spell of rain is the worst Karachi has ever experienced.

Although the death toll has not been officially announced, news channels reported that about 90 people have lost their lives. In many areas, faulty electric cables caused electric current in the knee-deep length water standing on the streets.  Sindh Government announced a public holiday on 28th August so that people remain confined to the safety of their homes. Residents of Karachi have expressed anger and disappointment at the lack of planning displayed by the Government of Sindh.

The already difficult situation was made worse by the disruption of cellphone services in the area. People were unable to connect with their loved ones to inquire about their safety, disruption of communication lines spread further panic and anxiety among people. Most parts of the city were plunged in darkness overnight with the main power utility company K-Electric saying the “unprecedented situation” was hampering efforts to restore electricity. Most areas are suffering from a power outage for more than 48 hours now.

Pakistan Army relief extended help and assistance to the victims. Rescue efforts are underway to help flood victims in all areas of Karachi. Special priority is being given to the sick, elderly, children and pregnant women. Heavy rains have suspended all hints of civic life in Karachi as the city continues to drown.

Inter-Services Public Relations (ISPR) has announced that 32 medical camps have been established with the civil administration in various areas including three army mobile hospital in Karachi’s Sarjani Town, Qayyumabad and Saadi Town.

These hospitals and medical camps will cater to all victims of flooding, these camps have also been stocked with emergency kits that cater to injuries caused by electric shocks. Moreover, 56 relief camps have been established in coordination with civil administration to help stranded people. De-watering is being carried out at nine locations to help pump out the accumulated dirty water.

The military’s media wing told the press that a 50 bedded-hospital has been set-up in Surjani area whereas several of medical camps have been set up in Lyari, Garden, Clifton, Kemari, Saddar, Gulberg, Kachi Abadi, Liaqatabad, District Malir, Dist Korangi and district East ( Gulzar-e-Hijri). According to the Rangers spokesperson, the Rangers have constituted separate teams for relief and rescue work to carry out the operation in a faster manner while reserve teams are also present in various areas to deal with any kind of emergency.