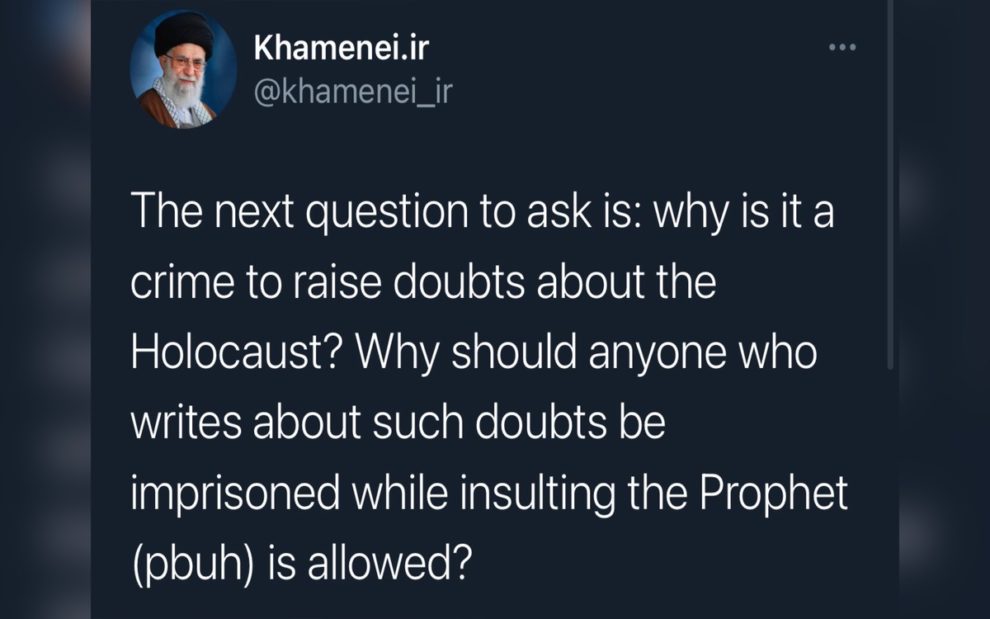 The past week has seen considerable retaliation and protests by the Muslim world against France. The retaliation and movements to ban French products came about when French President Emmanuel Macron supported the depiction of Prophet Muhammad in the form of cartoons under the guise of “freedom of speech.” Subsequently, cartoons of the Prophet were projected on local government buildings in France. Amidst the protests and hatred directed towards France, Ayatollah Khamenei has raised significant questions for the French youth. He questioned the law that labeled speaking of the Holocaust as a crime.

This question was followed by another important one, that has been widely debated on social media as well. Ayatollah Khamenei further posed the following question for the French youth, “why is it a crime to raise doubts about the Holocaust? Why should anyone who writes about such doubts be imprisoned while insulting the Prophet (PBUH) is allowed?”

The French President has sparked backlash and anger from Muslim leaders and scholars by accusing the French Muslims of “separatism”. The French President went ahead to label Islam as “a religion in crisis.” He has also publicly attacked Islamic values in an attempt to defend the publication of derogatory cartoons depicting the Prophet Muhammad. Remarks of such blasphemous nature have been met with anger and disappointment in the Muslim world. The lack of tolerance in this world is concerning. As humans, everyone should have the right to practice their religion freely without incurring labels of a “crisis religion.”

The issue began when a French teacher, Samuel Paty was stabbed on October 16 by Abdullah Anzorov, outside Paris. Samuel Paty was a history teacher who had shown his pupils cartoons of the Prophet in a history lesson pertaining to freedom of speech. Protests and demonstrations sparked across France after Paty’s murder, people demanded justice. Portraits of Samuel Patty were projected on local building governments across French cities as a tribute to him.  The French President maintained, “We do not accept hate speech and [we] defend reasonable debate. We will always be on the side of human dignity and universal values.”

At Paty’s memorial service, the President said that France will “continue this fight for freedom, this fight to defend the Republic of which you have become the face”.As a result of France’s stance on cartoons of the Prophet, the Muslim world began protests to ban French products. Hashtag with the call to ban French products began trending on social media, followed by accusing the French President as the number 1 terrorist in the world.

French parliament to vote on abortion as constitutional right