In Pakistan and several countries in the world, many people have now shifted to shopping online, as it’s easy to use and stress-free. All you need is to make an order online and trust that your goods will be delivered at the right time. Although there are lots of benefits to shopping online, it also comes with its own frustration. One of the problems that online shoppers often face is getting inferior goods. According to the latest report, a video of three kids, who ordered a drone online, has now gone viral across various social media platforms. According to the video, the kids captured a short clip of themselves, while unboxing the package. At first, they were very excited, ready to reveal all the details of the “LV Drone”. However, the kids ended up disappointed after noticing there was no drone in the box and they’ve been scammed by Daraz.

Kids Got Scammed After Receiving Their Drone Package From Daraz

According to the latest report, a young vlogger on YouTube, Ali Taimoor, made an order online via Daraz.pk for a drone. Speaking of the price of the flying system, Ali paid about Rs. 6,550 for it and was able to receive it a couple of days after placing the order.

As a vlogger, Ali together with two other kids, who were excited to receive the package, took a video of the unboxing experience. Unfortunately, the kids were filled with disappointment after realizing there was no drone in the box delivered to them by Daraz. Initially, when the unboxing began, Ali said: “The packaging seems to be quite old. However, let’s open the box and check the product.”

After opening the box, the kids couldn’t see the drone, ordered from Daraz, meaning they were scammed. Instead, the kids only saw that the box was stuffed with pieces of garbage and scraps.

Here’s a brief of what Ali said, after checking the drone box and realizing they were scammed by Daraz below:

“First, we get these pieces of garbage… It’s a fraud, guys! Daraz is a complete fraud!”

You can watch the video of the unboxing below:

The unboxing video of the kids has now raised a lot of comments on Twitter. Many people also contacted Daraz regarding the drone scam incident, involving the kids. Let’s have a quick look at some of them below:

According to @kharroos, the Twitter user said: “nooooo the disappointment on their faces @darazpk IN KO INKA DRONE BHEJO FORAN.”

“Ohh…. please send me your address and I will send you a drone from the UK. My boy is of the same age as these kids and this must be super disappointing for them. I can feel that.”

Furthermore, Daraz has taken to its official Twitter account to address the issue regarding the drone scam incident involving the kids. The store revealed that it had already reached out to the kids regarding a replacement. 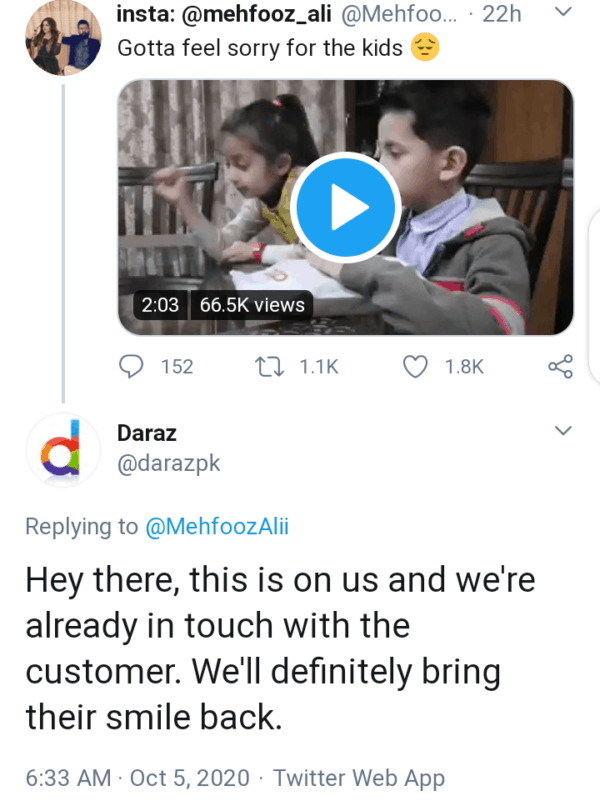 Also, a Twitter user confirmed that the Daraz has refunded the kids their money and replaced the drone.

Here’s what the Twitter user, who goes by the username @ashaqeens, said about that below:

“According to someone I know at Daraz, their money was reimbursed, the product replaced for free & vendor fired.”

A rogue killer drone ‘hunted down’ human target without orders