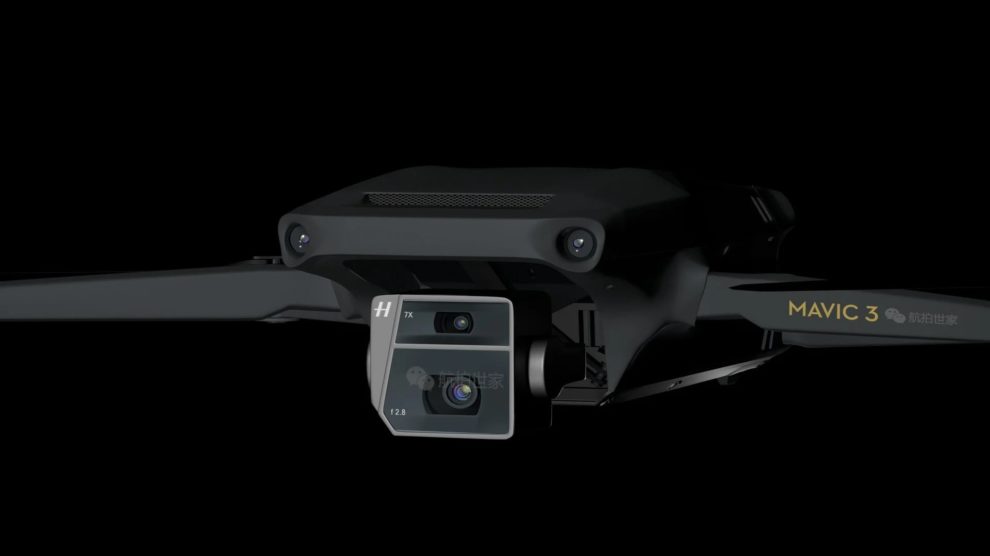 As the rumors regarding the release of the next flagship product from DJI continue to spread in full force, many speculations have been made regarding what the actual release date is going to be. However, If the rumor is anything to go by, we should expect the DJI Mavic 3 to drop by the end of this year. But when exactly should we be expecting it?

An industry insider has suggestively leaked a fair bit of information about the details surrounding the DJI Mavic 3 and there are some juicy bits among them.

An insider claims that DJI has confirmed the launch date of the Mavic 3 which is set to be 20th October 2021. Yes, if there is any truth behind this claim then you can get a hold of the latest, most hyped foldable drone by DJI in less than 2 weeks.

However, last year folks at DroneXL claimed to have learned from a reliable source that DJI is planning to unveil the Mavic 3 on September 26th.

So, without a proper official statement, we would advise you to take this news with a pinch of salt as nothing is concrete yet.

Sources told DroneDJ that the company has decided not to release the DJI Mavic 3 in 2020 because the older Mavic 2 continues to fly off the shelves. It makes little sense for a company to bring a successor when the older model is still selling like hotcakes.

Mavic 3 release Delayed Due to the US Presidential election?

Last year, a high-profile and reliable source was said to have told DroneXL that the DJI Mavic 3 has been delayed “until Trump is gone.” The US President had threatened to ban TikTok if the Chinese company had not reached a deal with Microsoft. Trump has also attacked several other Chinese companies. People speculated that DJI planned to avoid the limelight while the Trump Administration is targeting Chinese companies.

However, the Chinese company negated all these claims and said in a statement, “There have been no plans to launch such a product this summer, and we do most certainly not schedule or reschedule product releases according to political events, in the US or elsewhere in the world.”

With so many “leaks” and rumors surfacing regarding the design of the Mavic 3, it’s about that time where we stop believing in those leaks, unless provided with something a bit more concrete than sketches, renders, and 3D models. And that is what Jasper Ellens, an infamous de-facto celebrity on Twitter due to his rumors and leaks, have provided us with just that.

No more blueprints, sketches, or renders, as according to Jasper Ellens, the Mavic 3 is all locked and loaded, and it is expected to look much better than we could’ve thought. 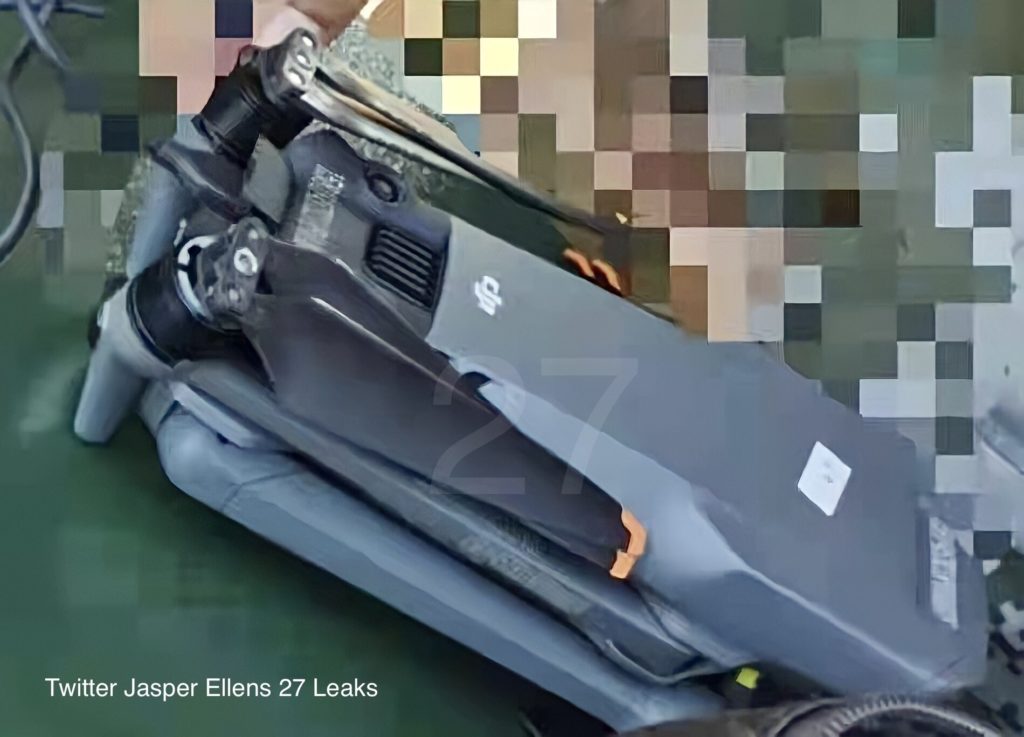 Lo and Behold! The DJI Mavic 3 in all its presumed glory, as the tweet has gathered a lot of attention. 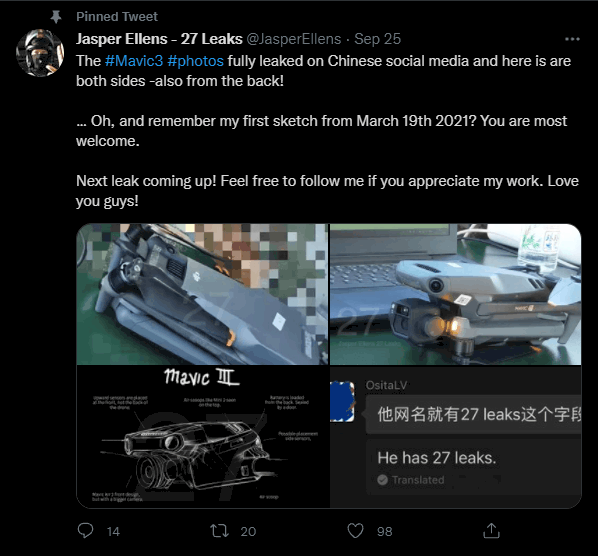 That’s not all we have gotten from the Twitter Drone Guru Jasper Ellens as this time around the pictures wasn’t cutting it for him and he went as far as uploading the entire “supposed” user manual for the DJI Mavic 3 complete with the specification charts and expected price of the product. 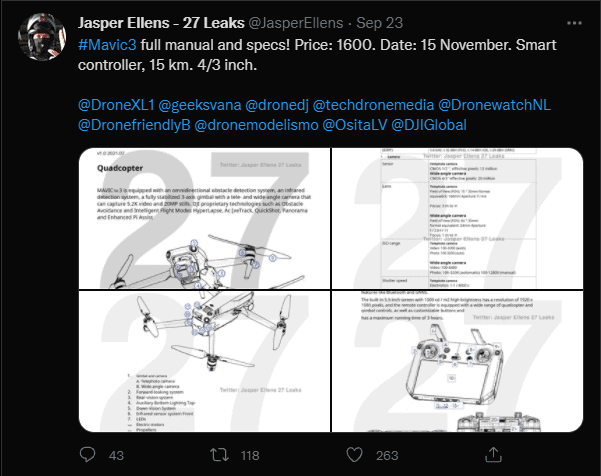 According to the claimed manual of the Mavic 3, the drone comes equipped main 20MP camera along with a 4-3rds sensor with a 24mm f/2.8-f/11 lens and an adjustable aperture. Additionally, the Mavic 3 Cine is expected to boast a 12MP telephoto camera equipped with a 1/2in sensor and a 7x optical zoom based on a 160mm equivalent focal length. It is yet still under argument if all of the models will have these two cameras onboard, however, the leading argument seems to be the development of three different models with different features at different price points.

The new CV5 processor by chipmaker Ambarella can support video at up to 8k 60 fps and 4k 240 fps. This implies that Mavic 3 can have the ability to shoot in 8k to compete with the EVO 2.

But the Mavic 3 has already been under development phases, so DJI must have finalized the chip powering the camera. Moreover, it takes almost a year for products to use the new chips, according to Ambarella’s VP of marketing and business development, Christopher Day. These two factors indicate that we will not be seeing the CV5 chip in the Mavic 3.

DJI bringing its own chip?

The company is reportedly working to create its own self-driving technology. DJI might be coming up with its own processor to avoid relying on other companies to support the features.

Mavic 3 to get a LiDAR scanner?

Apple’s iPad Pro and the latest iPhone sports a LiDAR (light detection and ranging) scanner. Twitter tipster OsitaLV recently shared a hand drawing of what looks like a DJI Mavic 3. It sports a LiDAR scanner at the bottom. There is no official confirmation on this. But DJI could add the scanner to its Mavic line to take drone photography to a whole new level.

The LiDAR scanner measures the distance between the objects by tracking the time taken by the light pulse to bounce back from various objects and return to the sensor. It enables distance measuring, 3D mapping, and much more. DJI has consistently tried to improve the photography and videography experiences. So LiDAR is not out of the realm of possibility. LiDAR sensors are already used in large commercial drones. 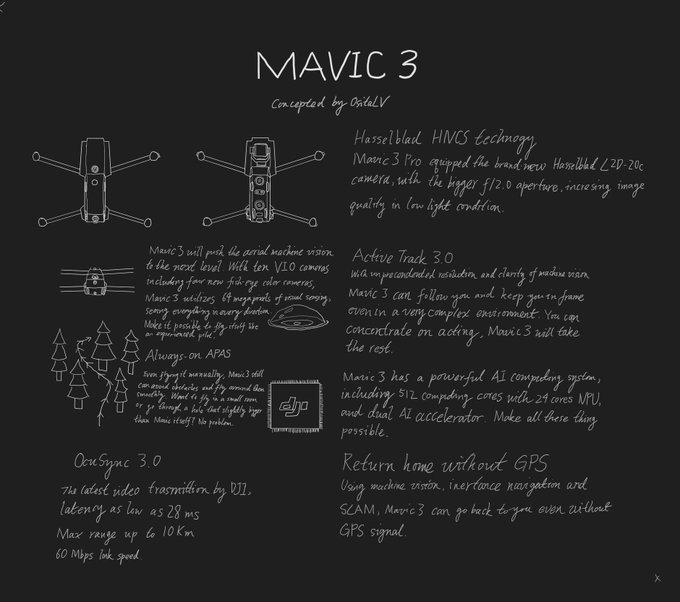 However, OsitaLV’s hand drawing shows the LiDAR scanner facing the bottom, which would restrict its usefulness. It can’t be used for obstacle avoidance. Of course, we don’t know if or how DJI would go about it. The Chinese company could implement it in a different way. But given the supply chain disruptions caused by the COVID-19 pandemic, it could be difficult for the company to secure the sensors in large quantities.

What Drone users want to see

Should the Mavic 3 include a Smart Controller?

Mavic 3 to use the DJI Fly app?

The Mavic 3 Fly more combo should include?

Results show that the most demanded thing 33% of people want from the fly more combo is extra batteries. 22% want the fly more combo to include a car charger. Whereas, 16% wanted to add ND filters. Then the hard-shell case was at 15%.  And 12% of users voted for a multi-battery charger.

Another big news came around in regards to the pricing of the DJI Mavic 3, as according to reports, an industry insider has confirmed the prices and they appear to be much higher than fans have previously speculated. Although there is no official word on how much the upcoming drone DJI Mavic 3 would cost, Tech Drone Media’s Henrik Olsen claimed on social media that the product will have a listing price.

But the insider reports that the prices might even go above what the tech drone expert has estimated as, the expected prices are to be,

This is a huge let-down as long awaiting fans feel heartbroken with the expected jump in prices, especially if they were on the lookout for the Cine Premium Combo.

A Quick Review Of Mavic Air 2

DJI has already launched the Mavic Air 2. It comes with a lot of interesting features, including having a 42 mph flight speed and 34-minute flight time. Apart from that, for the newly released drone the prices are fair.

Here are some of the amazing features of the DJI Mavic Air 2:

As with our earlier post, the newly released DJI Mavic Air 2 comes with a design that looks like DJI Mavic 2 Pro. Now, we can see a lot of improvements in different areas, including flight time, image & video quality, and speed.

What do you expect DJI to include in the Mavic 3 series? Let us know your views in the comments below.

This article was updated with the latest information on October 8, 2021.

Viral Video: Eagle grabs a drone and flies away with it at the beach