A large number of people running macOS Catalina on their MacBooks are experience an annoying graphics issue while using Google Chrome. The problem is more rampant for people who have updated their 16-inch MacBook Pros to macOS Catalina 10.15.4. While users have flooded Apple and Google’s support forums with complaints, the two companies are busy blaming each other.

Google Chrome Graphics Issue: Who is going to fix it?

Google has confirmed to PiunikaWeb that it was aware of the graphics issue haunting the Chrome browser on MacBooks. The glitch causes websites to refuse to render. As a result, the users see a flood of horizontal blue lines on the screen. This is what a user shared in the Google support forum. 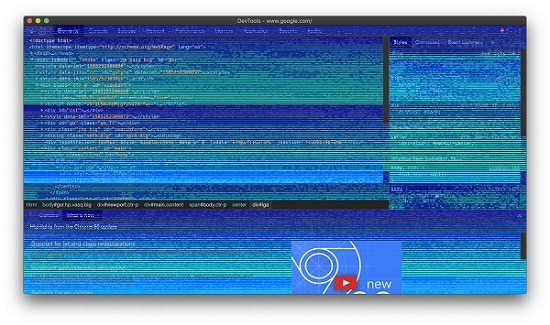 Some of the affected users said the issue surfaces when the laptop wakes up from sleep. Others experienced it after running their laptops overnight.

Google engineers said in the support forum that Apple was aware of the issue and was working on it. The problem was with Apple and macOS Catalina. Even Apple told PiunikaWeb that it was working to resolve the issue, and users could expect a fix soon.

In an unexpected turn of events, Apple told Forbes it was not aware of any such issue affecting Google Chrome on MacBooks. The Cupertino company does “not have anything to contribute.” Google has already blamed Apple for the issue. Irrespective of the blame, what is causing the problem and who is going to fix it? Only time will tell. For now, the only thing we can say for sure is that a lot of people are frustrated.

The 16-inch MacBook Pro has some GPU issues. Some affected users started digging and discovered that turning off GPU Hardware Acceleration in Google Chrome settings could fix the issue, at least on the 16-inch MacBook Pro. This is just a temporary fix, though. And it could negatively affect the performance.

To disable GPU Hardware Acceleration, open the Chrome browser and paste “chrome://settings/system” in the browser. Then toggle off “Use hardware acceleration when available.” It should resolve the issue for now.

This is not the first time we are witnessing an issue with Google Chrome. In the last few months, users have complained about Roblox issues, Facebook Live not working on Chrome, and many others.