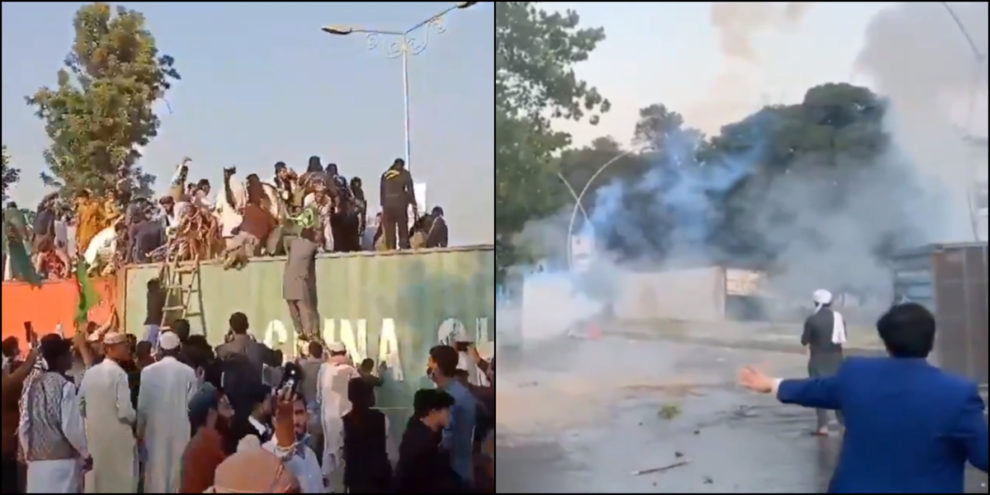 After the French President’s remarks regarding Islamophobia, there have been widespread protests by Muslims across Pakistan, Bangladesh, and India. Several movements have sparked up, calling for a boycott of French products and condemning the stance maintained by the French President.  Today evening, a crowd of protestors began marching towards the French embassy in Islamabad. The situation quickly grew tense as protestors chanted slogans and became restless, the Police had to eventually resort to teargas.  The protests sparked near the French Embassy in Islamabad as a result of the Islamophobic stance maintained by France.

News outlets reported that the Police had to use teargas shelling and aerial firing to disperse the crowd marching towards the French embassy in Islamabad. The protestors mainly included traders from the Aabpara Market, the protestors organized the demonstration to condemn the publication of blasphemous cartoons of the Prophet Muhammad in France.  The statements made by President Emmanuel Macron on the subject served as fuel on an already burning fire.

Prior to the protest, the local administration in collaboration with the Police had already sealed the road at Serena Chowk with the help of containers in order to hinder the marchers from going forward. When the protestors did not disperse and attempted to remove the containers to move forward, the Police resorted to teargas shelling and aerial firing to control the situation.

Heavy enforcement of Police has been ordered to remain stationed in the area as the protestors are still present on the road that leads to the French embassy. The French embassy is located at the Diplomatic Enclave near the Serena Chowk.

Protests by Muslims across Pakistan, Bangladesh, and India

Today morning, Prime Minister Imran had addressed the Rehmatulil Aalimeen (PBUH) Conference where he said that the West was unable to comprehend the relationship Muslims had with Prophet Muhammad. He further maintained that Islamophobia would continue to spread if the present situation remains unchecked. “The blasphemous caricatures are a crime, not freedom of expression,” the prime minister emphasized.

Protests are also being organized in other states. In Bangladesh, thousands of protestors marched through the capital, while sloganeering “Boycott French products.” The protestors also displayed banners calling Macron “the world’s biggest terrorist”.

“Macron is leading Islamophobia. He doesn’t know the power of Islam. The Muslim world will not let this go in vain. We’ll rise and stand in solidarity against him, ” stated the Dhaka demonstrator, Akramul Haq.“We hold the French president responsible for acts of chaos and violence that are taking place in France because of his comments against Islam and against Muslims,” stressed Ikrima Sabri, the acclaimed preacher who delivered the sermon at mosque al-Aqsa.