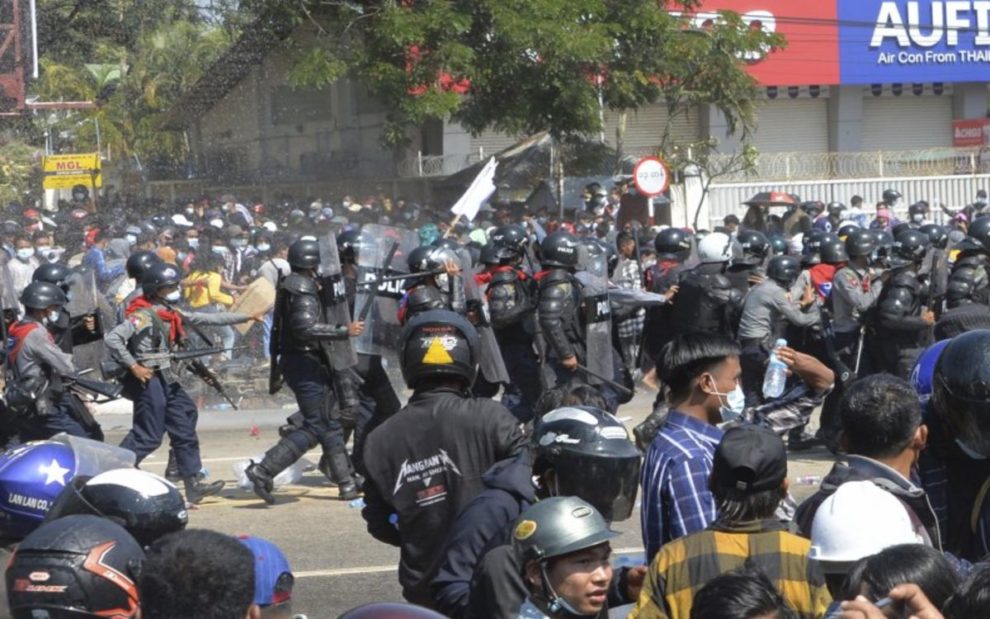 The situation is becoming increasingly serious in Myanmar. Contrary to the demands of international society to maintain calm and peace, tensions have increased, as have protests, violence and instability. On Sunday, at least 17 people died during protests against the military coup.

Protests rise in the country and the military react brutally.

The military has been in power for a month in Myanmar. Since the beginning, demonstrations in favor of the former government, led by State Councilor Aung San Suu Kyi and President Win Myint, have been witnessed in the main Burmese cities. However, over the past weekend, supporters of democracy carried out a joint act far greater than had been registered until then. Tens of thousands of people took to the streets across the country, just before the month-long mark of the military coup. As time goes on, violence increases on both sides. Protests increasingly disrupt public order and police reactions increasingly adopt more brutal containment tactics, leading to the deaths of several people.

As the situation worsens in Myanmar, international reactions have also strengthened. Washington, which has severely criticized the military’s actions since the beginning of the crisis, has already announced that it is considering further measures to pressure the new government. In the face of protests, US National Security Advisor Jake Sullivan said in a statement: “We will continue coordinating closely with allies and partners in the Indo-Pacific region and around the world to hold those responsible for violence to account, and to reinforce our support for the people of Burma [Myanmar]. To that end, we are preparing additional actions to impose further costs on those responsible for this latest outbreak of violence and the recent coup”. In the same sense, in a recent publication on social network, US Secretary of State Antony Blinken condemned the military saying: “We condemn the Burmese security forces’ abhorrent violence against the people of Burma & will continue to promote accountability for those responsible. We stand firmly with the courageous people of Burma & encourage all countries to speak with one voice in support of their will”.

So far, the officially announced measures against Myanmar have been operated on an individual basis, targeting the main Burmese military leaders. US and UK lead the international campaign against Myanmar, being the countries that impose the most sanctions. The American government recently sanctioned Lt. Gen. Moe Myint Tun and Gen. Maung Maung Kyaw, who were appointed to the State Administration Council. However, it is expected that from now on the measures will become much more rigid and not only target individuals but reach Myanmar as a country. The West is likely to adopt economic blockades and sanctions to isolate Myanmar and force the new government to step down from power before completing a year in the State of Emergency – the time the military said the provisional government would last before the next elections. Likewise, a more active stance is expected from the United Nations. Last week, the Burmese ambassador to the UN, Kyaw Moe Tun, asked the Organization to establish a global ban on any cooperation with the military government. The request is audacious and has the clear objective of overthrowing the military through strong isolationism.

As a Burmese internal response to the coup, Aung San Suu Kyi’s main allies recently announced that they will form a “provisional government” that will rival the military and claim legitimacy within international society. Sa Sa, who has been named as envoy to Myanmar’s dissolved parliament, announced that deputies who have not been arrested are already cooperating to form this anti-military coalition through a temporary government that will claim power. He also said that the politicians involved in this plan are aware of the risks they face in a State of Emergency, but that they are really willing to do so.

With this scenario of brutality, violence, and sanctions, we cannot expect anything positive for the near future in Myanmar. If the dissolved parliamentarians really form a provisional government, it will surely receive recognition from the UN and will gain economic support from the West, where the greatest interest in overthrowing the military comes from, but, in the same sense, it will certainly worsen the tensions and lead to more violence.

The Chinese silence is curious. Historically, the Burmese military has a more pro-Chinese attitude, while Democrats sympathize with the West. Western media accuse Beijing of supporting the coup for not emphatically condemning it – just asking the Burmese for “calm”. The fact that it does not condemn it publicly does not mean that China supports the coup, but only that the country seeks a position of neutrality considering that the attitude of the military is condemnable but at the same time beneficial to Chinese interests. However, if there is indeed greater Chinese involvement with the military, the West will have to be more careful when considering the sanctions, it will apply against Myanmar.

Violence is absolutely reprehensible and police officers involved in the death of protesters must be identified and punished. However, we must consider whether it is really prudent to impose sanctions on a country because of police violence. Containing protesters is a difficult task for any security force and there are errors worldwide. Even the most developed Western democracies have their police violence scandals – especially the US, which leads the campaign against Myanmar. Still, if sanctions increase, the Burmese authorities’ response will tend to become even more violent, as the military can interpret that there is direct cooperation between protesters and foreign forces interested in overthrowing the government and will then take even more severe exception measures.