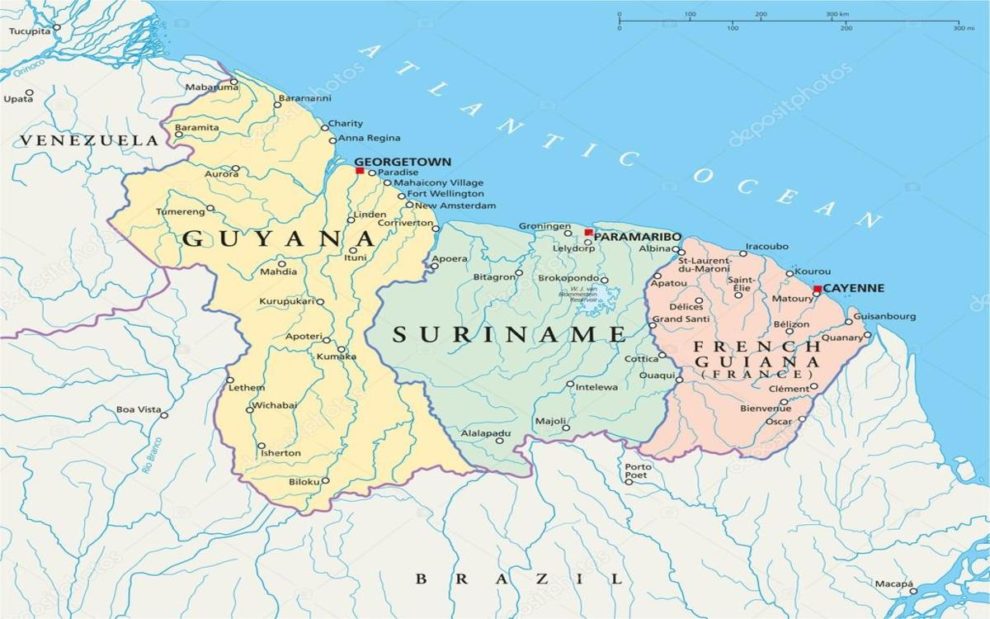 Although Guyana’s newly discovered oil reserves and US interests in the region have been the focus of attention, not many analysts have been noticing neighboring Suriname, one of Latin America’s poorest countries. Guyana’s prospects have certainly changed tremendously – its economy was forecasted by the IMF to grow 85% percent this year. We should expect similar things in Suriname with the discovery of new oil fields offshore that are estimated to have  1.4 billion barrels, according to Rystad Energy. This has already attracted interest from foreign investors.

The wider Guyana-Suriname Basin is being described as the world’s number one offshore exploration. ExxonMobil has already discovered the equivalent of more than 8 billion barrels worth of oil in the region and has announced its 18th oil discovery in the Stabroek block in Guyana. Oil experts believe that what Exxon is doing in Guyana can be reproduced in Suriname.

In fact, this makes Suriname a potentially future wealthy petro-state. This in itself is sure to place the country on the international radar soon, and this is happening at a time of crisis.

This region is indeed rich in national resources. In fact, there is also a new gold rush going on – gold prices have gone up 25% this year – with conflicts in the Brazilian-Suriname border region between local indigenous tribes and artisanal miners from Suriname and elsewhere. Such problems could be used in the narrative wars depending on how leaders in the Suriname capital of Paramaribo position themselves on the Venezuela issue. The issue of drug trafficking and gold smuggling is one of the main rhetorical weapons employed by the US against Venezuela.

Furthermore, Chinese aspirations in the Caribbean region and the Northeastern Atlantic coast of South America have been increasing friction between Beijing and Washington. Suriname has seen a recent wave of Chinese companies and Chinese migrants arrive. Also, Beijing and Paramaribo have held a strategic cooperative partnership since November 2019 – in areas such as communication, energy and infrastructure construction but also medicine, law enforcement and coordination on global issues.  Moreover, Suriname and Venezuela reaffirmed on August 10 their commitment to further expand ties, including in energy, food, and cultural agreements.

Mike Pompeo’s September 17 visit to Suriname and Guyana made him the first US Secretary of State to do so. Pompeo did ask Suriname and Guyana to favor US businesses over China. The latter has invited both South American countries into its Belt and Road Initiative.

In the near future, we can expect a lot of competition between oil giants such as Chevron, ExxonMobil and the Chinese National Offshore Oil Corporation (CNOOC) over Surinamese oil in international bidding. And, as we have seen with the dispute over  5G and Chinese company Huawei (involving Brazil as well), there is a global US-Chinese trade war going on. So, it is not just “the attraction of oil”, as some analysts have described it. Trade disputes often are an aspect of geopolitical competition and closer economic relations may accompany cooperation in other areas and narratives of “shared values”.

Another hot issue is Venezuela. It is surrounded by nations that do not recognize the current government. It borders to the west with Colombia; to south with Brazil; and, finally with Guyana (to the East). In fact, there would be, in terms of physical continuity, a straight line towards the Atlantic Ocean in the Guyana Shield Region of small countries aligned with the US over hostilities against Caracas, further isolating and encircling Venezuela.

After Pompeo’s trip, some analysts are concerned the US could be planning another intervention against Venezuela. Pompeo’s visit to Suriname was certainly also aimed at exerting some influence on Suriname ‘s new president Chan Santokhi. Last week, Washington sent Homeland, Treasury, USAID, State Department, and high level teams from three other Departments to Suriname. It is the first time that six American government agencies were simultaneously in a mission in Suriname.

To counter Chinese influence, the US can certainly offer plenty of investment opportunities and also help Suriname with its engagement with the IMF, as well as with USAID. Should Washington and Paramaribo relations further develop, Suriname shall be expected to distance itself from Venezuelan President Nicolas Maduro. Venezuela is the one hot issue the Caricom bloc, of which Suriname is a member, currently faces. So far, Caricom has maintained a non-interference position.

The northeast coast of South America remains quite tense, with migration crises, smuggling as well as narcotics-related conflicts and border disputes involving Venezuela and Guyana. The US and Guyana conduct joint maritime patrols near the Venezuela-Guyana border and the latter supports “democratic change” for Venezuela. Should Venezuela-Guyana tensions escalate, Suriname too will be pressed to take a side.

On Monday, Suriname and Guyana issued a joint statement reaffirming their commitment for cooperation in transportation infrastructure and other areas. However, competition between the two countries for the development of their deepwater resources may also ensue and Suriname’s close ties with Venezuela are certainly a concern to Guyana.

We should be hearing a lot about Suriname in the near future on the back of these developments. The discovery of oil fields is not the only thing that is new for Suriname. The geopolitical scenario too has changed, with a so-called “new cold war” going on in South America and the Caribbean between Russia, China and Venezuela on one side, and the US, Colombia, and Brazil on the other.

For Suriname, therefore, the current scenario may present an almost existential problem. Considering US history of interference abroad and the tense situation around Venezuela, Suriname could very well find out that being in the spotlight might also be a curse. In 2017 when Russian Foreign Minister Sergei Lavrov visited Suriname, Moscow and Paramaribo were close to signing a military cooperation agreement – but the conversation stalled. Suriname would perhaps benefit greatly from restarting such a conversation. Due to its size and its limitations, Suriname cannot afford to be “neutral”: it will need to take a side in the current “new cold war”.