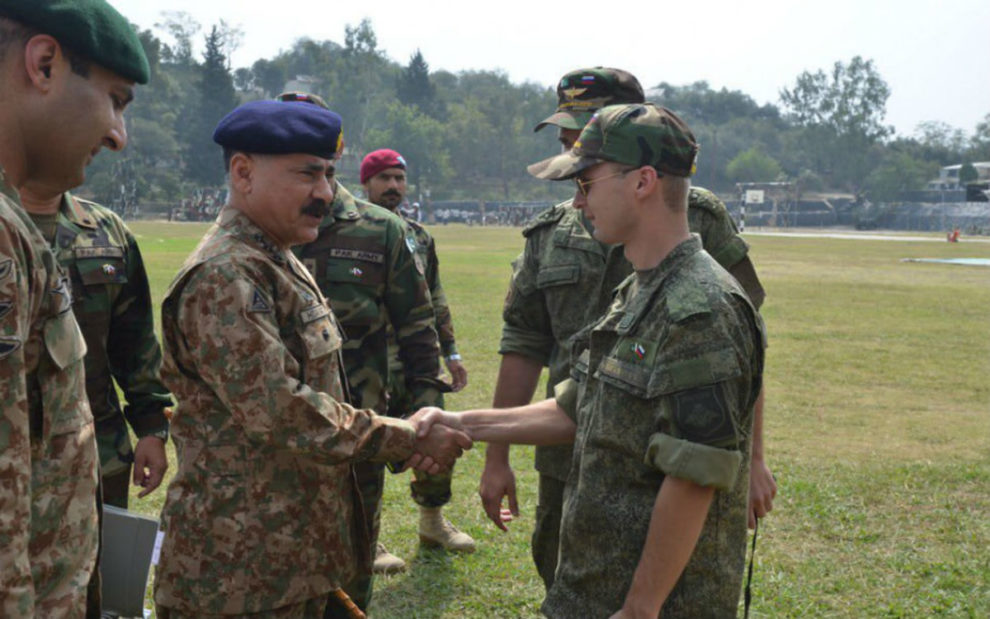 The Russian Federation Special Forces’ contingent landed in Rawalpindi, Pakistan today for the joint drill to he held between Russian special forces and Pakistan army soldiers. The two-week-long drill exercise is named DRUZBHA 5. The Inter-Services Public Relations (ISPR) broadcasted the joint military exercise in a tweet, “The exercise is aimed at sharing both armies experiences in counter terrorism domain. Sky diving & hostage rescue operations will be highlights of exercise #DRUZHBA”.

Russian forces arrive in Pakistan for a joint military drill

Druzhba is a Russian term for the word, “friendship”. The first of these joint military exercises took place in Pakistan in October 2016. After Pakistan signed a defense cooperation deal with Moscow in late 2014, the security partnership between the two states had continued to grow and strengthen. This monumental deal paved the way for the first-ever purchase of Russian military equipment that was used by the Pakistan army to strengthen its forces. The purchases included Islamabad ordering Mi-35 Hind E gunships in 2015. Pakistan went on to acquire Mi-171E helicopters from Russia as well. The equipment acquired from Russia helped Pakistan strengthen its forces.

The joint drill exercises between Russian special forces and Pakistan soldiers called Druzhba (friendship) are held every year. The joint drill exercises between the two countries are seen as a positive step towards strengthening military cooperation. The exercises signal a steady growth in the relationship between the two countries, these ties were previously strained due to Cold War rivalries that continued for decades.

The joint military exercises are designed to focus on elements aimed at enhancing interoperability between the military troops of two countries. The exercises aim to improve mutual military and security cooperation between the two countries. Pakistan’s armed forces also took part in the opening ceremony of Kavkaz 2020. Kavkaz 2020 was held in September this year, it is a multinational military exercise event. The event was held in the Russian city of Astrakhan. The Pakistan armed forces also partook in ‘Tsentr 2019″ held in Russia last year.

The DRUZHBA 5  exercises will continue till November 21. Russian’s Southern Military District revealed earlier that more than 150 military personnel would take part in the drills, 70 of this personnel belong from Special forces. The exercises are a result of nearly month-long preparations. The preparation designed the exercises to include reconnaissance, search and ambush actions in different circumstances, camouflage and covert movement on terrain, hard areas as well as the arrangement of long-term observation posts and survival in isolation from the main forces. These skills will prove immensely useful for military troops of both countries.

Joint military exercises always bear fruitful results in military expertise as well as diplomatic relations. The growing friendly relations between Russia and Pakistan are likely to serve both countries’ benefits in the future.