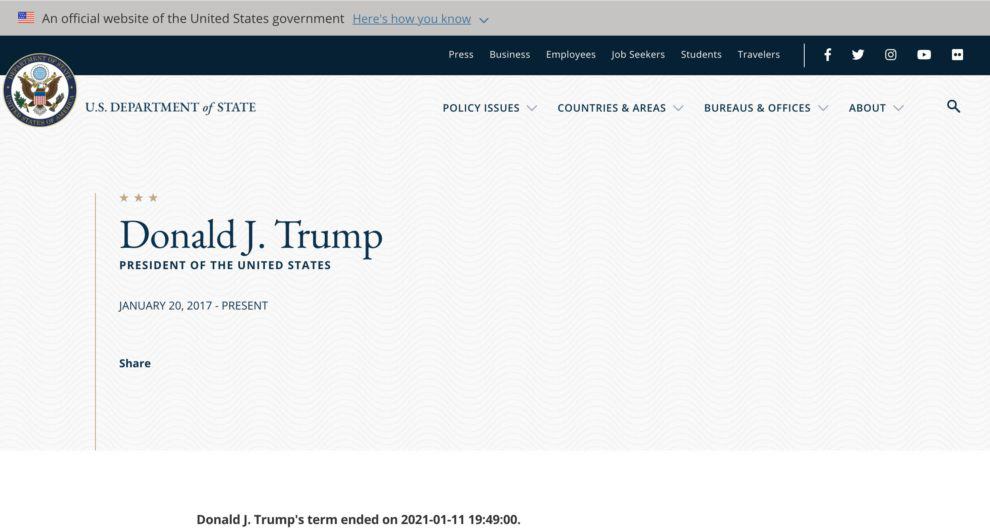 According to the official website of the U.S. State Department, terms for President Donald Trump and Vice President Mike Pence have ended.

The biographies section of President Trump and Vice President Mike Pence show that the terms for both have finished.

“Donald J. Trump’s term ended on 2021-01-11 19:49:00” is the exact text written under President’s biography section. However, the time keeps on changing when the page is refreshed.

It is not yet known what has caused this mistake, but an archived version of the same URL shows a similar message in mid-December, saying Trump’s term ended on December 17.

UPDATE: State Dept’s website is up, but the section that stated that the term for President Trump has ended is now showing 404 on the URL with the following message, “We’re sorry, this site is currently experiencing technical difficulties. Please try again in a few moments.”

According to sources of BuzzFeed News, a “disgruntled staffer” is behind the State Department site’s change of Trump and Pence’s biographies.

One of the diplomats said that Secretary of State Mike Pompeo has initiated an internal probe into the matter, reports Buzzfeed. It’s a “closed system” that is “nearly impossible to hack,” said a diplomat.

Trump is being asked to resign after last weeks Capitol riots. The majority of Democrats and Speaker Pelosi have asked Mike Pence to invoke 25th Amendment in order to remove Trump.

This is a developing story and it is being updated and more details will be published shortly. Please refresh the page for more details.