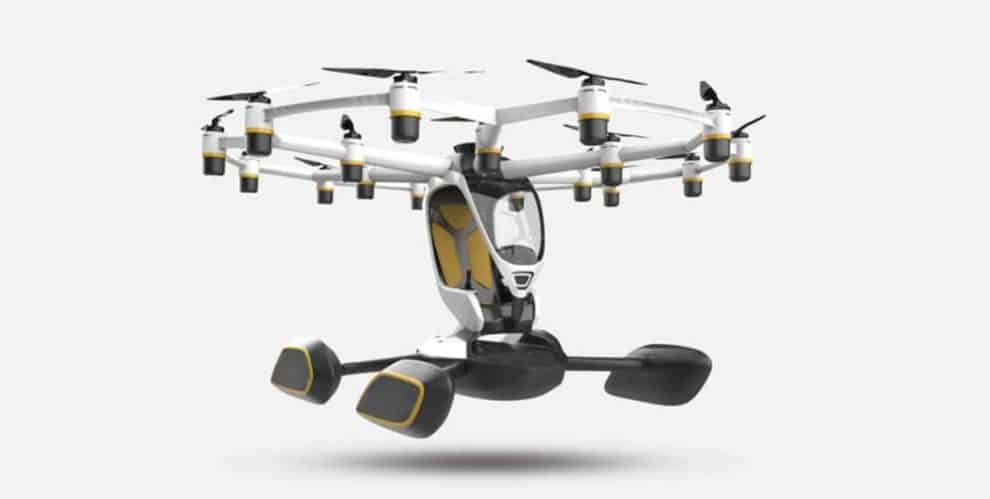 One of the goals of the US Air Force’s Agility Prime initiative is to acquire flying cars, with interest to take it to the public. Last year, the military service branch revealed its interest to explore electric take-off and landing (eVTOL) crafts. Also, earlier this year, it mentioned that it aims at the possibility of acquiring 30 of such vehicles, before the end of 2030. Many times, we’ve seen movies that utilized flying cars, but the question is will the US Air Force be able to achieve its goals? Well, according to the latest report, the branch of the US Military is now a step closer to achieving its aim. It was able to hold its first demonstration of a flying car, developed by Lift Aircraft.

In September 2019, the Assistant Secretary of the Air Force for Acquisition, Technology, and Logistics Will Roper was able to reveal the US Air Force’s plan to acquire flying cars. Here’s a brief of what Roper told reporters during the Agility Prime Launch Week.

“The vehicles that we’re exploring … [have] a lot of propellers that get you up in the air. They’re vertically oriented and then they transition over to being forward [oriented]. And there are multiple ideas and designs about how to do that.”

Speaking of the design, Roper mentioned that they include tiltrotor or thrust vector control. With that, the crafts will be able to take-off and land vertically like a helicopter but fly better like an airplane.

Interestingly, it’s not even up to a year, and the military branch has put in so much effort, making the dream a reality. Last week, the US Air Force officials gathered in Austin, Texas to witness the first demonstration of a flying car.

Speaking of the vehicle, it’s single-passenger Hexa, an eVTOL platform designed by Lift Aircraft. The 18-rotor Hexa, which consists of an open cockpit seat and surrounded by rotors, will also be marketed commercially. According to Lift, it’ll make the eVTOL craft available for customers to buy, without any need for a pilot’s license.

Here’s a picture showing the eVTOL flying car and some top officials of the US Air Force below: 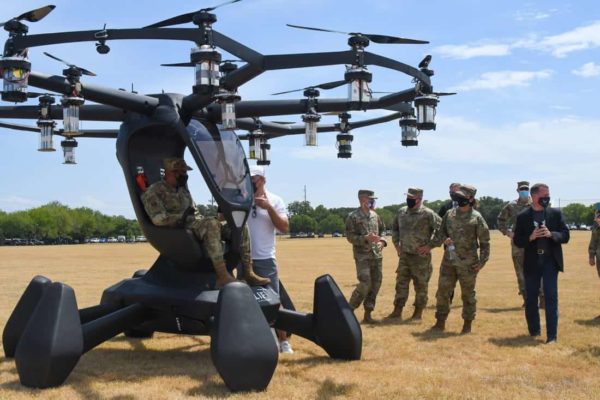 The Demonstration Of The eVTOL Craft

On August 20, the US Air Force held the first demonstration of its flying car, designed by Lift. The demo flight took place at Camp Mabry, one of the military bases in Texas. Furthermore, the eVTOL flying car was piloted by the CEO of LIFT, Matthew Chasen. Officials present during the event include the Secretary of the Air Force Barbara Barrett, Chief Master Sergeant of the Air Force JoAnne S. Bass, and Air Force Chief of Staff Gen. Charles Q. Brown, Jr. Also, some hosts from the Texas National Guard and AFWERX personnel, were also present to view the demo flight. According to an Air Force release, the demonstration exercise was organized under the Agility Prime initiative.

The Agility Prime initiative is a non-traditional program, according to a website. It focuses on “accelerating the commercial market for advanced air mobility vehicles”. Also, according to the secretary of the US Air Force, it is a program with the vision of world impact.

“We now have over fifteen of the leading aircraft manufacturers in the world. They’re applying to partner with Agility Prime, with many of them already on contract. This flight today marks the first of many demonstrations and near term flight tests designed to reduce the technical risk and prepare for Agility Prime fielding in 2023.”