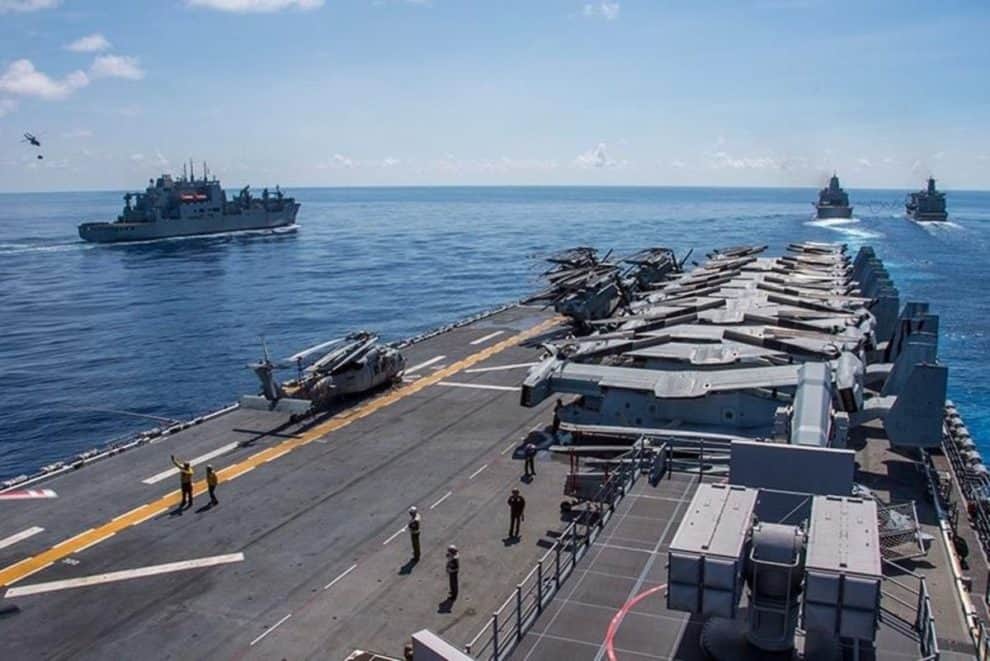 Wang Yunfei, a recently retired Chinese naval officer announced online that U.S. President Donald Trump could launch a “controlled” military conflict with China in the South China Sea to increase his chances in the upcoming presidential election. Some analysts are so confident that they can say with precision that an armed conflict between the U.S. and China in the South China Sea will be specifically at Scarborough Shoal.

Armed conflict could erupt in any part of the South China Sea, but because American and Chinese warships and aircraft carriers pass dangerously close together here, this is the most cited location of a conflict between the two countries. U.S. intrusions into the space above the South China Sea has been steadily increasing, with 35 reconnaissance missions in May, 49 in June and 67 in July. Undoubtedly the reconnaissance missions are increasing in number as hostilities continue to build month on month as we approach the U.S. presidential elections in November.

Trump cannot simply declare war on China as congressional approval would be required. Although many former U.S. presidents have declared war without congressional approval, media and rival politicians will jump on the fact that Trump declared war without approval, which could lead to an impeachment – a risk Trump is unlikely to take. Military leaders would also be against any war with China knowing that to declare victory they would have to occupy much of mainland China, including Beijing, a near-impossible task. The belligerent rhetoric of Trump and his administration however is welcomed by the powerful U.S. industrial-military complex that will massively profit from any escalation, but this will not be enough for Washington to declare war.

The American President received considerable support among American voters in the 2016 election campaign because of his anti-Chinese position, blaming China as the reason for joblessness in the U.S. and a downturn in the economy. The American people have heard endlessly that China is doing illegal maneuvers in the South China Sea, that Beijing violates human rights in Hong Kong, Xinjiang and Tibet, and that China created the COVID-19 pandemic.

It is with little surprise that anti-China sentiment has grown out of control in the U.S., with a recent Pew poll finding that 73% of Americans have a negative view of China. This is by far the worst index for China in 15 years and was a 26-point increase from 2018. Faith in Chinese President Xi Jinping to “do the right thing in world affairs” has also deteriorated, with 77% of Americans having little or no confidence in him, up 6 percentage points since March and 27 points since last year.

This large distrust the American public has against China is largely due to an intense campaign to portray the Asian country in the most negative light possible. A common tactic to unite voters behind a presidential candidate is to create a common enemy to pin problems too, including domestic issues. For Trump, China is an easy adversary to blame for the U.S.’ continued economic decline and COVID-19 getting out of control. Trump has certainly succeeded in making China the main enemy of the U.S., but will this be enough to secure his re-election against Democrat Candidate Joe Biden?

Voters see the Trump administration’s action against Beijing as an expression of American strength. By manipulating and provoking China to the verge of conflict, Trump hopes to receive support from U.S. voters in the upcoming presidential election. However, there is still a strong element in the U.S. who says that although China may be at fault for spreading COVID-19 globally, despite some theories that the virus did not actually begin in China, Trump is entirely at fault for the U.S. having over 5 million total cases and 160,000 deaths attributed to the virus.

Although Yunfei fears that the U.S. will begin a conflict with China over the South China Sea, it is highly unlikely that a conflict, which is impossible for either side to win, will ensue. Such a drastic action could in fact turn the U.S. public against Trump, especially as the death toll of American soldiers will rapidly rise in such a conflict. Having a so-called soft hostility with China via sanctions and a fake news campaign is sufficient to portray Trump as the only one who can protect America’s interests against supposed Chinese aggression. It is highly unlikely that provocations in the South China Sea will result in a conflict, especially on the eve of the presidential elections.