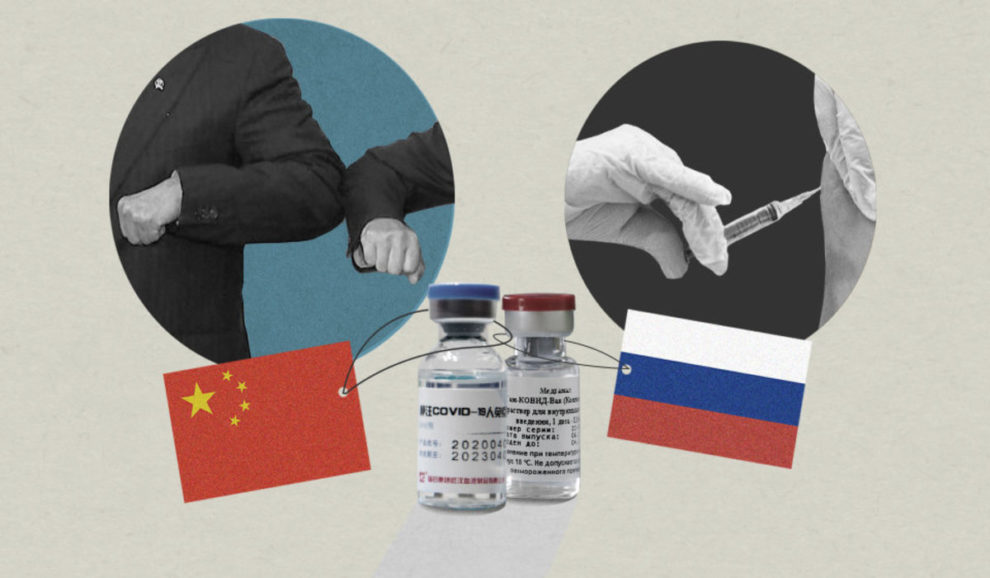 In times of pandemics and in a world of vaccine inequality, vaccine shots are now a tool for soft power. With the devastating impact the pandemic had on the economy, many countries do not want or cannot afford another lockdown, making the vaccination of citizens to achieve COVID-19 immunity all the more imperative. Because of this, there is a huge demand for COVID-19 vaccines. In this context, trade wars and geopolitical disputes – as often happens – may advance such goal, or rather delay it. Unfortunately, the civilian population pays the price.

Moscow and Beijing are competing to supply vaccines and New Delhi also plays an important role.

Lithuania, in its refusal to procure vaccine from neighboring Russia, is an interesting case. Nowadays, we can even talk of some kind of vaccine “warfare”: Israel, for example, blocked vaccine shots from entering Gaza (Palestine).

Meanwhile, several wealthy countries are in fact hoarding vaccine supplies. In mid-January, a small number of these countries (which together comprise only 16% of the global population) held 60% of all COVID-19 vaccines that had been purchased globally. Most of these countries have over 100% coverage. On top of the list is Canada, which purchased enough shots to actually cover more than five times its total population (most of it was pre-ordered but has not yet reached the North American country). The World Health Organization has described the current situation as a “catastrophic moral failure”

However, the economy is not the only factor preventing some countries from obtaining enough shots. Peru has been going through a severe political crisis – such instability caused no less than nine changes to the Minister of Health post and four different presidents in just a few years. All that change made it impossible for the Peruvian government to proceed with negotiations in time to get enough vaccines. A similar situation is faced by Brazil: 5 Brazilian state capitals have run out of vaccines and six others could run out of it soon.

In Africa, most countries are receiving their vaccines from India, China, and Russia. Africa is simply not included in the supply priorities for most Western pharmaceutical industries. Chinese and Russian vaccines are in high demand globally and so they compete internationally to meet a growing global demand – and also New Delhi, to a lesser extent. Such trade competition also has diplomatic consequences.

In this kind of diplomatic (and in some cases humanitarian) race, the highlight goes to India and its vaccine grant assistance policy. New Delhi has been dispatching millions of vaccine doses of its own nationally-manufactured vaccine to its neighbors in South Asia and also abroad – mostly to key partners in the Indian Ocean. It is part of the Indian “Neighborhood First” initiative, in line with its Vaccine Maitri (Vaccine Friendship) diplomacy. India has basically stepped in when China failed in doing so in the region. In line with its “Neighborhood First”, amongst the first to receive the shots were India’s neighbors like Bhutan and Nepal, but also key partners in the Indian Ocean like Mauritius, Seychelles, and Sri Lanka. Predictably, in the list of beneficiaries, Pakistan (India’s main rival) is nowhere to be found.

Besides such assistance moves, India is also commercially supplying vaccines to several nations, including Brazil, South Africa, and Saudi Arabia.

Another highlight goes to Africa. The African Union, through its Africa Centre for Disease Control and Prevention agency has shown a lot of continental coordination regarding the pandemic. The African Union has been securing doses for many African countries.

The demand (and the diplomatic opportunities) goes beyond vaccines as well: China and Russia have been distributing masks and other such protective equipments since the outbreak of COVID-19 to the point of making it an important tenet of their diplomatic relations.

Once scorned (because it was rolled out before final trials), the Russian Sputnik V now seems to be the favorite. According to a stage trial published February 2 in the esteemed Lancet medical journal, it gives a 92% protection and there were no serious illness or deaths in the vaccinated group during the trial. According to the study, it is easier to be stored and transported (between 2 and 8C degrees) and it employs in its second dose a slightly different version, which gives longer-lasting protection rather than using the same identical vaccine twice.

Amid last year’s trade war between the US and China, the Chinese Sinovac vaccine was also attacked. Brazilian President Jair Bolsonaro – who was perhaps Trump’s most loyal ally –  even claimed (tongue-in-cheek) that it could turn people into alligators. Unbable  to secure in time enough shots of the British AstraZeneca vaccine (initially its favorite choice) or of the Pfizer one, the  Brazilian government ended up turning to Sinovac shots, and is closing a deal to purchase the Russian Sputnik V and the Indian Covaxin.

In this new game of vaccine diplomacy, both Russia and China, risk under-delivering (in face of what they promise). Russian Spokesman Dmitry Peskov has admitted in a statement that Russia’s productive capacity cannot meet the high international demand for vaccines.

There is also a problem with current bilateral agreements, as it can be seen in the recent case of South Africa, which earlier this month placed its AstraZeneca shots on hold after a study showed it is not efficient against the new South African COVID-19 virus variant. If a rational global system existed, these shots could be redirected to another country where such virus variant is not present, but such is not the case, argues Suerie Moon (a co-director of the Global Health Centre – Graduate Institute Geneva).

In the post-pandemic world, governments will end up turning to countries that are not close allies or even rivals to secure vaccines. Multilateral arrangements will be necessary as well as international cooperation.

Uriel Araujo, researcher with a focus on international and ethnic conflicts