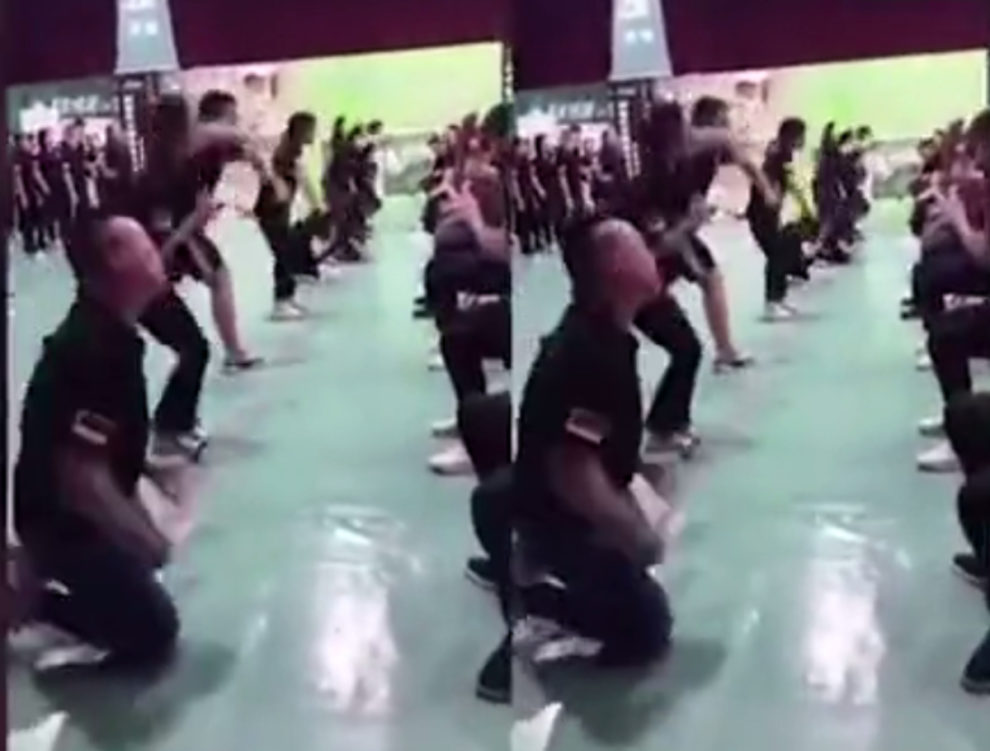 A video going viral on social media shows Chinese company staff slapping themselves to “build resilience.” The Chinese company in question is currently under investigation for ordering its staff to slap themselves hard on their faces repeatedly. The video making rounds on social media shows a group of staff members kneeling down on the floor while chanting slogans and repeatedly slapping themselves.

The 33-second clip was recorded in the city of Dongguan, located on the outskirts of southern China. The staff members are kneeling down in a row of eight women and men. The staff members are all dressed in similar black clothing and are kneeling in front of their respective trainers. At least one of the staff members is seen repeatedly slapping himself in the face with great force. At the same time, others are also seen slapping their hands on the ground aggressively or striking their fists through the air to punish themselves.

The video shows that the man who is repeatedly slapping himself in the face takes off his shirt at one point in the 33-second video. He then begins to beat the shirt against the floor aggressively, he repeats this behavior several times. After investigation, it was found that the company in question sells furniture. The company also maintained that it did not force its employees to partake in these activities, but they did so “voluntarily.”

The company claims they were “training sessions”

According to the report shared by Southern Daily’s, the training program seen in the video was devised to assist the firm in establishing an ‘iron army’ of sales. The activities in the training session intended to enhance the resilience of the staff members so they could perform their best while selling their products. Zhang Min, the brand manager told a local news channel that the training program was devised and organized by a third-party agency. The involvement of a third party agency does not render the company who employed these staff members blameless.