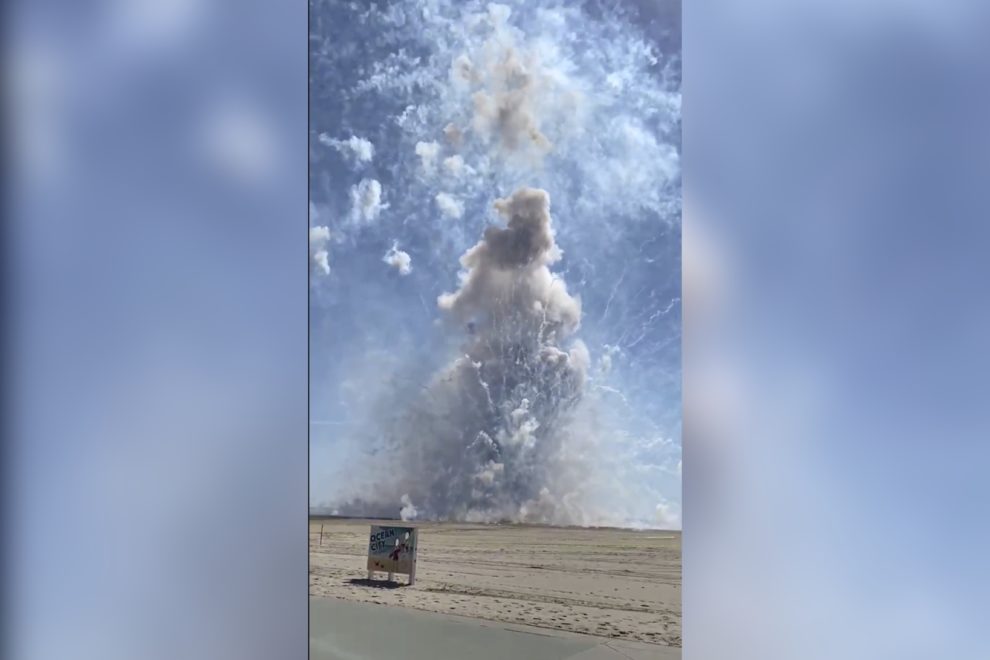 In a statement, the Ocean City Fire Department says no one was injured after a truck filled with fireworks exploded unintentionally on the beach, prior to a July 4th show planned for this evening.

All fireworks shows in Ocean City have been canceled “due to an abundance of caution” after the fire department and Maryland State Police responded to a fireworks explosion on the city’s beach.

Videos of the incident:

So this just happened in Ocean City, MD. pic.twitter.com/B0djA8JxF7

ocean city fireworks had a bit of a problem this morning pic.twitter.com/kWFwX1Lmnk

Fireworks went off in Ocean City this morning on the beach, down by the inlet. Not sure if there are any injuries. Video taken by my sister-in-law. pic.twitter.com/m5MFcRtRUN

Fireworks in Ocean City, Maryland, exploded prematurely as workers prepared for the show.

Employees of the fireworks company received minor injuries and refused transport to the hospital.pic.twitter.com/NhKxEJk9Wk

All firework shows in Ocean City have been canceled tonight after a truck carrying fireworks exploded on the beach. The town says they have made the decision to cancel “out of an abundance of caution,” and OC Fire Marshals are continuing to investigate. More tonight @ 6 on @wboc. pic.twitter.com/0OkY3vkr3Q

On Sunday, July 4, 2021, the Ocean City Fire Department was alerted for a vehicle fire at Dorchester Street and the beach. Firefighters arrived to find that no vehicle was on fire; however, there was an unintentional discharge of fireworks that were being set up on the beach for the Town’s fireworks show.

During the unintentional discharge, employees of the fireworks company received minor injuries and refused transport to the hospital by Ocean City Paramedics. No beach or boardwalk patrons were injured.

“Our Fire Marshals are on the scene and will investigate the cause of the unintentional discharge,” said Ocean City Fire Chief Richie Bowers. “Prior to the fireworks being off loaded from the vehicle, Fire Marshal’s secure a safe zone around the fireworks and put other safety protocols in place. It is this very zone and safety protocols that kept anyone else from being injured,” he concluded.

The Ocean City Fire Department will provide updates as they become available.

Reports of stabbing at Annapolis High School in Maryland

Active shooter in Maryland’s Frederick, all schools go under lockdown