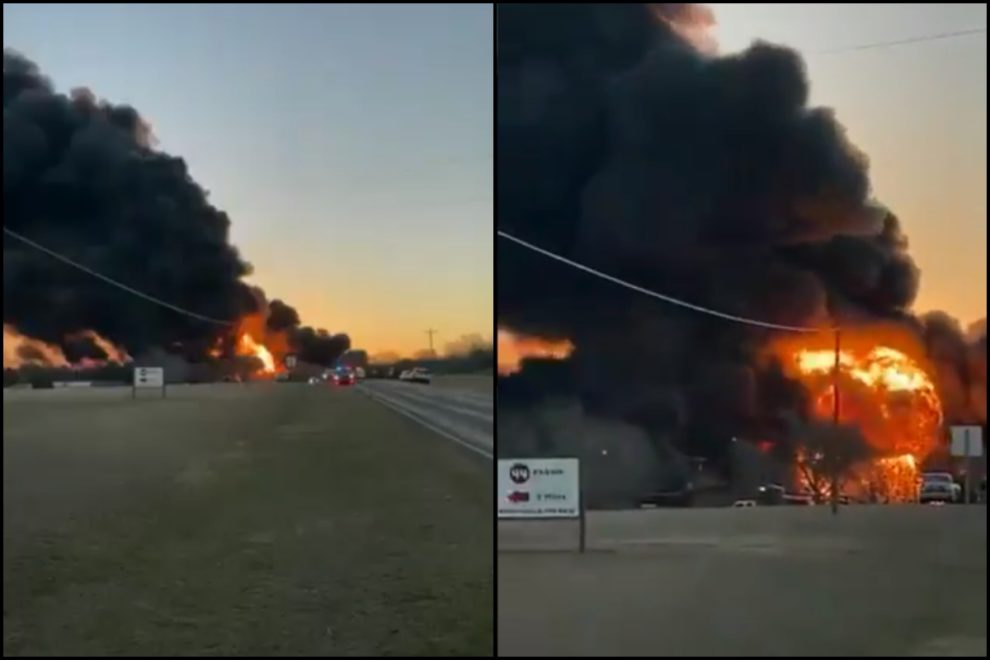 A train collided with an 18-wheeler outside Cameron, Texas, in Milam County on early Tuesday morning, police confirmed to local media. The Cameron Volunteer Fire Department is on the scene of the blazing collision.

The train was carrying oil tankers and exploded due to the crash. Authorities have declared the crash a hazmat situation, according to the Cameron Police Department.

EXPLOSION AND FIRE reported this morning in Milam County, TX. FM 2095 southeast of Cameron. Avoid area! 18-wheeler vs. train. No details on injuries or deaths. We have crew on the way. – Newsanchor Rusty Surette

Milam County Judge Steve Young said people in the area are advised to evacuate their homes.

Videos from Milam county after train collides with 18 wheeler

BREAKING! A train collided with an 18-wheeler outside Cameron, Texas, on Tuesday morning. The train, which was carrying oil tankers, exploded as a result of the crash, and authorities have labeled the crash a hazmat situation, pic.twitter.com/OPljVYwMpw

Police first received news about the crash around 6:45 a.m. CT and responded with mutual aid on the scene.

Both the train conductor and the truck driver survived the crash without major injuries, according to a local news outlet.

During a press conference around 10 am. Sheriff Chris White said, “there are no injuries”. White said the collision occurred at a railroad crossing near 2095-FM around 6:40 a.m. “Luckily, the hazardous material was a little further back,” he said. “By the grace of God, we were saved by that one.”

Sherif White further added that the fire is primarily petroleum and there are no reports of chemical hazards. But as a precaution, they evacuated senior individuals who live in the area and said voluntary evacuations are also taking place. The police are advising people in the area to avoid Highway 90.

Reportedly, College Station Fire Department sent its Hazmat truck and team to Cameron to assist with the fiery train crash.