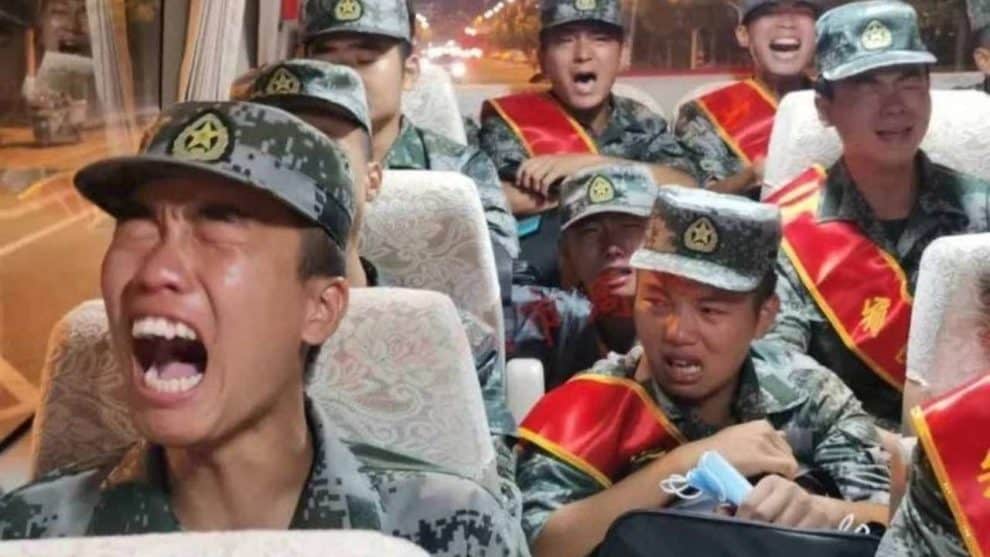 Tears of farewell or fear?

China has responded to this video by clarifying that the Chinese soldiers in the video are not crying out of fear. The video showed young soldiers singing a well known Chinese military song “Green Flowers in the Army.” The video showing emotional soldiers is not actually capturing sentiments of fear, but that of a farewell from their homeland.

Indian media also expressed disappointment with Taiwanese media for twisting narratives. Taiwanese media such as Liberty Times and Taiwan News, are known for their pro-Independence and an anti-China stand. Taiwanese media made mocking remarks on the soldiers and interpreted their actions as them being “cowards” for being afraid to face the Indian military. It is well known that China considers Taiwan as a breakaway region to be reunified by force if necessary. Moreover,  military tension between China and Taiwan is rapidly escalating at the moment.

The video shows recruits from the Yingzhou district of Fuyang city in Anhui traveling in a bus to the border. The video was shared across online platforms in China as well as on Twitter and on Facebook, interestingly by a Pakistani comedian Zaid Hamid. Hamid then wrote that China’s one-child policy is “seriously hurting the motivation level of our Chinese brothers.” Hamid’s comments were interpreted as being extremely insensitive. He then added, “We Pakistani support you China. Stay Brave.” Although Pakistan is an ally of China, Hamid appeared to be poking fun at the tender, green recruits.

The viral video captures some of the new recruits, most of which are reportedly college students, and five of them had “proactively volunteered to serve in Tibet,” which borders the Ladakh region where India and Chinese soldiers are dangerously standing face to face. The emotional sentiments can be understood, everyone would be sad at being deployed far away from the safety and comfort of their home. “In the video, the soldiers can be seen sobbing hysterically as they struggle to sing the words to the PLA song ‘Green Flowers in the Army,’” reported the Chinese media.

The video was further clarified by a nationalist tabloid. The Global Times reported on Tuesday, “At that time, they were bidding farewell to their parents and sang the famous military song ‘Green Flowers in the Army’, and they sang ‘Go home when you celebrate your work’, completely contrary to the mood created by Taiwanese media.”