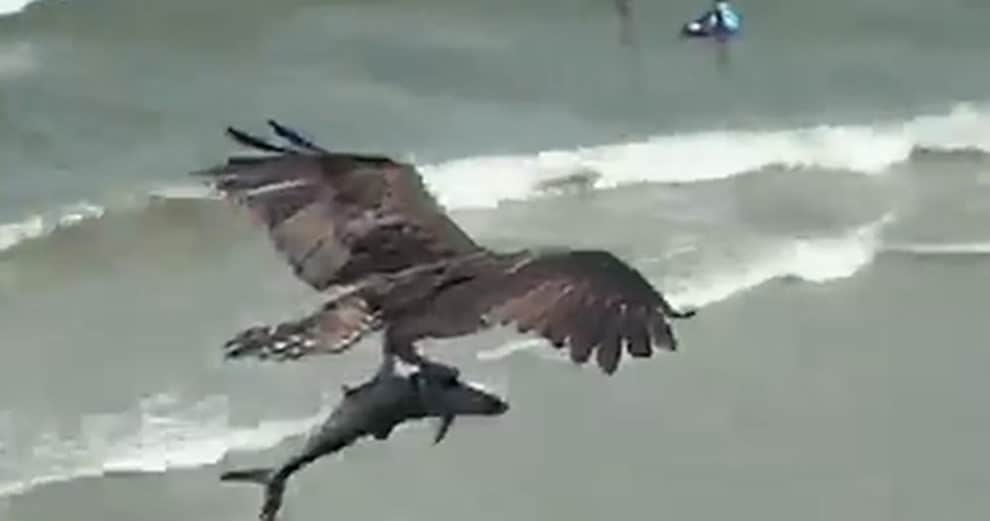 A new viral video has emerged from Myrtle Beach in South Carolina showing a bird (looking like an Eagle or an Osprey) carrying a baby shark in its talons.

The video was shot by a Tennessee woman from her apartment building where she was staying on vacation.

Users on Twitter and other social media platforms instantly went crazy over the video.

The footage of the ‘Osprey or Eagle carrying shark’ was shared by a lot of users on social media, and it sparked debate over what kind of bird it was and whether or not it was carrying a shark or some other fish.

@sfpelosi: Live look at Joe the Eagle saving US from Don the Shark

@Wayno119: Eagles grabbing sharks out the ocean? Streets is done.

@FullVapor: 2020 in a nutshell. An osprey with a shark in its talons, soaring through the sky. Let’s pretend that the osprey is a bald eagle and the shark is Antifa!

@shipatadistance: Okay. We get it. Eagle and a shark. Awesome. I’ve seen it on my feed like 50 times today.

@KennyBrown14: Man this is the craziest thing I have ever seen in my life. That looks like an eagle, and the wing span is so huge. Just imagine your on the beach and a shark drops from the sky, that would scare me for the rest of my life.

@Surfbrainwaves: First the Bronze Age man wrestles a shark, now an eagle flexes by carrying a shark. The American spirit is alive and well?

@DrumFillz91: Why are people so worried? The eagle’s just being considerate and giving the shark a ride somewhere. It’s obvious they know each other.

So, which of the above comments on ‘Eagle carrying the shark video’ you like the most? Let us know in the comments.

US extends tariff exemptions on Chinese medical products due to Covid

US targets North Korea missiles with sanctions on Russian banks