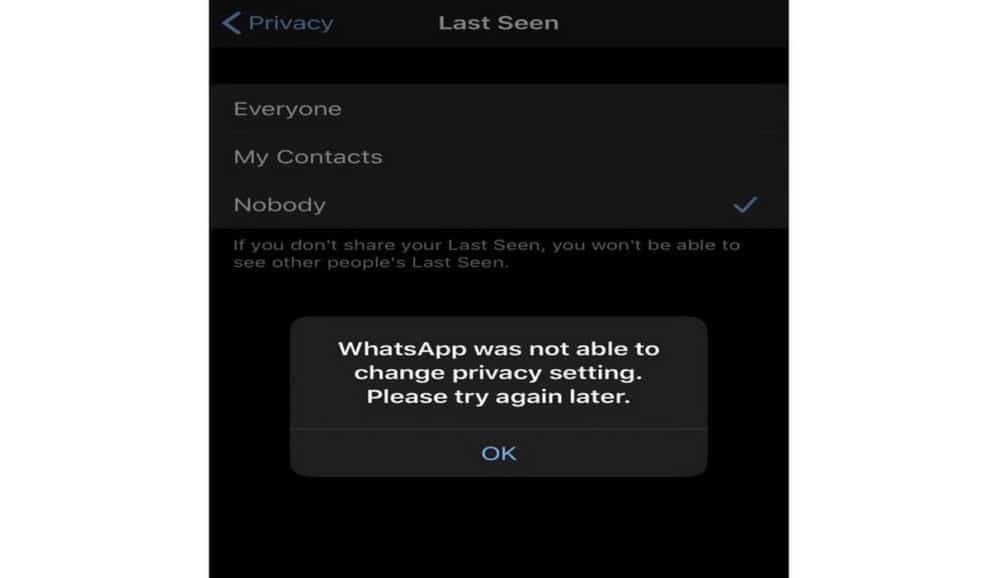 According to the latest reports, thousands of people have taken to Twitter and other social media platforms to complain about a particular Whatsapp glitch. Many users are complaining that their last seen feature switched from everyone to nobody.

WhatsApp Glitch Turns Last Seen Feature From Everyone To Nobody

According to some users, they are experiencing a WhatsApp glitch, which changes their last seen status automatically from everyone to nobody, even ‘online’ status of WhatsApp users are unable to see. Let’s have a quick look at one of the users’ complaints below:

According to a Twitter user @ruchikarajpal, the glitch is from WhatsApp servers, as she cannot see anybody’s last seen time.

“There’s a glitch in @WhatsApp servers. We cannot see anyone’s last seen time, online, or typing status. Wouldn’t even have noticed it if my mom wouldn’t have bugged me for an hour about this.@Facebook#whatsappglitch #Facebook#WhatsappGlitch #whatsapp”

The glitch appears to have affected the ability to see when a person or friend is in the process of typing back, which usually is shown at the top bar of chat window in the app.

Apart from that, all efforts by WhatsApp users to fix the glitch and change the status from nobody to everyone proved unsuccessful. Instead, it keeps showing an error message which reads: “WhatsApp was not able to change the privacy setting. Please try again later.”

According to the Down Detector self-reporting website, the glitch seems to be affecting most users across the world. However, a larger percentage of people from Europe are most affected by the issue so far.

Many more users on Twitter are reporting the same issue:

aaftab_azizi_09: Relationships across the globe are crumbling now because they can’t see their partner’s last seen

@viralj320: #WhatsApp down People whose last seen is private are not aware that what’s going wrong

@MonwabisiMbonda: WhatsApp exactly what i wanted, no last seen, no online feature. I can now cheat in peace.

@shetty_prathvi: Just realised that my settings for ‘last seen’ has been defaulted to ‘Nobody’ automatically and i am unable to change. Others also are facing the same issue. My phone is on iOS 13.5.1 @WhatsApp

@yeh_kya: Do we have a ‘Last seen’ issue going on, on #Whatsapp? I can’t see anybody’s. Can anyone?

@azeemistan: Whatsapp server down. Users facing issue with last seen and privacy settings in Asia and some other countries. 2,200 people reported the issue.

YouTube link preview not showing for some WhatsApp users