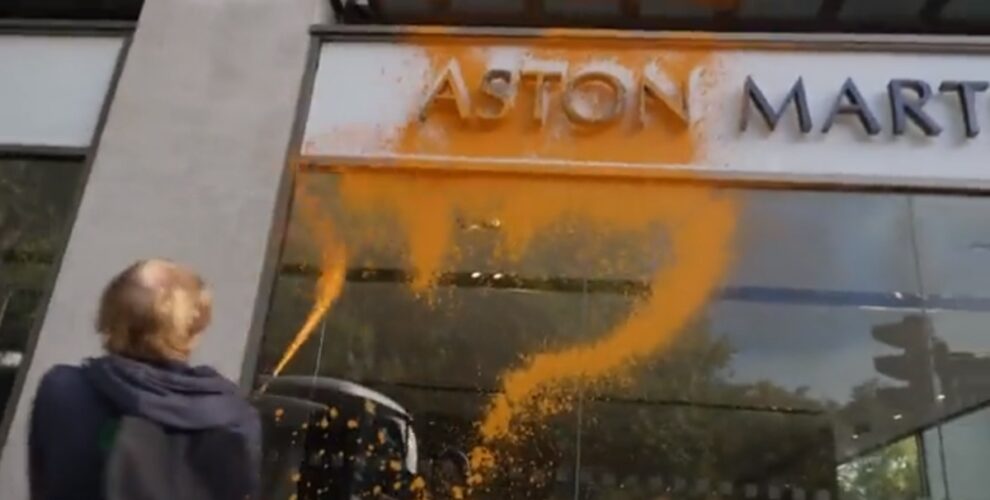 Climate activists on Sunday sprayed orange paint over an Aston Martin showroom in central London, as the government vowed new powers for police to halt an intensifying wave of “direct action” protests.

Members of the group Just Stop Oil also staged a sit-in protest on Park Lane where the sports carmaker’s store is located in an exclusive area of the British capital.

Another spray-painting protest by the same group on Friday targeted the headquarters of London’s Metropolitan Police, who arrested 28 demonstrators.

Then on Saturday, Animal Rebellion protesters poured milk onto shop floors and displays at high-end retailers across Britain including Harrods in London, demanding the world end cattle farming.

Home Secretary Suella Braverman said she was introducing stronger legislation this week to counter citizen protests by groups such as Just Stop Oil and Extinction Rebellion.

Under the plan, the government would be able to apply for legal injunctions to outlaw such protests ahead of time, and make it easier for police to protect “essential” goods, services and infrastructure.

“I will not bend to protestors attempting to hold the British public to ransom,” the hardline Braverman said in a statement.

“This serious and dangerous disruption, let alone the vandalism, is not a freedom of expression, nor a human right. It must stop.”

But outside the Aston Martin showroom, 19-year-old pregnant mother Chloe Thomas said she was fighting to protect the next generations of humanity.

“How do I explain to my daughter in the years to come where the animals went, where the culture went, where the beauty went, why there are no bees and why I can’t put food in her tummy?” she said.

Just Stop Oil has stepped up its campaign since the new UK government of Prime Minister Liz Truss vowed to allow new drilling for offshore fossil fuels, to counter a surge in energy prices triggered by Russia’s war in Ukraine.