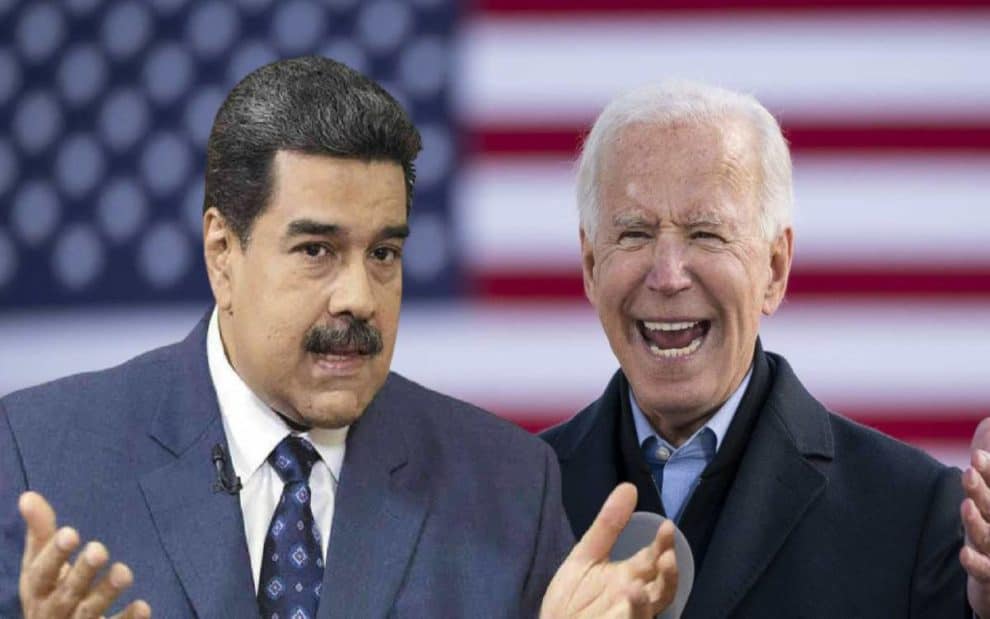 According to a Bloomberg article published last Friday, advisers from Joe Biden’s team are said to be ready to negotiate with President Nicolás Maduro of Venezuela in order to end the serious political and economic crisis in the South American country. The demand that the Venezuelan President resigns is no longer a prerequisite for negotiations, or so it appears. Citing anonymous sources close to the case, Bloomberg claims that Juan Guaidó, an opposition figure that failed to take power in several soft and hard coup attempts, intends “to run a dueling assembly, citing their constitutional mandate to stay in office until there’s a free and fair election.”

Washington has given up on coup attempts against Maduro but will continue efforts to oust him from power.

Even if the self-proclaimed “President” no longer has the support of the U.S and the other 50 countries that recognize him as Venezuela’s leader, it does not mean that American aggression against his government and country will end.

On November 7, Maduro warmly congratulated President-elect Biden, declaring that he was “ready for dialogue and good understanding with the people and the government of the United States”. Maduro highlighted on December 8 that “Donald Trump’s policy on Venezuela had failed miserably. The question remains whether Maduro’s offer to open dialogue will be heard by the new American President.

On July 5, Biden described Maduro’s government as a “corrupt and repressive […] regime” on Twitter. However the president-elect seems to acknowledge the collapse of Trump’s failed policy to remove Maduro from power. Despite Trump’s failure to remove Maduro and install the neoliberal conservative Guaidó, this does not mean that the Democrats want Maduro to remain in power.

This diplomatic turnaround is plausible, especially as Biden will try to distance himself from his predecessor. Maduro is still firmly in power and even the extremely brutal sanctions against Venezuela have failed to make his government capitulate or collapse. This also applies to Guaidó, who not only self-styles himself as Venezuela’s president, but is the former president of the National Assembly. Attempting to establish himself as interim President in January 2019, he was immediately supported by Washington and 50 other Western and regional states.

While Maduro’s allies decisively won the legislative elections on December 6 with 69.32% of the vote, Guaidó gradually cut himself off from the population by the end of 2019, even legitimizing the amplification of sanctions against his country.

Everyone knew, including Trump, that Guaidó strategy had failed as it was basically for the Venezuelan military to abandon Maduro and conduct a coup on his behalf. This spectacularly failed with former National Security Advisor to Trump, John Bolton, saying Guaidó appeared weak like a “kid” while Maduro was “tough.” Bolton even claimed in his book, “In The Room Where It Happened: A White House Memoir”, that Trump viewed Guaidó insultingly as the “Beto O’Rourke of Venezuela”.

Guaidó’s adventures ended in a coup attempt and botched efforts by right-wing mercenary groups and militias. However, neither the U.S. or the EU are admitting this humiliating failure. The Biden administration will maintain pressure against Maduro, but in a softer and less brutal way.

The Bloomberg article mentions Washington’s offer to ease sanctions in agreement with its allies in exchange for the establishment of “free and fair elections”. This is a common mantra used to discredit legitimate elections that do not result in the way Washington expects or demands.

It is recalled that in the 2014 Syrian Presidential elections, Washington deemed Bashar al-Assad’s victory illegitimate despite having a higher voter turnout than any U.S. election in previous decades. The elections were also declared free and legitimate by observers from over 30 countries, including Brazil, India, Uganda and South Africa.

If Biden makes a proposal to end sanctions if Maduro resigns or holds a presidential election on Washington’s terms, then it would effectively be a form of blackmail. If this occurs, then it is obvious that it will be immediately rejected by the Venezuelan government.

Therefore, although Biden may not be as tough against Venezuela for he is going to shift Washington’s attention almost solely against Russia and Eurasia, it does not mean that American aggression against the Caribbean country will end. Sanctions will be maintained, with the only notable difference being that Washington will be more reluctant to sponsor and coordinate new coup attempts against Maduro.