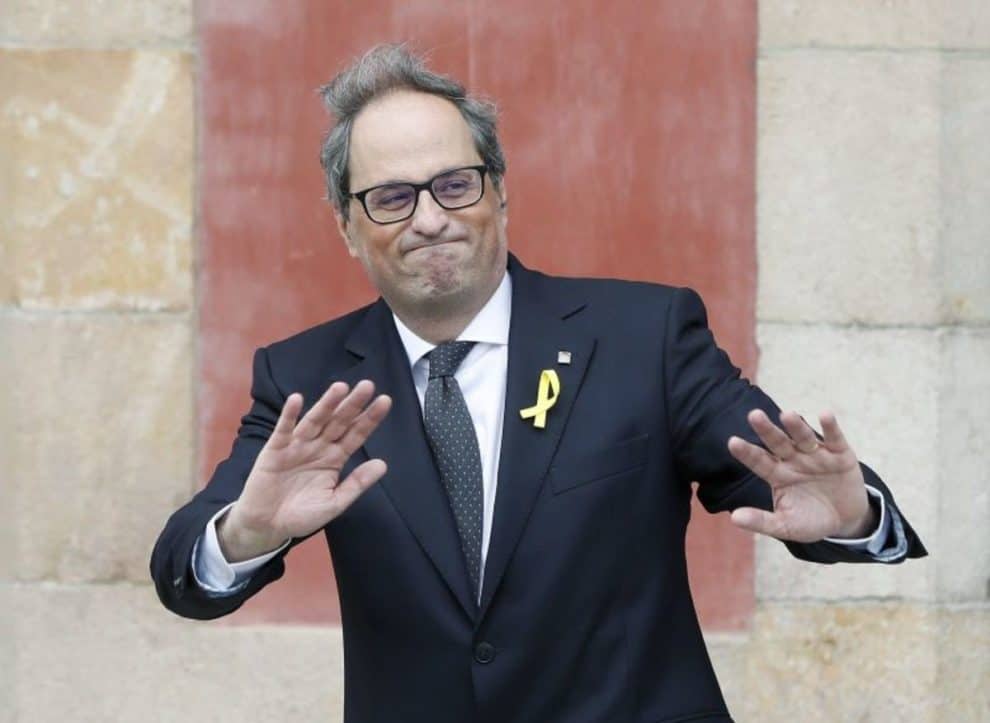 The pro-independence parties of the autonomous region of Catalonia in Eastern Spain still do not know how to respond if their president, Quim Torra, is disqualified by the Supreme Court of Spain next Thursday. Torra faces a likely departure from the Generalitat de Catalunya (Catalonian Autonomous Government) if the Supreme Court of Spain agrees with the ruling made by the High Court of Justice of Catalonia in December 2019 that he should be disqualified for a year and a half for disobedience as he refused to remove pro-independence insignia from public buildings.

“The sentence sets 1 year and six months of special disqualification for elected local, regional, state and European public office,” the court said in a statement at the time.

It would be the first time that a Catalan president has been removed from his post by a judicial decision while he is in active duty. Torra and the Together for Catalonia Party (JxCat), as well as the rest of the pro-independence groups, assume that the decision will go against them.

“I do not expect another decision that is not disqualification,” said the president himself in an interview with Catalan television on August 31.

As the court date approaches, uncertainty grows within the Catalan Executive since its leaders still lack a strategy on a possible scenario in which their president is dismissed. The pro-independence leader ignored several orders from the Central Electoral Board of Spain demanding that he remove “partisan symbolism” from public display prior to the April 2019 Spanish general election.

“I did not comply. In other words, yes, I disobeyed,” Torra admitted during the trial that was held in Barcelona. However, shortly after the conviction he filed an appeal before the Supreme Court to try and challenge it.

His judicial situation also caused the Catalan Parliament, chaired by the independentists of the Republican Left of Catalonia (ERC), to withdraw his status as a deputy. This made a major dent in the JxCat-ERC coalition and encouraged Torra to announce the end of the legislature with no date set for the next Catalan regional elections that must be held by February 4, 2022. Months after the breakdown of the independence consensus, Torra still has not set an electoral date and it is unlikely that he will do so before a decision is made by the Supreme Court. Effectively, the Catalan Government enters unknown territory in the likely case Torra’s disqualification becomes effective.

If the court dealing with the Catalan president ratifies the sentence, the procedure to be followed is outlined in the Law of the Presidency of Catalonia. The document indicates that Vice President Pere Aragonés would automatically become interim president, a position with limited powers that would not allow him to dismiss members of the Executive or call elections. Likewise, the Catalan Government would take office, a situation that could last several months, and should be limited to ordinary activity, without being able to present bills such as the pending Catalan budgets for 2021.

In parallel, a process would be activated for Parliament to appoint a new candidate. However, Torra already asked the pro-independence parties a few days ago not to present his successor. Without a presidential proposal, there remains a legal loophole that would allow the President of Parliament, Roger Torrent, to notify the Chamber of the impossibility of investiture and activate the deadline for the automatic call for elections.

If Torrent opts for this, which was already contemplated by the chamber’s lawyers in January 2018, the eventual elections could be held in early 2021. Faced with the possibility that the Government is limited for a few months, the ERC and the Candidature of the Popular Unity (CUP) continue to insist that Torra must set a date for elections before September 17.

“Arriving at the scene of an eventual disqualified president without having agreed on a strategy is irresponsible,” the Catalan vice president and ERC leader, Oriol Junqueras, said in a recent prison interview.

Junqueras, imprisoned for conducting and instigating the illegal Catalan independence referendum in 2017, said that Torra’s decision to announce elections last January “was not the best” since everything indicates that the elections will take place “one year later,” that is, likely in 2021. Junqueras emphasized that this scenario “weakens the institutions,” as well as “the independence movement and the country.”

The CUP showed concern for this uncertainty and demanded an electoral call with the option of keeping Torra in a “symbolic presidency.”

The Catalan spokeswoman, Meritxell Budó, limited herself to saying at a press conference that it is up to the president to decide the strategy to follow “because it affects him personally and institutionally.”

“At this time as a government we do not have any scenario on the table, we respect that the president is the one who decides,” the spokeswoman said.

Although for now it seems that only Torra knows the future of the Generalitat, Catalan and Spanish-language media suggest that it is a new attempt to prolong the political blockade by former president Carles Puigdemont. The idea is that Puigdemont’s new political party, established only in July, will have more time to gain strength in the face of elections and cut the advantage that recent polls give the Republican Left of Catalonia. Nine days after his appointment with the Supreme Court, Torra continues to ignore the requests from the ERC and the CUP and does not even offer to negotiate them, which will likely bring a period of political chaos for the Catalan independence struggle.