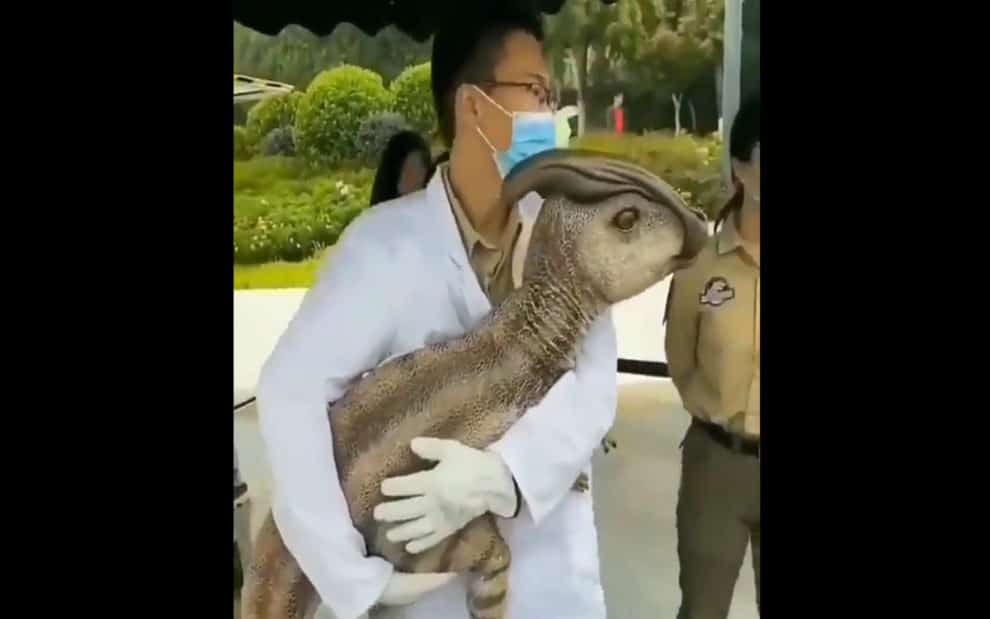 A viral video surfacing online from China shows a Chinese Cloned Dinosaur. As the video went viral, the internet blew up with questions inquiring whether China has actually cloned the first-ever dinosaur?

Is the “Chinese Cloned Dinosaur” real?

The answer to that, unfortunately, is no. Further information revealed that the viral video showed a robot that belongs to the Jurassic Park World Exhibition.

The Exhibition is a popular touring attraction. The visitors go inside the fictional Jurassic World theme park. Using animatronic dinosaurs created by the Australian-based company the Creature Technology Company who had previously created the animatronics for the stage show Walking With Dinosaurs: The Arena Spectacular, the exhibition was first housed at the Melbourne Museum from March 19, 2016, through October 9, 2016. Afterward, it was held at the Franklin Institute from November 25, 2016, through April 23, 2017. Paleontologist Jack Horner, who was a paleontological consultant for the four films, was consulted for the design of the dinosaurs and their film inspired environments.

Is it possible to clone a dinosaur?

Scientists have further cleared the air by stating that it is impossible to clone Dinosaurs since DNA, a crucial ingredient for cloning, does not survive 6 million years. In the 20 years since Steven Spielberg’s benchmark-setting blockbuster was released, advances in science have debunked some of the assumptions made by the filmmakers. And, while it may still be possible, paleontologist David Hone sees no possibility of cloning a dinosaur.

However, there is no consensus regarding this. Researchers in China and the US have found material in a dinosaur fossil that they claim looks like DNA. In a new paper in National Science Review, Alida Bailleul and colleagues report on their discovery of remarkably well-preserved cartilage from a Late Cretaceous dinosaur, Hypacrosaurus, from North America, dated at between 74 million and 80 million years old.

In their paper, Bailleul and colleagues note that they tested within the cells in the cartilage and identified stain responses. But they found no such responses in the general matrix of the bone, or presumably in surrounding sediment. On the other hand, there are no tests in the paper to identify whether the reactive molecules are from a dinosaur or from a microbe. It’s unlikely you could sequence the DNA to find out because its chains would have broken into such tiny fragments

Researchers may be unable to replicate studies that claim to have found dinosaur biomolecules for all sorts of reasons. Schweitzer is quoted as saying that the skeptics “can say what they want”, but they need to come up with other explanations that fit the data better.

While the Chinese Cloned Dinosaur is not real, it would be great if Chinese scientists can work on a coronavirus vaccine. A user tweeted, “It says the Chinese cloned their first dinosaur. Real or fake, I wouldn’t be surprised either way at this point. If there’s a T-Rex on the loose next month or so we’ll know where it came from lol.“