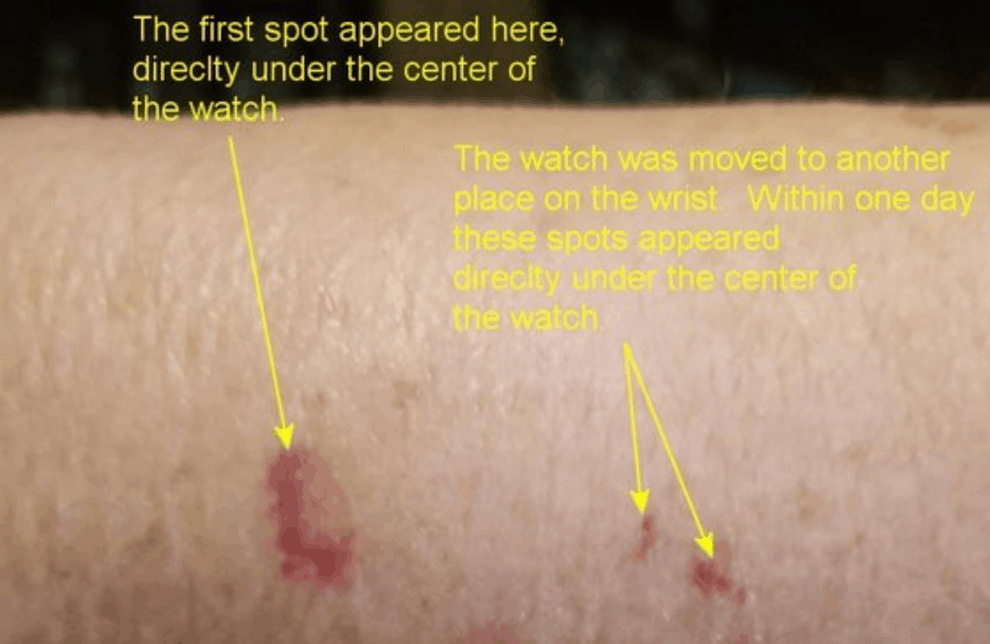 Just a few weeks ago, Samsung launched a new Galaxy Watch 3. We don’t know if the new smartwatch is causing skin rashes, burns, blisters or other dermatological issues. Let’s hope it doesn’t. But we do know – and have reported – that there are hundreds of people who purchased the older Galaxy Watch models only to find that the device causes skin rashes and burns. One affected user has shared with us their experience of how the Galaxy Watch Active 2 caused a red spot on the wrist and how much they had to struggle for a refund.

It’s been more than two years since Samsung launched the first Galaxy Watch, and users have been complaining about the issue for a long time. You would expect the Korean company to have resolved it by now. But the voice of frustrated consumers tells the same old story skin problems.

After noticing the red spot, Paul’s wife moved the smartwatch to another area of her wrist. And a similar red mark appeared under the sensors in the new location. Paul told Insider Paper – and has informed Samsung – that the skin irritation was not due to the band being too tight, overheating, abrasion, dust, dirt, or sweat from excessive workouts. Just wearing the smartwatch caused the red spots.

What made it particularly worrisome for Paul’s wife is that she has had leukemia for about four years. She takes chemo medications. She has had cancer since long before she purchased the device. But considering the device “appears to radiate something that affects her physiology,” she decided not to wear the smartwatch.

Dealing with Samsung to get a refund

Since it had been more than two weeks since the purchased the device, Best Buy declined to take the watch back and issue a refund. On July 29, Paul posted in Samsung’s Community forum apprising the Korean company of his experience.

He just wanted to return the watch and get a full refund. But the Customer Service asked him to send the watch for evaluation. They offered to repair the watch if necessary, and then return it to Paul. No refund.

He also reached out to Samsung via phone. But the issue dragged on for almost two months despite several attempts by Paul to get it resolved at the earliest. After he made numerous calls to Samsung’s Customer Support, they escalated the issue to the Case Management Group.

Later he was assured that he would get a refund rather than a ‘repaired’ smartwatch. Samsung sent him a box to return the watch, and he sent it to the company. The smartwatch had been with Samsung Texas for about two weeks. Whenever he tried to get an update, he was told that he would get a call from the Corporate within 48 hours. But the calls never came.

Finally, just when Paul was sharing his ordeal with Insider Paper, he got a call from Samsung’s office in Plano, Texas that the company would process his refund. They required him to send a copy of the original receipt.

Samsung finally agreed to issue a refund after more than two months of persistent calls from the affected customer. I have two questions. 1) Why the hell hasn’t Samsung fixed an issue that customers have been complaining about for a long time? 2) Why make the customer go through hell to get a refund?