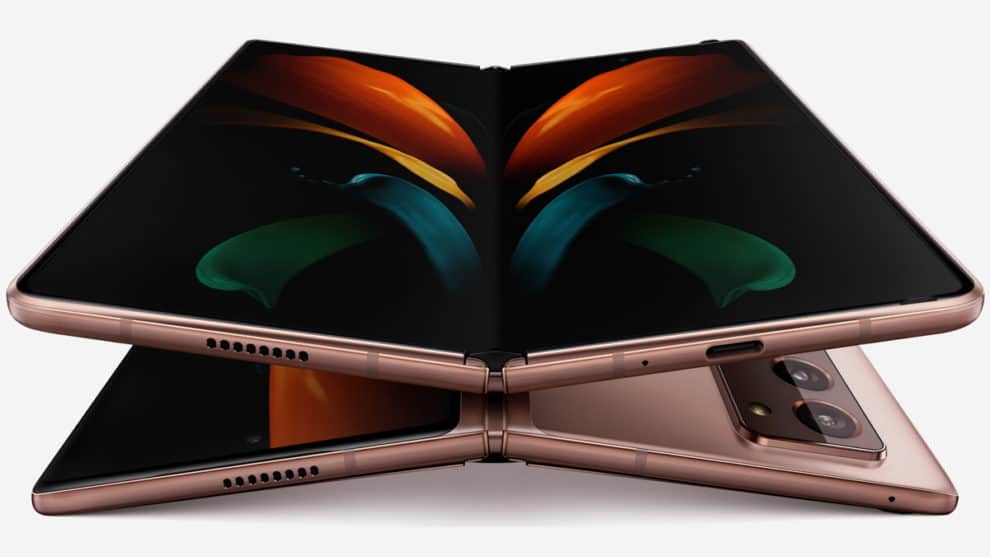 UPDATE September 1: Samsung today has released the official price of the Galaxy Z Fold 2 and pre-orders will start Wednesday, September 2nd. The Galaxy Fold Z 2 will be priced at $1,999, the official release is scheduled on September 18. While many Samsung fans have expressed disappointment at the costly price, Samsung has announced that the step us “fashion” model will be pricier than this. The Thom Browne Fashion edition will be priced at $3,299, the pre-order facility for this edition is not available yet.

Samsung released an official statement stating that the Thom Browne edition will feature “its shared ethos to provide a deeper level of hardware and software integration. The geometric grey and signature multi-color stripe is complemented by a grosgrain pattern, creating a visual texture of the fabric on Galaxy Z Fold 2’s unique design.”

The Galaxy Fold Z 2 was initially announced on August 5 as part of Samsung’s “Unpacked” events. However, Samsung did not disclose the price then. The new phone will feature impressive specs, the Galaxy Fold Z 2 will have a 6.2-inch premium screen. When the phone is unfolded, it will extend up to 7.6 inches in length. This is slightly larger than the previous edition which extended up to 7.3 inches

The phone will be worth every penny

In this new phone, Samsung has gone over and beyond to include some functionality changes that enhance the overall quality of the phone. In the original Fold, only two apps could function at the same time on both sides of the phone. The new Galaxy Fold Z 2 will allow the users to simultaneously open three applications.

The original date for the Galaxy Z Fold 2 release was delayed after units were sent to the press and were discovered to be not up to the mark. In response, Samsung employed its team to retool the phone. In a press briefing, Samsung executives stated that new materials were incorporated for the new editions so that it will be much more solid when not folded. The phone will feature what has been termed as Samsung as “sweeper technology … within the gap between the body and hinge, housing to repel dust and dirt particles.”

To make the new Galaxy Fold Z 2 phone more affordable, some substantial discounts are being offered depending on where you buy the phone. On Samsung.com, users will be able to exchange their old phones and relieve up to $650 in return. (this amount may also extend up to $850 if you own an original Galaxy Fold or Galaxy Z Flip). The brand new phone will be available for pre-order tonight.

On August 5, at the Unpacked event, Samsung was able to unveil its new hardware products, including Samsung Galaxy Z Fold 2, Galaxy Note 20, and Galaxy Tab S7. However, the company didn’t mention the exact release date of the foldable device. It only promised to give more information regarding it on September 1. Although we are still a few days away from the second official announcement, it looks like the price of Galaxy Z Fold 2 is now available, all thanks to Samsung.

The price of the new Samsung Galaxy Z Fold 2 was spotted on Samsung’s UK retail website, it seems potential buyers can now start pre-ordering for the device. However, Samsung has now removed the price tag, which many readers were able to capture in a screenshot before the removal process.

According to the latest report, the new Samsung Galaxy Z Fold 2 will sell at a starting price of £1,799. By conversion, that’s roughly about USD $2,386. Well, that’ll definitely not be the selling price in the US. The reason for that is because there are regional pricing differences in the market of the two countries. So, looking at the leaked Samsung Galaxy Z Fold 2 price and comparing it with last year’s Samsung Galaxy Fold, which cost £1,799 you’ll notice a difference of £100. Although the phone is still expensive, it’s exciting to see it come cheaper than the original Galaxy Fold. As for the starting price in the US, we’ll also likely see a price drop of $100. With that, it means the price will likely be $1899, instead of $1,980.

Here’s the screenshot showing the price of the new foldable device below: 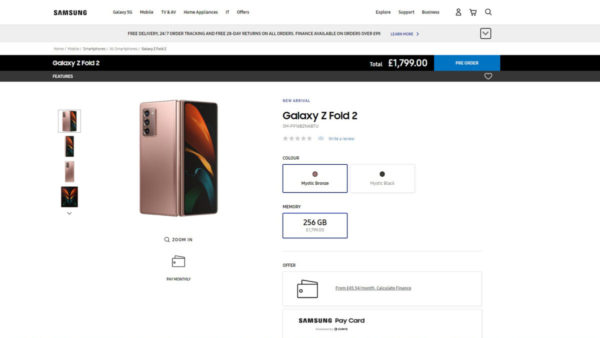 Apart from the price of the Galaxy Z Fold 2, the listing also reveals that the foldable device will only have one storage capacity, which is 256GB. in addition to that, the smartphone will come in two colors, Mystic Bronze and Mystic Black, which we already have an idea of before now.

For now, that’s everything we know about the Galaxy Z Fold 2 price and features. However, we’ll be able to get full details regarding the foldable device on September 1.

According to the information on the Samsung Newsroom site, the Unpacked event part 2 will hold virtually on September 1, at 10 am ET (7:30 pm IST). Furthermore, the report also reveals the purpose of the event. And that is to “explore in-depth the groundbreaking features” of the Galaxy Z Fold 2. Also, the event will be available on Samsung’s US Newsroom and the company’s official website.