In one of our posts, we reported how Google Pixel Buds users were expressing their concerns on some particular audio issues, including hissing and static sound problems. If you can remember, Google rolled out a survey during that time, which enabled users to share their experiences so far while using the devices.

After the survey, the company gave workarounds and offered replacements to some of its customers. However, none of them was able to work as a fix for the audio issues. Now, we heard that Google has quickly released an update, v296 firmware, and making it available to Pixel Buds users via OTA, to help them fix the annoying hissing and static sound issues they are experiencing.

According to reports, the just-released v296 firmware update, which was supposed to help fix the hissing and static sound issues for Google Pixel Buds users, has proved ineffective. That’s because most users have taken to social media, including the official support page, to complain that the audio issues still persist, even after receiving the firmware update.

Let’s have a quick look at some of the Google Pixel Buds users’ complaints as to the hissing and static sound issues below:

According to Jason Wright, he still experiences the hissing and static sound issues on his Google Pixel Buds. Here’s what he posted on the official support page:

“Also updated to firmware 296. No noticeable improvement. It still has the same static as before. My guess is that there is insufficient shielding from the power supply, and there is nothing that firmware can do about it. It’s what happens when you cram a battery, power supply, Bluetooth radio, and touch controls into a tiny device with a speaker.”

“Updated to 296. No perceivable difference. And it’s just the right bud. If I put my left Bud in my right ear, I can’t hear it buzzing — if I put my right bud in my left ear, it’s just as audible. And I definitely don’t have great hearing. I grew up around and worked on farm equipment without hearing protection, and still, it’s fairly loud. I don’t have to concentrate to hear it…” 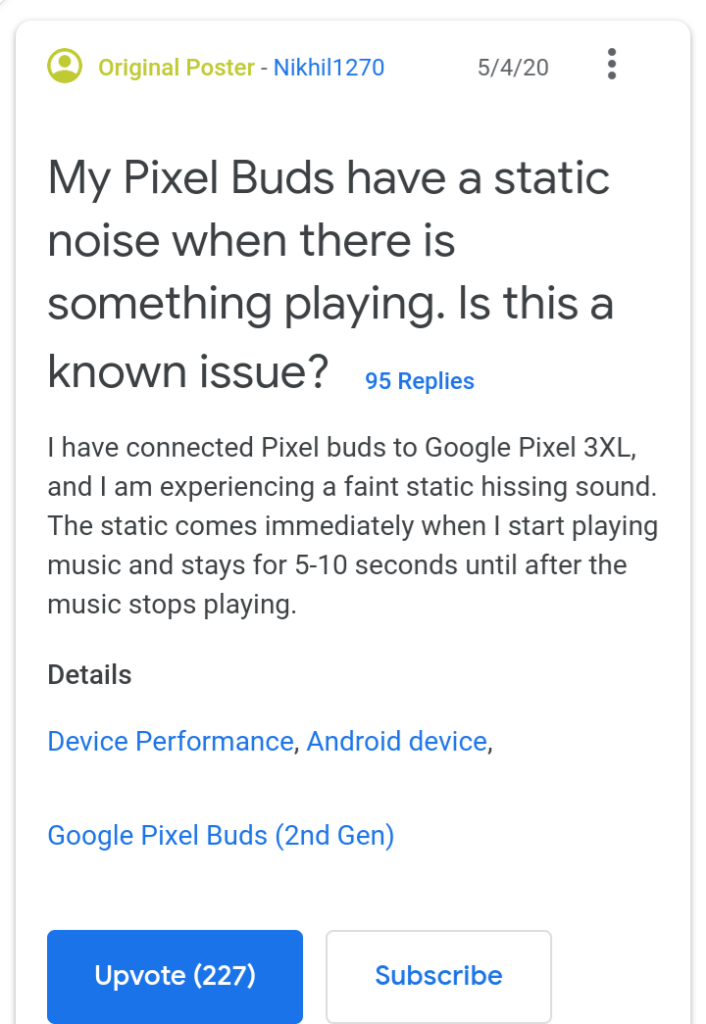 Is Google Aware Of The Problem And Any Fix Yet?

To the question of whether or not Google is aware of the problem, I’ll say yes.

According to one of the product experts, they are already taking feedback, as v296 firmware update didn’t work in fixing the hissing and static sound issues for most Google Pixel Buds users.

“Please continue to send feedback to let the developers know that you’re still hearing the static hiss on 296. I’ll also see if I can get any other guidance, says the expert.”

It’s still unclear how quickly Google will come up with another firmware update, to fix the audio issues for Pixel Buds users. However, I’m pretty sure they are already working on it.

We’ll keep an eye on any development from Google for you. And as soon as we see anything worth sharing, we’ll certainly let you know about it.