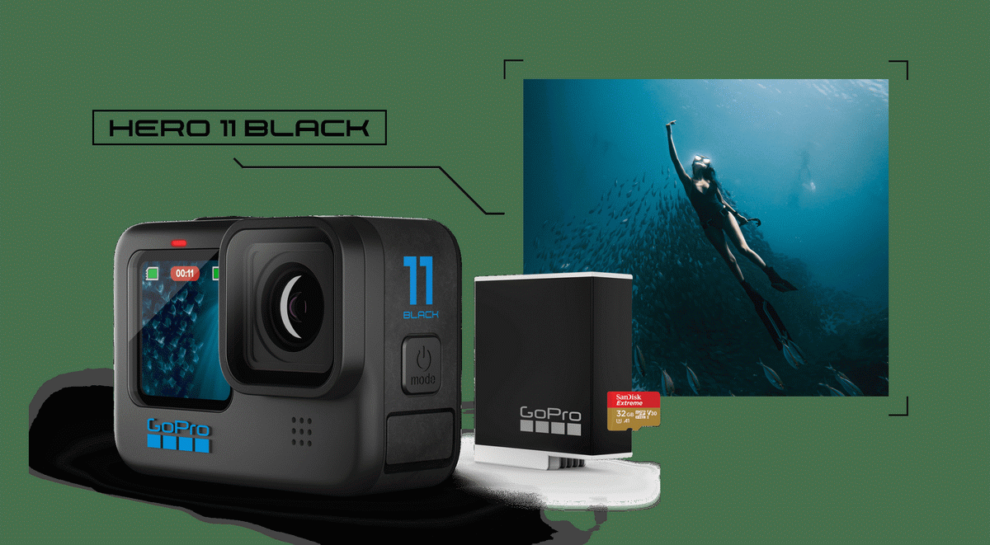 All three models come with a bigger sensor, more versatility, and maximum performance. Fans of the GoPro cameras awaited the launch for months and are now excited to try the devices for their filmmaking needs.

Let us take a look at the detailed features of the new cameras and how they differ from their predecessor.

Go Pro has made the realm of possibilities even bigger with its new devices. There will be no restriction on the creative expression of filmmakers and anyone who wants to achieve something groundbreaking with their videos. The sky is the limit here, literally!

All three versions have an advanced 1/1.9-inch sensor adept at recording video in 10-bit color depth and up to 5.3K resolution at 60 frames per second. The sensor allows 8:7 aspect ratio video footage. The new models are capable of filming videos with a more vertical field of view coverage. This is a huge leap from the earlier GoPro models.

The sensor also provides a 360-degree horizon lock up to cinematic 5.3K resolution. It is great to prevent lop-sided videos or used for giving an even better feel to an activity that involves spinning. For example, you can keep the subject level intact and spin the sky. The Time Lapse is upgraded with some great tools for night owls. Star Trails, Vehicle Lights, and Light Paint are some of the effects you can use from GoPro presets.

The advanced sensor also allows ‘HyperView’, using on-board intelligence to give a wide-angle 16:9 field-of-view. The maximum resolution can go to 5K/60 with a full frame. It’s similar to the existing Superview feature but with the addition of pixels. The result is an amazing ultra-immersive video perfect for point-of-view or first person shots. It is great for filming yourself while doing something adventurous like biking, surfing, skiing, motorcycling, and similar activities.

GoPro Hero 11 also raises the standard for in-camera video stabilization with HyperSmooth 5.0. It gives unbelievably smooth footage no matter how rough your movements are. The AutoBoost feature automatically sets the level of video stabilization needed. The stabilization is determined based on your speed and movement to deliver the widest and smoothest shots.

The GoPro Hero 11 Black houses  “Enduro” batteries, that charge faster and give a longer battery life. Compared to the standard batteries of the Hero 10 model, this is more efficient. These batteries can improve camera performance and works in greater temperature ranges. So whether it’s freezing outside or melting, your battery will work just fine.

There are no big changes in design except for the different model numbers on the side. The colors are also similar to the predecessor. The biggest hardware change is the taller sensor. The new camera houses the Enduro battery as standard which was earlier sold as an accessory.

One of the best and most-awaited features is the automatic highlight videos. The idea behind the feature is to auto-upload your new video footage as soon as you are back from shooting. It also creates short highlight videos. The auto-upload is not exclusively a GoPro 11 feature. It’s available to users of the camera back to the Hero 5 as long as they had a subscription.

The jump from 23 to 27-megapixel photos and 10-bit color is a great improvement. Filmmakers can combine different videos at different aspect ratios – that too in full resolution. It’s best to say that the GoPro Hero 11 gives far greater options to content creators than Hero 10.

Hero 11 Black and Hero 11 Black Creator Edition will be available starting this Wednesday. However, fans will have to wait another month for the compact version. The Mini camera will roll out on October 25th for GoPro subscribers, and be available for retail soon after.

The pricing scheme is the same as users pay less if they choose to subscribe. However, subscribers should make sure to keep reviewing their subscription plans.

Now we know that there are three versions of the newly launched Hero 11 Black camera series. So let’s find out the specifics of all these models.

The Creator Edition is technically a Hero11 Black camera with Volta Battery Grip, Media Mod, and Light Mod. It includes a long-lasting battery grip with built-in buttons for one-handed camera control and lasts four hours of 4K recording per charge.

The GoPro Hero 11 Black Mini is the less pricey version that has got fans excited. It is similar to the GoPro Sessions in the earlier models. The mini is a compact action camera that is not equipped with the touch and front-facing screens of the main device. It is mainly controlled through GoPro’s Quik app.

The mini version has a small display alongside the record button. The display allows checking which resolution and frame rate a person is shooting at and the remaining record time and battery level. It also houses most of the Hero 11’s specs in a compact space. After a future software update, it can be used with the max lens mod. The camera is a lot more flexible to mount and you can attach it to different angles.

The Mini is quite similar to the regular Hero model in terms of recording video. It also has the same sensor and custom GP2 processor, the same 10-bit recording, and supports almost all the same resolution and frame rate combinations. The upgraded features like HyperSmooth 5.0 system are all part of the Mini version too.

All three versions are equipped with the latest technology to give content creators greater control over their devices. You can take stunning videos with these GoPro 11 action cameras and explore new opportunities in filmmaking.