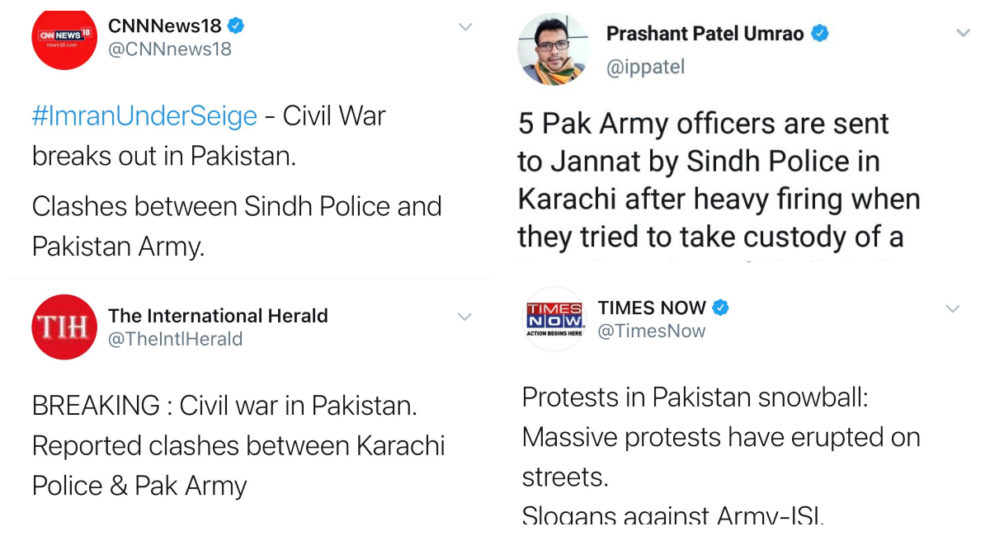 In the past week, the province of Sindh has witnessed political turmoil and instability on a massive scale. On 19th October, the leader of Pakistan Muslim League-Nawaz, Captain Muhammad Safdar Awan, was arrested for sloganeering at Quaid’s mausoleum. An FIR was registered against him under sections 6, 8, and 10 of the Quaid-e-Azam’s Mazar Protection & Maintenance Ordinance 1971.

Citizens of Pakistan hold Quaid-e-Azam in high respect, and sloganeering at his mausoleum was interpreted as a sign of disrespect. Captain Safdar was taken into custody for chanting “vote ko izzat do (honor the vote).” Several people resorted to Twitter and demanded that the Sindh Police take action. Shafqat Mehmood, the Federal Minister for education, tweeted, “Quaid e Azam Mazar administration has complained about the concerned police station for registration of an FIR against all those who violated the sanctity of this national monument. IG Sindh should ensure that legal action is taken.”

The arrest of Captain Safdar stirred further conspiracy, the incident was twisted and used by Indian media to broadcast fake news. The wife of Captain Safdar and prominent member of the Pakistan Muslim League-Nawaz, Maryam Nawaz, wrote in a tweet that Captain Safdar was arrested from the hotel they stayed in at Karachi. She tweeted that Police broke the door of their hotel room and dragged out Captain Safdar. She tweeted, “Police broke my room door at the hotel I was staying at in Karachi and arrested Capt. Safdar”. She further added, “I was in the room, sleeping when they barged in.”

The violent manner in which Captain Safdar was arrested further increased tensions in the country. Bilawal Bhutto Zardari, the Chairperson for Pakistan People’s Party, publicly condemned the arrest. He emphasized that the manner of arrest was completely in violation of traditions in Sindh. He pledged full support and solidarity to Maryam Nawaz. Bilawal Bhutto reassured Maryam Nawaz that he had asked the Sindh Chief Minister to investigate the matter. He also assured her that all possible steps would be taken to secure her husband’s release.

The Pakistan People’s Party Minister, Saeed Ghani, alleged that the Sindh government played no role in the arrest. There were reports that the Sindh government had been forced by rangers to carry out the arrest. This piece of information was misused by Indian media to portray that the army had taken over Pakistan. An Indian media outlet tweeted, “Army takes over all Karachi Police stations”. Minhaz Merchant, an independent journalist from Indian tweeted, “Pak army takes over Karachi’s police stations as clashes break out between police & army in Sindh following bomb attack that kills 5. Casualties could mount amid civil strife against PM @ImranKhanPTI.”

Just a day after Captain Mohammad Safdar was arrested and subsequently released on bail in Karachi, several police officials applied for leave to “come out of […] shock” caused by the “recent episode of registration of FIR against Capt (R) Safdar.” This leave application was filed at least two additional inspectors general, approximately seven deputy inspectors general, six senior superintendents, in addition to three station house officers of Sindh Police.

A prominent journalist praised the Sindh Police by tweeting, “honorable men who care about integrity and understand the real meaning of dignity do the honorable thing. Sindh police top core shows how to do this.”

The acclaimed lawyer and activist, Jibran Nasir critiqued the federal and Sindh governments, operated by PTI and PPP respectively, for “making police carry their burden”. He tweeted, “7 DIGs, 1 AIG & 2 SSPs apply leave stating Police high command was ridiculed and mishandled in Capt Safdar case leading to Police being demoralized and shocked”. PTI and PPP Govts making Police carry their burden. Out of fear of one institution, all others are being destroyed.

The tweet that fueled fake news by Indian media houses was tweeted by Asad Ali Toor, an acclaimed journalist. He tweeted, “Why Sindh Police officers are refusing to discharge their duties. Who kidnapped IG Sindh? Who pressurize(d) police officials to register FIR and raid the room of Maryam Nawaz? Who violated [their] oath?” The cherry on top of the political instability in Karachi was an explosion near the Gulshan-i-Iqbal building. The explosion left 5 dead and more than 20 injured. While the actual cause of the explosion was gas leakage, the Indian media outlets reported a “bomb blast” and linked it to the political turmoil in the country.

A popular media outlet in Indian reported the situation as the Civil War breaks out in Pakistan. “Clashes between Sindh Police and Pakistan Army. The chorus for Imran Khan’s ouster grows. The massive explosion in Karachi kills 5.” Another prominent media outlet tweeted, “3 dead, 15 injured in Karachi blast as ‘civil war’ like situation emerges in Pakistan.” The fake news was intended to spread mass hysteria regarding the situation in Karachi. This is not the first time Indian media has twisted facts to tarnish Pakistan’s repute in the international world.

The citizens of Karachi found the news of a civil war hilarious, one user tweeted, “Karachi civil war has gotten so bad that my food panda delivery boy had to crawl through mine fields carrying his AK47, RPG & 9mm along with my nihari and Biryani. This thing is getting so serious. Multiple cows have been killed & people are dying of over eating.”