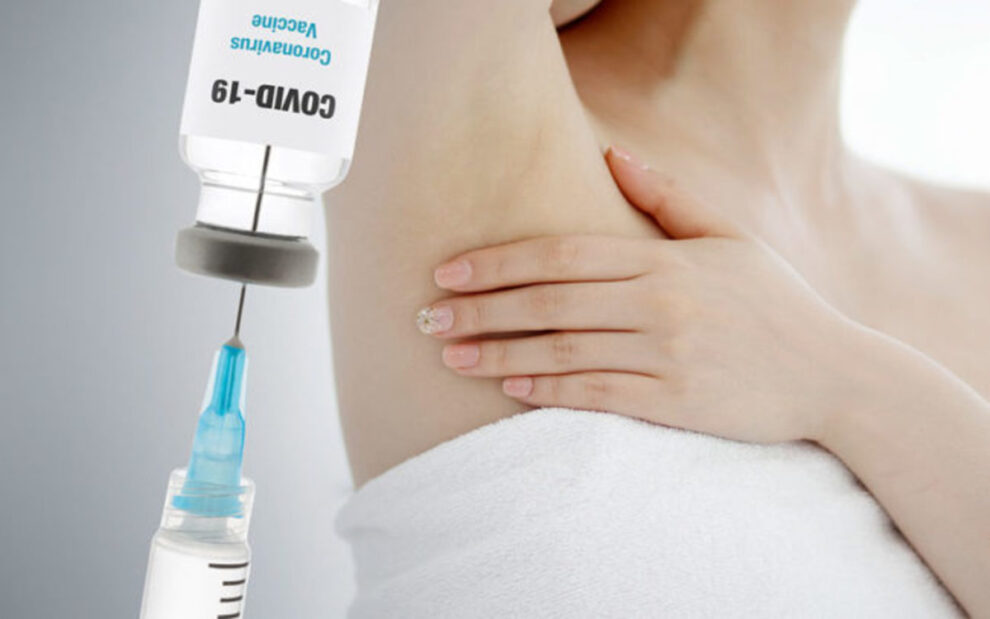 Radiologists are observing a potential consequence of the COVID-19 vaccine across the country, swelling in lymph nodes under the armpit that is showing up on mammograms.

As vaccines are released across the country, doctors are noting more and more of these swollen nodes in recently vaccinated people.  Medical journals have started publishing reports focused on easing fears and helping patients avoid unnecessary testing for a harmless condition that will disappear in a few weeks.

The swelling is a common reaction by the immune system to the vaccine and appears on the same side as the arm where the shot was given. It can also happen after other vaccinations, such as flu and the human papillomavirus (HPV). Patients may or may not observe it. But the enlarged lymph nodes appear as white blobs on mammograms and chest scans, similar to images that can point out the spread of cancer from a tumor in the breast or anywhere else in the body.

“I am particularly eager to get the word out to all the patients undergoing surveillance after successful prior treatment of cancer,” said Dr. Constance D. Lehman, the chief of breast imaging at the Massachusetts General Hospital. “I can’t imagine the anxiety of getting the scan and hearing, ‘We found a node that is large. We don’t think it’s cancer but can’t tell,’ or worse, ‘We think it might be cancer.’”

Radiologists say the real rate may be higher

The swelling in the armpit was a known after-effect in the large trials of the Moderna and Pfizer-BioNTech vaccines. In Moderna’s study, 11.6 percent of patients reported swollen lymph nodes after the first jab, and 16 percent after the second dose. Pfizer-BioNTech had 0.3 percent of patients reporting it. But radiologists say that the real figure might be higher as many cases can appear on mammograms, M.R.I.s, or CT scans.

Dr. Lehman believed it was mandatory for imaging centers to ask patients if they have had the Covid vaccine and to note down the date of the shot and the arm in which it was injected.

One way people could prevent the issue would be to defer routine mammograms and other imaging for at least six weeks after the last dose of vaccine, according to an article in the journal Radiology.

But the expert panel also advised that nonroutine imaging and immunization should not be postponed.

According to Dr. Lehman, in recent immunized people who have cancer and develop enlarged lymph nodes, it may be crucial to carry out more tests and biopsy of the nodes.

A woman having cancer previously in her right breast had a routine mammogram that indicated an enlarged lymph node in her left armpit. She’d recently got a Covid vaccination in the left arm. Doctors advised no more tests unless the swollen nodes stayed more than six weeks.

Dr. Lehman said the Covid shot should be given in the arm on the other side for patients getting treated for cancer in one breast. The vaccine can also be injected into the thigh to avoid any problems with lymph node swelling.

“This could really impact a lot of people if we don’t start recording vaccination status immediately at imaging centers,” Dr. Lehman said. “I also want cancer patients to know they can get the vaccine on the opposite side or even the leg to avoid confusion.”