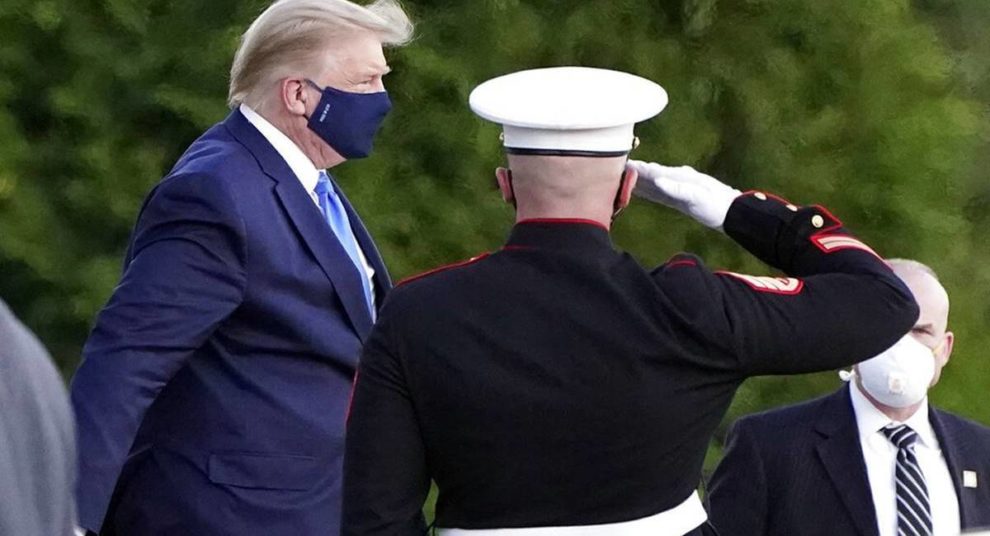 US President Donald Trump will need all the points he can score in the run-up to next month’s presidential elections where he will face off against Democrat candidate Joe Biden. Events such as war or threats to a national leader have a psychological effect on a populace and unites people. It is still not clear at the moment whether voters sympathize with Trump after it was announced on October 2 that he and First Lady Melania Trump had contracted COVID-19. However, any person’s illness naturally invokes a certain level of sympathy, even when we completely disagree with them politically.

Despite two weeks of necessary quarantine, it is unlikely that this will weaken Trump’s re-election campaign. It is well known that he is an avid Twitter user. We can expect him to not only write more on Twitter, but also increase his appearances on television. In addition, the president can increase livestream speeches as he did in the spring when domestic travel was restricted because of COVID-19.

The latest survey by “John Zogby Strategies/EMI Research Solutions” showed that Biden “holds on to a two-point lead over President Donald Trump, 49% to 47% with 4% not sure,” which is the Democrat candidate’s smallest advantage in the polls so far. The research also shows that the chances for Trump’s re-election as head of the White House has increased.

This is a sign that Trump’s infection and noisy performance in the first debate with Biden did not harm his chances for re-election. The research challenged the media narrative that Biden had strengthened his leadership over Trump. 47%, according to the John Zogby data, is actually one point higher than the percentage of votes he received in 2016 (46.1%).

According to John Zogby, Trump “appears to have consolidated his base of Whites, parents, conservatives, men, and his own party’s voters. Joe Biden looks as if he is on his way to doing the same with his base. His numbers among Hispanics are respectable but not quite at the 66%-67% he really needs. The same with Blacks. His 86% is better than our last poll but he needs to hit 90%.”

With this, Biden is likely to continue his campaign as planned. Trump’s infection still has not managed to fully distract Americans from the first debate that was mired and criticized for its rude nature. However, even after the debate, the results show that Trump is certainly gaining on Biden. The Democrat candidate had a solid advantage in the past two polls, showing that the race is intensifying. In the poll conducted on July 8, Biden led Trump with 49% to 42%, and in the last poll, published on August 29, Biden had an advantage of 6 points, 48% against 42%.

Yesterday, Trump made a tweet that created controversy, saying:

“Don’t be afraid of Covid. Don’t let it dominate your life. We have developed, under the Trump Administration, some really great drugs & knowledge. I feel better than I did 20 years ago!”

Many social media users were quick to highlight that there are about 7.5 million total infections in the US that has resulted in over 210,000 deaths because of his continuous lacklustre response to the pandemic. Yet, despite social media outrage, it must be remembered that platforms like Twitter only represent a small segment of the voting population.

CNN claims that such tweets “plays right into Biden’s strategy of offering the nation a calm, sensible and presidential alternative by simply acknowledging reality.” However, this has not been reflected in the polls as Trump continues to gain on Biden, showing that just as in 2016, there is a huge divide between the reality of voter feelings and mainstream media claims.

As said before, it is natural for humans to sympathize with those who are sick. Trump has presented himself with a strong and decisive image in the face of the deadly disease, especially given the American president’s age (74) and obesity (110.7kg), which puts him in a high-risk range. By continuing to campaign, albeit via untraditional methods, does not only keep Trump in the race against Biden, but has actually strengthened his position by hitting sympathy cords with swing voters and presenting a strong image to his voter base.