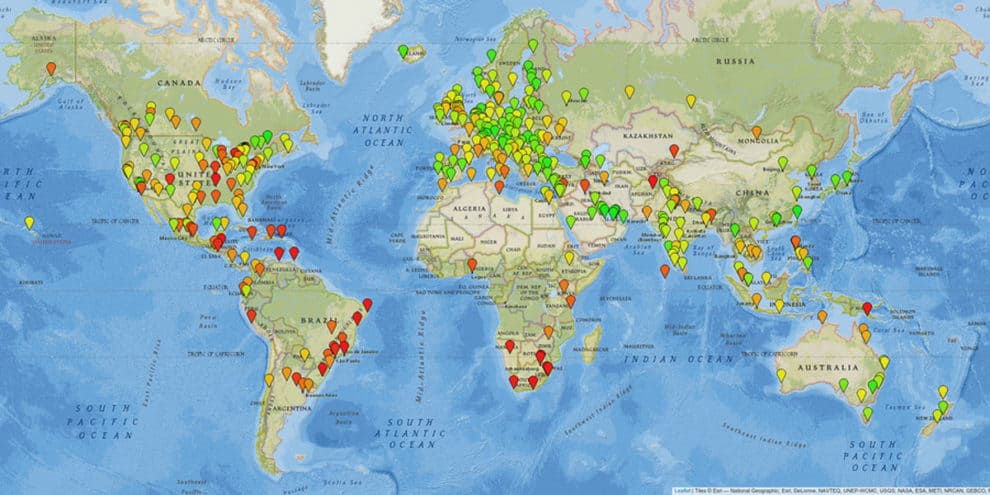 Unarguably, the world is full of beautiful and safe places, for people to travel and have a once in a lifetime experience. However, the same world also has countries that can be very dangerous to visit. As such, it’s advisable for travelers to conduct thorough research and get some facts about the country they have an interest in visiting. One of the things to consider before traveling to a particular city or country is the crime rate. Most times, a country’s crime rate for a particular year is calculated by dividing the total number of reported crimes by its population, with the result multiplied by 100,000. Furthermore, several factors contribute to why people commit crimes in a country. However, the major factors are high poverty and unemployment rate. That said, here’s the list of top 10 countries with the highest crime rate in 2020, as compiled by Numbeo.

List Of Top 10 Countries With Highest Crime Rate in 2020

Venezuela sits on the first position on the list of top 10 countries with the highest crime rate. That’s because the country currently has a total of 84.36 crime index, which is the highest so far. As such, the US Department of State has indicated, with a Level 4 travel advisory, that the country isn’t safe to visit and people should avoid traveling there. In case you have a strong reason to visit, it’s worth noting that, not many people can be trusted. That also includes the police, security personnel at airport screenings, and border crossings. According to research, Caracas is the most dangerous place, especially at night. Apart from that, the country’s border with Columbia is also one of the riskiest places.

Papua New Guinea sits on the second position on the list of top 10 countries with the highest crime rate in 2020. Currently, the country has a total crime index of 80.04, making it to occupy the position. According to reports, there are a lot of violent crimes in Papua New Guinea, including carjackings, rapes, armed robberies, kidnapping, and home invasions. In case you have any reason to travel to the country, avoid places like the Panguna mine in Bougainville and the Highlands region because of civil unrest.

With a crime index of 77.29, South Africa is currently the third on the list of top 10 countries with the highest crime rate in the world. The common crimes in the country include assaults, rapes, homicides, and murder. Well, there are several factors that contribute to the high crime in the country. Some of them include high unemployment levels, social exclusion, and high poverty rates. Furthermore, according to a recent study, South Africa has the highest rape rates, with a total of 132.4 incidents per 100,000 citizens.

Afghanistan has a total crime index of 76.97, making it the fourth-highest crime rate country in the world. Some of the crimes in the country include drug trafficking, kidnapping, money laundering, murder, and corruption. All of these and many more contributed to why the US Department of State indicated, with a Level 4 travel advisory, that the country isn’t safe to visit.

With a crime index of 76.65, Honduras sits on the fifth position of the list of top 10 countries with the highest crime rate in the world in 2020. In 2012 alone, the country recorded up to 20 homicides daily. Although that has reduced significantly, the country is still known for other crimes like drug trafficking, money laundering, and gang activities.

Trinidad & Tobago has a crime index of 72.43, making it one of the top 10 countries with the highest crime rate. Some of the risky places to visit in the country are Sea Lots, Laventille, Beetham, Cocorite, and the interior of Queen’s Park Savannah in Port of Spain. Those areas are known for several violent crimes, including sexual assault, assault, home invasion, kidnapping, terrorism, drug trafficking, murder, and robbery.

With a crime index of 68.31, Brazil is the seventh-highest crime rate country in the world in 2020. It’s advisable that you apply sense when visiting Brazil, especially places like Santa Maria, Sao Sebastiao, and Paranoa. That’s because of the country’s high crime rates, including gang activities, assaults, murder, armed robbery, and carjacking.

Guyana sits on the eighth position on the list of top 10 countries with the highest crime rate in 2020. That’s because of its crime index of 68.15. With a level 4 travel advisory by the US Department of State, it’s advisable that you exercise increased caution while visiting the country. Some of the common crimes in Guyana include armed robbery and murder. However, to enjoy your stay in the country, ensure you avoid driving or walking at late hours. Also, avoid wearing expensive watches and jewelry, and be aware of your environment.

With a crime index of 67.84, El Salvador is currently the ninth-highest crime rate country in the world. Violent crimes in the country include assault, rape, armed robbery, murder, and gang activity. However, to have a smooth travel experience visiting El Salvador, all you need is to apply sense. First, it’s advisable that you are extra careful while visiting ATMs. Apart from that, avoid walking and driving in the night. Also, be aware of your environment.

Syria sits on the last position on this list, with a current crime index of 67.42. However, this is mainly because of the military conflict in the country. Other crimes in Syria include airstrikes, terrorism, murder, kidnapping, and civil unrest. There’s hardly a part of Syria that is safe to visit at the moment. As such, it’s advisable that you avoid visiting the country by all means. However, in case you have to visit, ensure you have a better communication plan in place with your family.