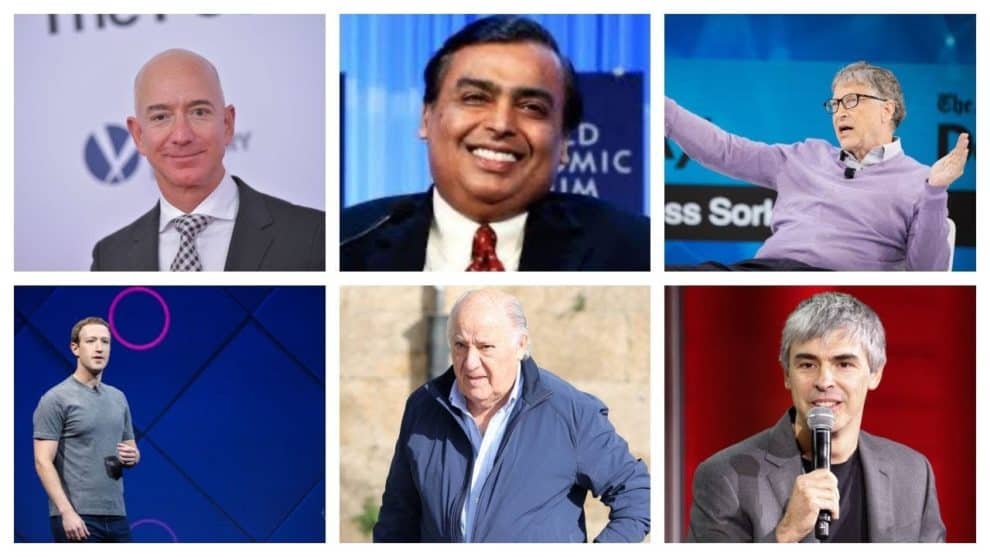 The coronavirus pandemic has so far affected a lot of countries in the world. Even most of the richest people in the world are also affected by the global pandemic. With America and Europe being mostly affected by the deadly virus, the effect had a great hit on the global equity markets, causing a lot of people to lose some of their fortunes. In this article, we’ll be showing you the top 10 richest people in the world 2020, according to the latest Bloomberg Billionaires Index.

Elon R. Musk is the chief executive officer of Tesla Motors, a Palo Alto, California-based company that manufactures electric vehicles. The company, which is the largest automotive employer in the state, sells different vehicles, including Sedans and Sport utility vehicles.

Apart from that, Elon R. Musk is also the chief executive officer of Space Exploration Technologies Corp. (SpaceX), an American rocket company, founded in 2002. The goal of the company is to help reduce the space transportation cost, enabling the colonization of the mars.

With a total estimated value of $68.6 billion, Musk sits on the tenth position on the list of top 10 richest people in the world 2020.

Sergey Brin is a co-founder of Alphabet, a Mountain View, California-based company that owns Google. The company was established in 1998, handles up to 1 trillion searches annually, and generated about $162 billion, last year alone. The company also has different brand divisions, including YouTube, Android, and Gmail.

In December 2019, Sergey Brin stepped down as the President of Alphabet. However, he still remains a board member and a controlling shareholder of the company. According to the latest report, Brin is now funding a high-tech airship project.

With an estimated value of $69.4 billion, Brin is currently on the ninth position on the list of top 10 richest people in the world 2020.

Warren Buffett, also known as the “Oracle of Omaha”, is the chairman and largest shareholder of Berkshire Hathaway. The Omaha, Nebraska-based company owns several other companies, including GEICO, Duracell, Dairy Queen, BNSF, Lubrizol, Fruit of the Loom, Helzberg Diamonds, and many more. It also has stakes in other companies, including American Express and Coca-Cola.

As the son of a U.S. congressman, Warren Buffett started buying stocks at the age of 13. Buffett is a generous billionaire, as he has so far donated to charity organizations, $41 billion out of his wealth. Even at that, he has a total estimated value of $69.7 billion and sits on the eighth position on the list of top 10 richest people in the world 2020.

Larry Page is a co-founder of Alphabet, a Mountain View, California-based company that he and Sergey Brin established in 1998. With help from Brin, Page was able to invent Google’s PageRank algorithm, a process that powers the search engine. In 2015, Page became the CEO of Alphabet but stepped down in December 2019. For now, he remains a controlling shareholder and board member of the giant company.

Currently, Larry Page is now funding a few “flying-car” startups, including Opener and Kitty Hawk. Talking of his wealth, he has an estimated value of $71.6 billion and sits on the seventh position on the list of top 10 richest people in the world 2020.

Mukesh Ambani is India’s richest man and the chairman of the oil and gas giant company, Reliance Industries Ltd. The company was founded in 1966, by his father Dhirubhai Ambani, as a small textile manufacturer.

The Mumbai-based billionaire owns 42% of Reliance Industries Ltd and has a few other businesses, including 4G phone service Jio, across India. By offering different services, including dirt-cheap data services and free domestic voice calls, Jio has been able to attract more than 340 million customers across India.

Talking of Ambani’s wealth, he owns a residential property worth about $400 million and has a total estimated value of $72.4 billion. With that, he’s currently the world’s sixth-richest person in 2020.

Steve Ballmer is the former CEO of Microsoft, a giant tech company that manufactures software. Starting the position in 2000, Ballmer was able to spend 14 years, before finally stepping down in 2014. However, before becoming the CEO of the company, he worked as employee No. 30, when he joined Microsoft in 1980 after dropping out of Stanford’s MBA program.

In 2014, after retiring from Microsoft, Ballmer was able to purchase the NBA’s Los Angeles Clippers for $2 billion. Also, in 2018, he was able to invest about $59 million in Social Solutions, a company that manufactures software for nonprofits and government agencies. Currently, Ballmer sits on the fifth position on the list of top 10 richest people in the world 2020, with an estimated value of $74.6 billion.

Mark Zuckerberg is a co-founder and the CEO of Facebook, a social media platform with over one billion active users. At the age of 19, Zuckerberg started Facebook at Havard in 2004. His aim at that time was to help students in the school match names with the photos of their classmates.

In May 2012, he was able to take the platform to the public, retaining about 15% of the stock. And in 2019 alone, the Menlo Park, California-based company generated total revenue of $70.7 billion.

Presently, Zuckerberg is the world’s fourth-richest person in 2020, with an estimated value of $90.8 billion.

Bernard Arnault is the richest man in France, and he oversees an empire of 70 different brands, including Louis Vuitton and Sephora.

In 2019, LVMH was able to purchase American jeweler Tiffany & Co, one of the biggest luxury brands, for $16.2 billion. Also in the same year, the company was able to spend $3.2 billion for Belmond, a luxury hospital group, which manages several river cruises, trains, and hotels.

Renault is currently the world’s third-richest person in 2020, with a total value of $94.5 billion.

Bill Gates, the world’s second-richest person in 2020, is a co-founder of Microsoft. He owns just 1% of shares of the company, after selling off or gifting most of it. However, he has now stepped down as a board member of the company.

Together with his wife Melinda, Bill Gates owns the world’s largest private charitable foundation, called the Bill & Melinda Gates Foundation. The aim of the foundation is to help improve global health and create equal chances for people across different countries of the world. Finally, talking about Bill Gates’ wealth, he has an estimated value of $115 billion.

Jeff Bezos is the founder of the giant e-commerce company, Amazon. He started the company out of his garage in Seattle, in 1994. He’s the CEO of the company and owns a total of 11.1% stake. Although the current coronavirus pandemic affected a lot of businesses, including Amazon, the company was able to hire about 175,000 additional workers. Last year, the Seattle-based company was able to generate an estimated revenue of $280.5 billion, with a net profit of $11.5 billion.