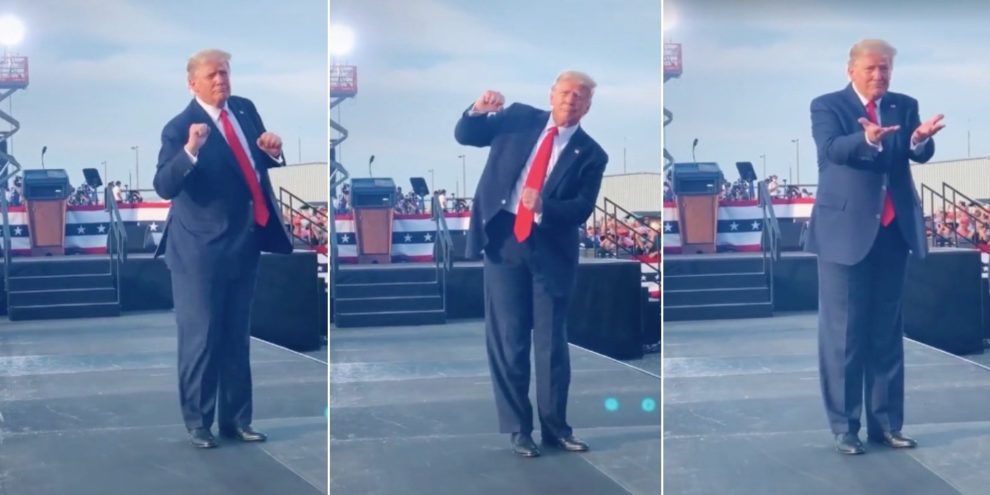 Donald John Trump, born in June 1946, is currently the president of the United States. He assumed office on January 20, 2017, becoming the 45th president of the country. Admittedly, Mr. Trump is popular for a lot of things, and one of them is his dance moves – which many people consider as awkward. According to a recent video, which has now gone viral across various social media platforms, the US president was captured dancing and pumping his fists to “Y.M.C.A.” by Village People. This incident happened last week, during a mega rally in Florida. So far, many people have started releasing their version of Mr. Trump’s dance moves on Twitter, TikTok, and a few other social media platforms. As such, we’ll be sharing with you, in this post, the list of the top 10 Trump dance videos that you’ll surely love to watch over and over again.

Occupying the first spot on our top 10 list of Trump dance videos is the original footage, showing the president dancing during the mega rally in Florida. According to @lxJoneZxl, who posted the video on Twitter, he said:

You can go ahead and watch the video of the President’s dance moves below.

As mentioned earlier, the videos of Mr. Trump’s quirky dance moves have now gone viral, and many of his fans have started creating their versions. According to the one created by @julia_keith_ on TikTok, the lady captured herself following the same moves as the president. After posting the viral TikTok video on Twitter, the president’s daughter Ivanka Trump commented on it, saying she likes the video.

You can check below to watch the video of the dance move.

Next on our top 10 list of Trump dance videos is the TikTok video created by Reza Jackson. So far, the video has gone viral on various social media platforms, including Twitter. According to @SharylAttkisson, who commented after seeing the video on Twitter, she said:

You can go ahead and watch the video below.

Another one on our top 10 list of Trump dance videos is the YMCA dance video during the recent Wisconsin rally. You can check below to watch the viral video, posted on Twitter by @PKitaDziedzic.

Next on our top 10 list of Trump dance videos is the House of Wings’ dance moves video. The clip was posted on Twitter by Grande Capo, who goes by the username @VoLinxx. Furthermore, the user said the current dance moves are the same as the one performed by Mr. Trump, during the House of Wings show back in 2014.

You can go ahead and check the dance moves below:

Donald Trump still has the same Chicken Dance moves from 2004. Who can dance better than Trump. GIFs only. pic.twitter.com/2W0KBYyNc6

Mr. Trump’s dance moves to Y.M.C.A reminded many people of dance moves from an episode of Seinfeld. Some of the people that noticed the dance move include Louis-Dreyfus and Jason Alexander, who are Seinfield’s cast members. According to Julia Louis-Dreyfus, she commented about the video, posted by The Lincoln Project, saying:

“First he stole all of Veep. Now he’s stealing from Seinfeld. Melanie deserves an Emmy for acting like she’s attracted to THIS.”

You can watch the video of the dance moves comparison below.

According to @csgulyas, the Twitter user posted an animated version of Mr. Trump’s dance move. You can check below to check the video (GIF).

Trump supporters on TikTok are starting to do the Trump dance he’s been doing at rallies FYI pic.twitter.com/1UjKlzGuFx

Occupying this spot on our top 10 Trump’s dance video is the one created by BlueLadg4929. You can watch the video, posted on Twitter by Scott Elliot, below.

Come on who’s going to join in the Trump dance?

You can also check below for the last video on our top 10 list of Trump’s dance videos.